“A QUICK walker, expert at all good works, with never a sour face”—such was the great St. Wilfrid, whose glory it was to secure the happy links which bound England to Rome. He was born about the year 634, and was trained by the Celtic monks at Lindisfarne in the peculiar rites and usages of the British Church. Yet even as a boy Wilfrid longed for perfect conformity in discipline, as in doctrine, with the Holy See, and at the first chance set off himself for Rome. On his return he founded at Ripon a strictly Roman monastery, under the rule of St. Benedict. In the year 664 he was elected Bishop of Lindisfarne, and five years later was transferred to the see of York. He had to combat the passions of wicked kings, the cowardice of worldly prelates, the errors of holy men. He was twice exiled and once imprisoned; yet the battle which he fought was won. He swept away the abuses of many years and a too national system, and substituted instead a vigorous Catholic discipline, modelled and dependent on Rome. He died October 12, 709, and at his death was heard the sweet melody of the angels conducting his soul to Christ.

Reflection. —To look towards Rome is an instinct planted in us for the preservation of the Faith. Trust in the Vicar of Christ necessarily results from the reign of His love in our hearts.
Lives Of The Saints By Alban Butler, Benziger Bros. Edition www.globalgrey.co.uk

ST. QUINTIN was a Roman, descended from a senatorial family. Full of zeal for the kingdom of Jesus…
byThe Fatima Center 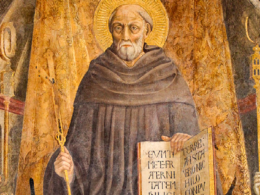 ST. JOHN GUALBERT was born at Florence, A. D. 999. Following the profession of arms at that troubled…
byThe Fatima Center

NICHOLAS, the patron Saint of Russia, was born toward the end of the third century. His uncle, the…
byThe Fatima Center

LEOCADIA was a native of Toledo, and was apprehended by an order of Dacian, the cruel governor under…
byThe Fatima Center