The fourth time Our Lady appeared was at the pasturage at Valinhos on the 19th of August, 1917. Coming to the children, shortly after they had been abducted and unjustly imprisoned in the nearby town of Ourem, the Blessed Virgin told the seers that they must continue going to the Cova da Iria on the 13th of each month. 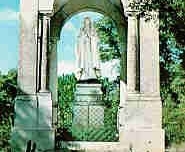 The present monument (pictured) was built by Hungarian Catholics persecuted by Communists for their faith and was publicly opened on August 12, 1956.

Continue on A “Virtual” Pilgrimage to Fatima