Fatima is Heaven’s intervention to save us from persecution, war, annihilation, enslavement and hell.

Fatima is a visit by Our Heavenly Mother Mary in our time for our time. It is a Message of concern, a practical plan for world peace, a promise of Heaven.

It is Heaven’s interventions to save us from persecution, martyrdom, war, enslavement or annihilation. Above all it’s a way to save our souls from hell. It is meant for you.

Today Our Lady, by Divine Providence, invites you to learn The Whole Truth About Fatima by giving you this opportunity to know Her beautiful Message of Fatima.

The Blessed Virgin Mary, the Mother of God, appeared 6 times to 3 shepherd children; Lucy, Francisco and Jacinta; between May 13 and October 13, 1917. She came to the little village of Fatima which had remained faithful to the Catholic Church during the recent persecutions by the government.

She came with a message from God to every man, woman and child of our century. Our Lady of Fatima promised that the whole world would be in peace, and that many souls would go to Heaven if Her requests were listened to and obeyed.

She told us that war is a punishment for sin; that God would punish the world for its sins in our time by means of war, hunger, persecution of the Church and persecution of the Holy Father, the Pope, unless we listened to and obeyed the commands of God.

At Fatima, Pope John Paul II said on May 13: “the Message of Fatima is more relevant and more urgent” than when Our Lady first appeared. The message is an anguished appeal of Our Heavenly Mother, Who sees us in great danger and Who comes to offer Her help and advice. Her message is also a prophecy, a clear indication of what was about to transpire in the 20th Century, and what is still going to happen infallibly in the near future, depending on our response to Her requests.

The Catholic Church has endorsed the Fatima Message since 1930. Five successive Popes have publicly indicated their approval of the apparitions of Our Lady at Fatima and Her message. Two Popes went to Fatima on Pilgrimage. Pope John Paul II went there twice, once on May 13, 1982 and again on May 13, 1991.

As a great sign of this whole message truly coming from God, a marvelous miracle was worked in the sky above Fatima before 70,000 witnesses on October 13, 1917, at the time, date and place that Lucy and the other two children had prophesied in the name of Our Lady of Fatima.

As also prophesied, Francisco and Jacinta died very soon after the apparitions of 1917 — in 1919 and 1920, respectively — while Lucy remained in this world for many years, serving Our Lord instrumentally as a Carmelite nun to make His Blessed Mother better known and loved.

Our Lady of Fatima continues to work miracles today through Fatima water which is sent from Fatima around the world. This Fatima water sprang up in Fatima at the spot the Bishop told people to dig, very near where Our Lady appeared at the Cova da Iria (the Cove of Peace) in Fatima. Still other people are cured when they go on pilgrimage to Fatima, which is about 90 miles north of Lisbon, Portugal.

When he went to Fatima, Pope John Paul II said: “The Message of Fatima is addressed to every human being.”

A message of warning and hope

If we do not heed Her soon, then Our Lady’s terrifying prophecy may well be realized in the near future even in our own back yards.

She told us that God had chosen to use Russia as the instrument of chastisement to punish the whole world if we did not, by our prayers and sacrifices, and obedience to Her requests (especially those requests for consecration and Reparation) obtain the conversion of Russia to the Catholic faith.

She promised us, “If My requests are granted Russia will be converted and there will be peace”.

But She also warned us, “If My requests are not granted, Russia will spread her errors throughout the world raising up wars and persecutions against the Church, the good will be martyred, the Holy Father will have much to suffer, various nations will be annihilated.”

She has told us that the whole world (the part surviving) will be enslaved by the atheistic tyrants of Russia.

In order to prevent these chastisements from befalling us She told us that special Reparation for sins committed against the Immaculate Heart of Mary was necessary, particularly the Communions of Reparation on the First Saturday of five consecutive months and the public and solemn Consecration of Russia to the Immaculate Heart of Mary by all the Catholic Bishops of the world, together with the Pope on the same day at the same hour.

In the end Our Lady must triumph

Finally Her message is a promise of the eventual triumph of Her Immaculate Heart over evil. She promised that no matter how black it might get in the future (and it seems that is the path chosen by most of humanity today) that in the end She will triumph, Her requests would finally be granted by mankind and there will be world peace.

What you must do

It is up to each of us to listen, to read, to learn and to apply this Heavenly message in our own lives, particularly by praying the daily Rosary. To the extent we can, we must also do all we can to see to it that this final warning from Our Heavenly Mother is spread and that its significance is explained to everyone before it is too late. We must not be complacent in the promise of Her eventual triumph because it is still dependent on our co-operation with God’s grace and His plan outlined at Fatima. 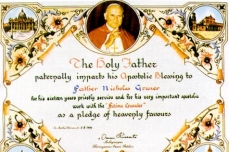 This prophetic message goes against certain peoples views and short-term vested interests. This opposition comes not only in the form of open hostility such as was manifested in the early days when the three children were kidnapped and threatened with death in 1917 for repeating Our Lady’s message; and bombing, in 1922, the first Chapel built there. But the opposition to Our Lady of Fatima today is also manifested in more subtle forms.

The devil knows that when Our Lady’s full Fatima Message is widely proclaimed, properly understood, loved and obeyed then his evil empire on earth will be destroyed. So the devil and his human agents, and well meaning but terribly misguided people that serve them have launched a counter-offensive against the Fatima Message to obscure it and cause enough confusion so that the Faithful do not obey Our Lady and react in time.

Up to now the devil has been somewhat successful in obstructing the full Fatima Message. You need to be informed. This booklet and the three volumes of The Whole Truth About Fatima and many other books are your best weapon against the deception spread against Our Lady’s Fatima Message.

You need to help others come to know, understand, love and obey Our Lady of Fatima and Her full Fatima Message. Contact the Fatima Center for our full catalog of books and periodicals, our TV and Radio tapes and programs on Fatima and pass the word on every way you can.

She is relying on all of us to do our part. At least all of us can pray the Rosary. All of us can tell a friend or pass on a copy of this booklet to a neighbor. All of us have some special need or intention to ask Our Lady’s powerful intercession. Pray to Our Lady of Fatima and She will help you. She will also richly reward you for all you do to make known and understood Her maternal message of love and warning given at Fatima.