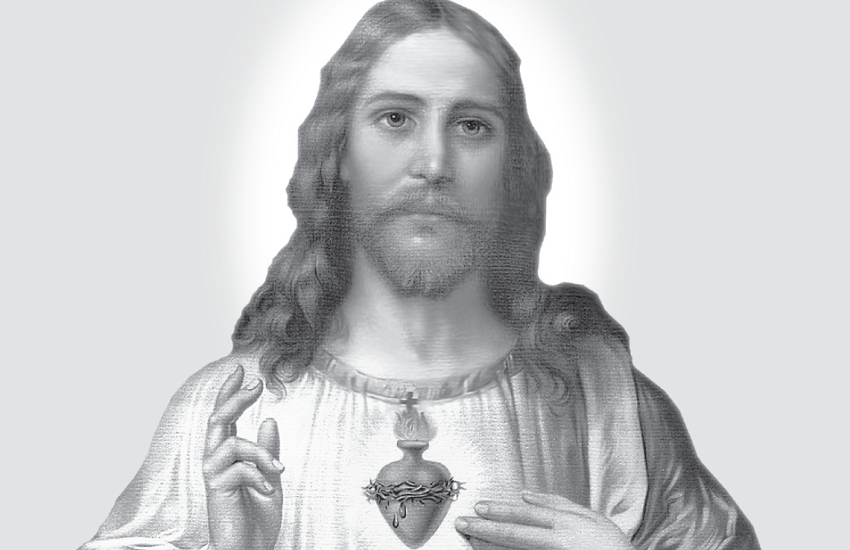 Devotion to the Sacred Heart of Jesus – VL201

“Behold this Heart! which has so loved men as to spare Itself nothing, even to exhausting and consuming Itself, to testify to them Its love, and in return I receive nothing but ingratitude from the greater part of men by the contempt, irreverence, sacrileges, and coldness which they have for Me in this Sacrament of My love.” (Our Lord to St. Margaret Mary)

Month of the Sacred Heart
June 2019

We are happy to be able to send with this letter a new leaflet, The Devotion to the Sacred Heart of Jesus, which describes a devotion given to us by Our Lord.

It is likely you have read in our apostolate literature numerous times in the past, two key statements of Our Lord Jesus Christ linking the Message of Fatima to the Devotion to His Sacred Heart.

The first, which is mentioned in the enclosed leaflet under the subheading: The Devotion to the Sacred Heart and the Message of Fatima, is Our Lord’s response to an inquiry of Sister Lucia, asking why He will not convert Russia without the Pope’s cooperation.

His response makes it very clear that He will not convert Russia without the cooperation of the Pope in union with the bishops publicly consecrating Russia to the Immaculate Heart of Mary for the following reason:

The second is the message of warning to the Pope and bishops given by Our Lord to Sister Lucia at Rianjo, Spain in 1931:

“Make it known to My ministers, given that they follow the example of the King of France in delaying the execution of My command, like him they will follow him into misfortune.”

What is He referring to? Besides teaching Saint Margaret Mary the Devotion to His Sacred Heart, Our Lord gave her a special request to convey to the King of France, King Louis XIV.

The King was commanded by Jesus to consecrate France to His Sacred Heart in a public ceremony. King Louis XIV and his two successors ignored the requests of Our Lord given on June 17, 1689.

Whether or not the kings were aware of the diabolical plot of the enemies of Christ – the freemasons – to rid the country of their monarch and the precious Catholic Faith, only God knows.

Writers of the “French Enlightenment” were influencing the people and paving the way for the revolution making their anti-Catholic agenda known – writers such as Voltaire (1694 – 1778) who wrote: “Every sensible man, every honorable man must hold the Christian religion in horror”; or Denis Diderot (1713 – 1784) who wrote: “Man will never be free until the last king is strangled with the entrails of the last priest.”

The cost of ignoring Our Lord’s request was one of the most dramatic social upheavals in history, known as the French Revolution (1789 – 1799), which reshaped Europe and the world. The absolute monarchy was toppled and the nobility was divested of their hereditary power and the Catholic Church was subordinated to the French government.

One hundred years after Our Lord’s request, the reigning King of France – Louis XVI – was stripped of his power and four years later (1793) was publicly executed by guillotine.

The French Revolution’s ideals of “liberty, equality, and brotherhood” (terminology which all Americans are familiar with),  were combined with a program of dechristianization.

The revolutionaries were acting on the philosophies proposed by the anti-Catholic writings of the “Enlightenment” period. The Revolution involved waves of massacres. Within the first four days of the revolution, 1,300 assassinations took place in Paris.

Contemplative religious communities were the first objects of the fury of the revolutionaries, with staggering numbers of innocent people slaughtered. Shortly after the beheading of the King, began what is called the Reign of Terror, hunting down those who (rightfully) protested the revolution.

All Church property was seized, convents and monasteries were suppressed, and priests were forced to serve as employees of the State, swearing an oath to the Revolution and denying loyalty to the Pope. The Blessed Sacrament was desecrated, churches and their contents were destroyed. Priests and bishops who refused to take the oath were brutally massacred. Priests and nuns were tied together and drowned, while cloistered and other groups of nuns were guillotined.

Those living in the region in the western part of France known as the Vendee, refused to join the revolutionaries, remaining loyal to both the King and the Church. The revolutionary government of the First Republic sent 45,000 troops to face the Catholic and Royal Army of the Vendee. After the initial victories of the people of the Vendee, the same committee responsible for the Reign of Terror ordered the destruction of the Vendee and its inhabitants.

The Republican army destroyed crops and farms, razed towns and villages, ransacked churches, burned down forests (a complete scorched earth policy), and murdered with appalling cruelty, everyone in the area: young, old, Catholic or Republican.

More than one source (including The Institute of World Politics) termed this massacre as genocide, with the number of those murdered greater than the genocide during world war II.

As part of the dechristianization, the Catholic Gregorian calendar, the seven day week, and the Sunday day of rest and worship were all eliminated. Holy days and Saints’ feasts were banned. Churches and cathedrals such as Notre Dame de Paris became temples of the new cults.

The diabolical French Revolution driven by the freemasons resulted in the complete undermining of the political influence of the Catholic Church. From this revolution came the anti-God brainwashing spiel of “separation of Church and state.” This false idea – fallout from the French Revolution – has spread throughout the world, with subsequent anti-Christ laws worldwide.

France, referred to as “the eldest daughter of the Church,” is no longer recognizable as a Catholic country with only 1.8% of the entire population being regularly practicing Catholics.

Had the King heeded the request of Our Lord, publicly consecrating his country to the Sacred Heart of Jesus, France would have been spared this horrible revolution and the rest of the world spared the diabolical fallout.

Thus Our Lord’s warning to successive Popes and bishops who continue to ignore Heaven’s request for the public Consecration of Russia to the Immaculate Heart of Mary.

For more copies of the enclosed leaflet, The Devotion to the Sacred Heart of Jesus, call us at 1-800-263-8160 or return the enclosed reply form.