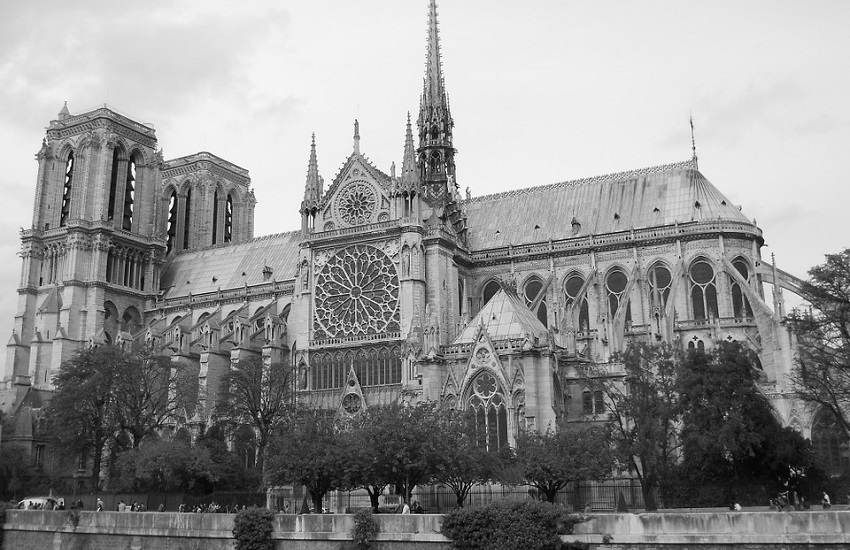 “In God, She [the Blessed Virgin Mary] sees all our miseries; no yearnings, no breathing escapes Her. She sees through the deepest secrets of our hearts; She knows also the state of our souls; our dangers, our necessities, our tribulations, are naked and open to Her eyes, as is a picture to the eyes of those who look upon it.” … Mary, the Model and Mother of Christians (1878) by Rev. F. Gabrini, S. J.

On April 15, Monday of Holy Week – within the Octave of, and still making reparation for, the sorrows of Our Lady – Catholics around the world watched in tears and with sadness, news outlet coverage of the burning of one of the most renowned and highly visited Catholic sites in the world – built and named in honor of Our Lady – the Cathedral of Notre Dame in Paris.

Once again many in the world were united watching yet another sad and unthinkable event – another of the many unsettling and horrifying occurrences that have become much too common.

While the fire was still burning out of control and no possible investigation of the cause could have yet begun, major – and let’s face it, government-controlled – news outlets immediately began crushing any thoughts about arson by suggesting the possibility of the fire being an accident attributed to the restoration work under way in the Cathedral.

Generally when news outlets react with such speed to strongly promote an idea as if it were an irrefutable absolute – and in this case even before any serious investigation could likely begin – it means truth of some sort is being covered up.

Fortunately many others who recognize the non-ethical and government controlled practices of many of the major news outlets, and who are not afraid to use the brain God gave them,  are looking at other possible – and maybe even more realistic –  causes. Especially given the current state of the world and the warnings of Our Lady of Fatima.

It is not unreasonable to contemplate causes other than the proposed “accident” theory, given that we are in a time when many have rejected or abandoned Our Lord and His one true Church; a time when the sins and offenses committed against the Mother of God have grown to such a proportion, that God sent Her as His Messenger, more than 100 years ago, to ask that reparation be done at least once a month for the horrible blasphemies committed against Her Immaculate Heart. Now, a century later, and the blasphemies against Our Lady have grown to unthinkable proportions.

In his April 16 article on our apostolate website, here is some information that Christopher Ferrara reminded Catholics and others of good will to consider:

“We don’t yet know who or what started the fire that ravaged Notre Dame Cathedral, although we have the right to be skeptical of the Parisian authorities’ immediate ‘ruling out’ of arson as the cause of the conflagration, given the context of hundreds of acts of vandalism and desecration of Catholic churches in France over the past three years, including a fire at the Church of St. Sulpice, the second largest church in Paris. Then there was a foiled plot by ‘three female jihadists’ to blow up Notre Dame itself with a car bomb back in 2016.  Nor can the occurrence of this disaster precisely during Holy Week be dismissed out of hand as a mere coincidence.”

Other Catholic writers and bloggers have likewise strongly suggested that this was no accident. Here is a small excerpt from an article written by Ed Faust:

“Before the burning of Notre Dame, hundreds of Catholic churches throughout France were vandalized by Muslims, including the Basilica of St. Denis … in Paris. Priests were attacked and one had his throat slit during Mass… Throughout the world, including in France, Muslims cheered the destruction and some threatened more fires to follow.”

Whether or not it was an accident or deliberate, whether it was started by enemies of Our Lord and Our Lady or not, it is necessary that we remember (and remind others) in these times of crisis and chaos in the Church and an increasingly unsettled world, that no matter what happens, whether intentionally or by accident, no matter who the enemy is or what he thinks he can get away with, God is ultimately in charge and infinitely much more powerful!

And what should give us even greater joy is the knowledge that by God’s design, our heavenly Mother and Queen is also more powerful than all our enemies. She is the one Whom God has ordained to crush the head of the serpent and with him, all his willing human helpers.

Enclosed with this letter is a prayer card that was printed and mailed to many for the first time this past Christmas and has just been reprinted for distribution.

On the back is the powerful prayer invoking the aid of the “Majestic Queen of Heaven”, asking Her to send forth the legions of Angels to defend us and to drive away all the evil spirits who are wreaking so much havoc in the Church and the world.

The end of the prayer also appeals directly for help from the Angels and Archangels. Our Lady is Queen of Heaven and Earth, and of Angels, saints and men. We cannot begin to imagine the God-given power She has. She is our Queen, our helper, our advocate, our protector, our Mother. As the words of the prayer Hail Holy Queen (Salve Regina) state, She is our life, our sweetness and our hope. Call on Her without doubt, without hesitation.