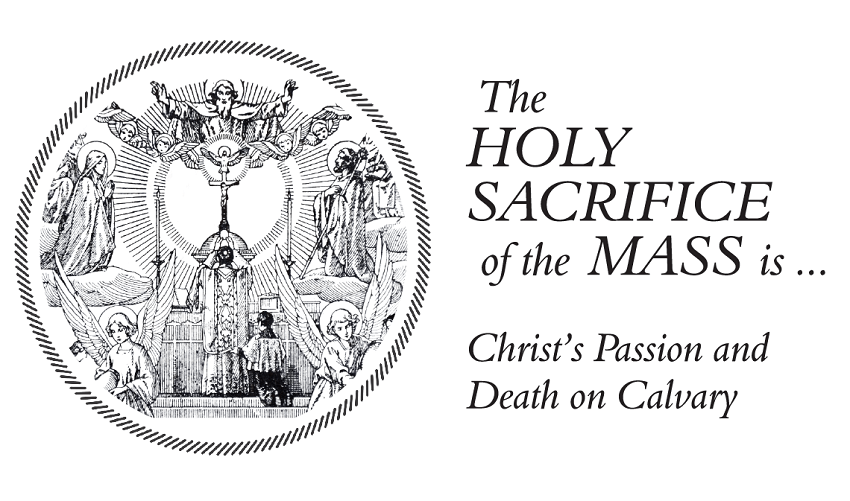 The Holy Sacrifice of the Mass – VL198

“I declare, to me nothing is so consoling, so piercing, so thrilling, so overcoming, as the Mass… It is not a mere form of words, it is a great ACTION – the greatest action that can be on earth. …He [Our Lord] becomes present on the altar in flesh and blood, before Whom angels bow and devils tremble.”

Saint Leonard of Port Maurice (13th C.) – considered one of the great orators of the Church whose sermons were sought after and attended by the popes during his priestly life – said, our best friend when we stand before Our Lord for judgement will be the number of Masses we have heard.

“The Mass is the liturgical rite whereby the Catholic Church from the last supper, until this very day, has celebrated throughout the world the divine mystery of the passion and death of Our Lord Jesus Christ.” (John H. Matthews, quoted in the Fr. Lasance Mass Missal)

The Holy Sacrifice of the Mass is the most powerful form of prayer and has four ends: Adoration, Thanksgiving, Reparation and Petition. It is offered to God – first, to adore Him; second, to thank Him for His favors; third, to obtain the pardon of our sins; and fourth, to ask for the graces we need.

Unlike the sterile service of the Protestants (men who rebelled against Christ’s true Church and rejected His laws), the Catholic Mass is a sacrifice where the Divine King, Almighty God Himself, is present – a claim that no Protestant or believer of other false creeds can make.

In his book, The Hidden Treasure, St. Leonard describes the Mass as follows:

“The principal excellence of the most holy sacrifice of the Mass consists in being essentially, and in the very highest degree, identical with that which was offered on the cross of Calvary: with this sole difference, that the sacrifice on the cross was bloody, and made once for all, and did on that one occasion satisfy fully for all the sins of the world; while the sacrifice of the altar is an unbloody sacrifice, which can be repeated an infinite number of times, and was instituted in order to apply in detail that universal ransom which Jesus paid for us on Calvary.

“So that the bloody sacrifice was the instrument of redemption; the unbloody is that which puts us in possession [of grace]: the one threw open the treasury of the merits of Christ Our Lord; the other affords the practical use of that treasury.

“And, therefore, observe that in Mass there is made not a mere representation, nor a simple commemoration of the passion and death of the Redeemer, but there is performed, in a certain true sense, the selfsame most holy act which was performed on Calvary.

“It may be said, with all truth, that in every Mass Our Redeemer returns mystically to die for us, without really dying, at one and the same time really alive and as it were slain – ‘I saw a Lamb standing as it were slain’ (Apoc. 5:6).”

On the Feast of the Nativity of Our Lord, “there is represented by the Church the birth of the Lord, but Our Lord is not then born. On the day of the Ascension and on the day of Pentecost, there are shadowed forth the ascent of the Lord to Heaven, and the coming of the Holy Spirit down to the earth; yet it is by no means true that, as each of these days comes round, the Lord again ascends to Heaven, or the Holy Spirit visibly descends to earth.

“But the same cannot be said of the mystery of the holy Mass, for in it there is made no simple representation of a bygone event, but the selfsame sacrifice is unbloodily made which, with the shedding of blood, was made upon the cross.

“That same body, that same blood, that same Jesus Who then offered Himself upon Calvary, now offers Himself in the holy Mass. In Mass there is effected, there is continuously practiced, that same sacrifice which was made upon the cross. …

“Now, tell me whether, when you enter church to hear Mass, you thoroughly well consider that you are going up as it were to Calvary, to be present at the death of the Redeemer.

“If so, would you go with behavior so unsubdued, with dress so flaunting [or immodest]? … But what shall be said if you profane those functions of most dread sanctity with nods and becks [waving to others], with tattle [chatter], with laughter, with the petty attentions of courtship, or with graver sacrileges of thought, word, or deed?

“Wickedness is hideous at any time, and in any place; but sins committed during the time of Mass, and before the altar, draw down after them the curse of God. Jer. Ch. 48:10″ (“Cursed be he that doth the work of the Lord deceitfully [negligently].”)

The proper way to assist at the Holy Sacrifice of the Mass is to pray the prayers of the Mass (in either Latin or English) along with and in union with the Man-God Christ Jesus celebrating in the person of the priest. For it is Our Lord Himself Who condescends “for our good to transubstantiate the bread and wine into His most holy body and into His most precious blood.”

“Behold, then, the chiefest privilege of holy Mass, to have for priest God made man; and when you see the celebrant at the altar, know that his highest dignity consists in being the minister of that invisible and eternal Priest, Our Redeemer Himself.

“Hence it results that the sacrifice itself does not cease to be agreeable to God, although the priest who celebrates may be wicked and sacrilegious, seeing that the principal offerer is Christ Our Lord, and the priest is His mere minister.”

Enclosed is a new leaflet, The Holy Sacrifice of the Mass Is Christ’s Passion and Death on Calvary (LF412 printable version -folds in half / viewable web version).

It provides pious reflections on the actions and prayers of the priest offering the Mass with Christ’s Passion and death renewed on the altar. It is hoped that these reflections will serve as a reminder and a teaching aid regarding the renewal of Christ’s sufferings for us at each and every Mass and increase the fervor of those present.

May you find this leaflet edifying and of spiritual assistance.