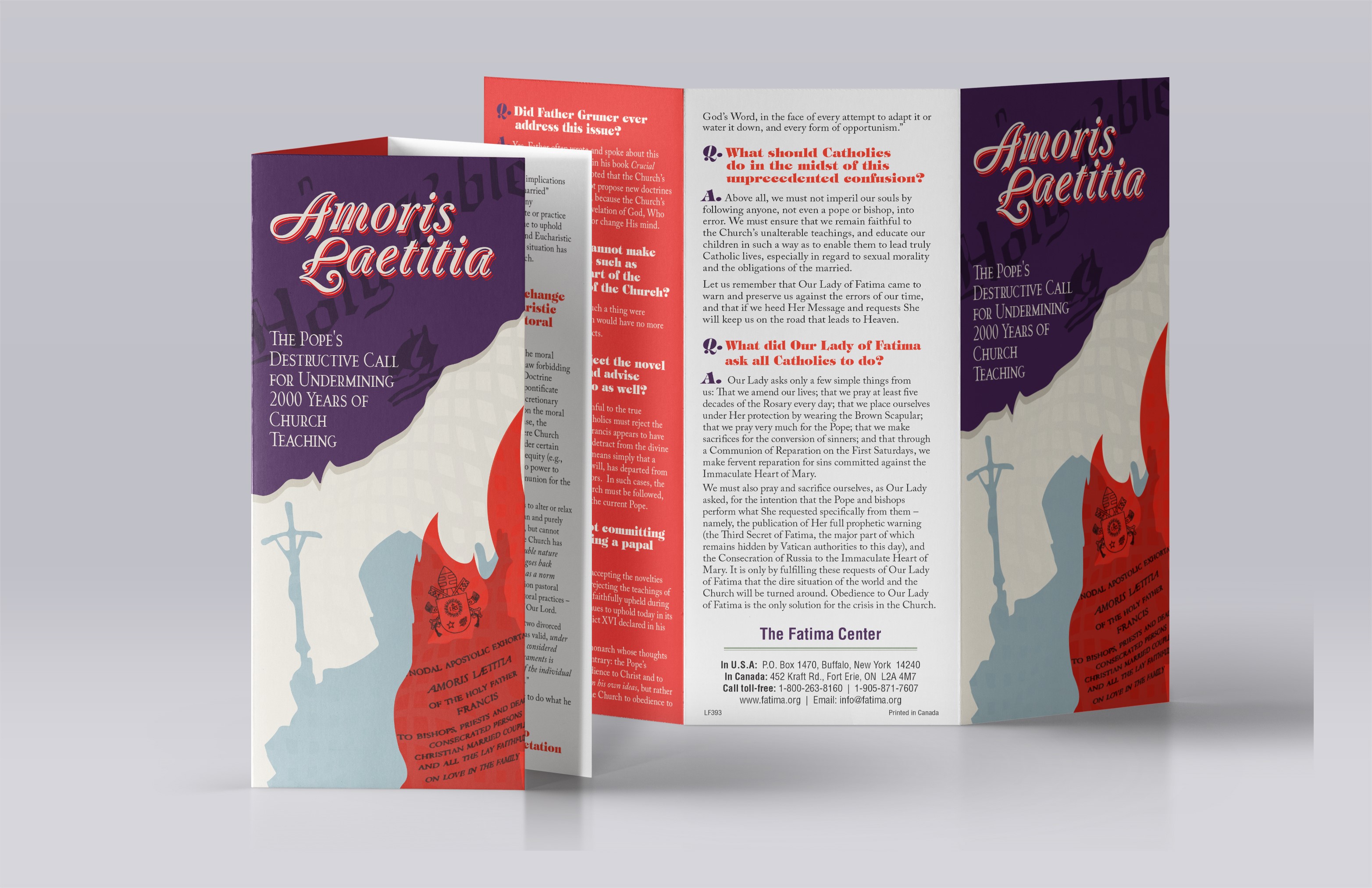 Marriage and the Family are Under Attack – VL193

“The Apostolic Exhortation [Amoris Laetitia] is an open act challenging two thousand years of Catholic teaching. And in Catholic circles people are shocked and struck dumb in bewilderment.”

In the last few years, we have received many calls asking questions about the Pope. While the actual questions asked may vary, they are nonetheless related. Questions such as:

“What’s going on with the Pope?”
“Is it true the Pope said people who are in a second marriage (i.e. divorced and ‘remarried’ without an annulment) can now go to Communion?”
“My parish priest told a couple who are divorced and ‘remarried’ that now they can receive Communion because that’s what the Pope wants…”
“Is it true that the Pope said there is no hell?”

You get the picture.

The fact is that the above is just a small sampling of the many non-Catholic statements the Pope has been making in the last five years. And as time passes, his verbal attacks on 2000 years of Catholic teaching are increasing and involve a number of different areas of the Catholic Faith.

Despite these calls, the overall impression is that many Catholics are unaware of the attacks against the Catholic Faith coming right from Pope Francis himself.

Marriage and the Family are Under Attack

But by far, the area that has been, and continues to be attacked the most is the family and the teachings of the Faith pertaining to it.

Enclosed with this letter is a new leaflet: Amoris Laetitia, with its title taken from that of a voluminous apostolic exhortation released by Pope Francis on April 6, 2016, which undermines 2000 years of Church teaching and opens the door for Holy Communion to Catholics who are divorced and “remarried” on a “case-by-case” basis.

Written in a question and answer format, this leaflet is intended to help Catholics understand that not only do they not have to follow the Pope with regard to what he is promoting in the exhortation, but in fact, why they absolutely cannot follow the Pope in these errors. To do so would be to abandon Christ Himself.

The leaflet also addresses some of the questions Catholics have asked regarding Amoris Laetitia. We hope this leaflet helps Catholics better understand why the Pope’s exhortation is considered an attack on Christ’s teachings.

Also enclosed is Issue 117 of The Fatima Crusader, published in the Winter of 2016, which contains two articles to further the understanding of the errors of Amoris Laetitia and the attacks against the family: “The Dismantling of Morals and Marriage” (page 38), by John Vennari, which is about Amoris Laetitia; and “The Sacrament of Matrimony” (page 47), which covers Catholic teaching on Marriage from the Catechism of Pope Pius X.

I hope you will find these two publications a help to you especially when you are called upon to explain true Catholic teaching or when called upon to defend the Faith.

Not Surprising For Fatima Center Supporters

As stated in previous letters to volunteers, Pope Francis is the culmination of a succession of popes in the last 60 years (with the exception of John Paul I, who died 33 days after being raised to the papacy) who have veered in a number of ways from Catholic teaching.

That he is the worst Pope in the history of the Church should come as no surprise to long-time volunteers and supporters of The Fatima Center.

Father Gruner and Our Lady’s apostolate have been warning for decades in our apostolate publications, in conference talks, TV shows, etc. that this would happen. That the great apostasy – or great falling away from the Faith foretold in Sacred Scripture (the book of the Apocalypse)- will begin at the top.

According to Cardinal Ratzinger (Pope Benedict XVI), Cardinal Ciappi and others (who have read the Third Secret), the great apostasy beginning at the top is part of the Third Secret – the part that has yet to be revealed.

Pope Francis and his apparent agenda of leading millions away from the One True Church established by Jesus Christ should be understood by those of us familiar with the Message of Fatima, as all part of the punishment for ignoring the requests made by Our Lady 101 years ago.

And of course we also understand that it will continue to get worse in the Church and subsequently in the world, until Her requests are heeded first by the Catholic laity, and then finally by the Pope and the Catholic bishops.

Because of the crisis in the Church, many of us have been affected where it hurts the most – in our families. And though it is painful to watch what is happening in the Church, in the world, and among our own loved ones, one consolation is that we know there is a simple solution which will turn the Church and the world around.

“My Immaculate Heart Will Be Your Refuge“

We know that not only will this horrible ugliness in the Church and the world end with the Consecration of Russia to the Immaculate Heart of Mary, but that when it ends, it will result in something magnificent. We really have something so beautiful, yet unimaginable, to look forward to.

And when Our Lady told the three children-seers at Fatima:

“My Immaculate Heart will be your refuge and the way that will lead you to God”, She is telling us to trust Her, to stay with Her, to hold Her hand (holding Her rosary is holding Her hand)  and let Her guide us. She also wants us to remember that God has everything under control and He has given us a simple solution.

So let’s stay with Her, do as She asked of us, and spread Her message helping other souls as well.