This Is a World Depopulation and Control Program – Part II

In the First Part of this article, I addressed the deception of a ‘sustainable’ future, the sin of abortion, and the devil’s grand ambition of depopulating the earth – eliminating all those humans created in the image and likeness of God, which he hates so virulently.

The plans for what we are experiencing today were laid years ago. In May 2010 the Rockefeller Foundation published a report entitled: “Scenarios for the Future of Technology and International Development.”[1] In it were described various imagined scenarios for the future of the world – one with a substantially smaller, controlled population. One of them, called “Lock Step,” contains the following passages. As you read them, please keep in mind that this was written more than a decade ago![2]

“In 2012, the pandemic that the world had been anticipating for years finally hit. Unlike 2009’s H1N1, this new influenza strain – originating from wild geese – was extremely virulent and deadly. Even the most pandemic-prepared nations were quickly overwhelmed when the virus streaked around the world, infecting nearly 20 percent of the global population and killing 8 million in just seven months, the majority of them healthy young adults. The pandemic also had a deadly effect on economies: international mobility of both people and goods screeched to a halt, debilitating industries like tourism and breaking global supply chains. Even locally, normally bustling shops and office buildings sat empty for months, devoid of both employees and customers.”

“… China’s government was not the only one that took extreme measures to protect its citizens from risk and exposure. During the pandemic, national leaders around the world flexed their authority and imposed airtight rules and restrictions, from the mandatory wearing of face masks to body-temperature checks at the entries to communal spaces like train stations and supermarkets. Even after the pandemic faded, this more authoritarian control and oversight of citizens and their activities stuck and even intensified. In order to protect themselves from the spread of increasingly global problems – from pandemics and transnational terrorism to environmental crises and rising poverty – leaders around the world took a firmer grip on power.”

“Citizens willingly gave up some of their sovereignty – and their privacy – to more paternalistic states in exchange for greater safety and stability. Citizens were more tolerant, and even eager, for top-down direction and oversight, and national leaders had more latitude to impose order in the ways they saw fit. In developed countries, this heightened oversight took many forms: biometric IDs for all citizens, for example, and tighter regulation of key industries whose stability was deemed vital to national interests.”

“… Even those who liked the greater stability and predictability of this world began to grow uncomfortable and constrained by so many tight rules and by the strictness of national boundaries. The feeling lingered that sooner or later, something would inevitably upset the neat order that the world’s governments had worked so hard to establish.”

Three other scenarios were also envisioned, and were called: 1.) Hack Attack, 2.) Smart Scramble, and 3.) Clever Together. They were based on different levels of political and economic alignment, and adaptive capacity. The message was clear: More global government control is better, and we need a much smaller human population.

Just before the COVID-19 panic hit, the Bill and Melinda Gates Foundation hosted Event 201, a high-level pandemic exercise on October 18, 2019.[3] The website says that: “A severe pandemic, which becomes ‘Event 201,’ would require reliable cooperation among several industries, national governments, and key international institutions.” Again, the message is that global governance is required to address problems like a pandemic.

The Bill and Melinda Gates Foundation is also known for funding population-control programs. Bill Gates even admitted in a 2010 TED talk[4] that vaccines, health care, and reproductive health services could be used to lower the world’s population by up to 15%.[5] That would be 1.2 billion people out of the current eight billion. In that talk, there was an emphasis on reducing carbon dioxide (CO2), which is generated by just about every kind of human activity – including breathing.

THE VATICAN IS ON BOARD

Unfortunately, the Vatican is not only failing to even slow down this satanic world depopulation and control program, it is aiding and abetting it. Pope Francis makes a habit out of inviting globalists to the Vatican for various conferences which generally have to do with the environment or ecumenism. The Vatican’s relationship with China makes it appear that the Chinese have undue influence. It has even been suggested that the financial problems in the Vatican are making it dependent on Chinese donations, even while China mercilessly persecutes Catholics who refuse to join the Communist Patriotic Catholic Association.

Former Cardinal McCarrick has ties to both China and the homosexual lobby. The recent homosexual scandals in the Vatican make it more open to blackmail or bribery. Certain Church officials have even been implicated in child trafficking. The worship of the Pachamama idol in October 2019 cannot have brought down any blessings from Heaven. The endless meeting with Muslims and other non-Catholics, combined with ambiguous or outright scandalous statements from Pope Francis, have prompted many people to wonder if the Pope is Catholic.[6]

However, it is certain that Francis – like Bill Gates and Anthony Fauci – wants everyone to be vaccinated. Francis even had the audacity to say it is an act of charity to get vaccinated. This has made it difficult for Catholics to get a religious exemption to the vaccine.

Meanwhile, Francis seems to have mercy on everyone except those ‘rigid traditional Catholics.’ The only sin apparently recognized by him is that of being too Catholic or perhaps not taking sufficient care of the environment. He has made it clear that he desires to eradicate the Traditional Latin Mass, whose roots trace back to Apostolic time! Most of the world’s bishops are complicit in this suppression. A rumored implementation document should make it clear just how far and how fast the Vatican intends to go.

In the final installment of this article, I will discuss our duty to resist and the inevitable triumph of the Immaculate Heart of Mary.

[2] Note that the “Lock Step” scenario was actually envisioned for 2012 – not 2020. Apparently, we were able to delay it for a while. Perhaps the growth of the Traditional Latin Mass played a part in forestalling this global plandemic?

[4] A TED talk is a short (maximum 18 minutes) video of a presentation given at a TED (Technology, Entertainment, Design) conference or other event, intended to present new ideas (on any topic) relevant to a broad, international audience.

[6] Stop for a moment and truly consider the import of this. Regardless of your position on the matter, the mere fact that many reasonable and well-intentioned Catholics question if the Pope holds the Catholic Faith is a dramatic and terrible sign of how great the crisis is today. Our Lady of Fatima most likely addressed this coming travesty. Don’t forget the Vision in the Third Secret. Sister Lucia said the children saw in the immense light of God’s truth: “something similar to how people appear in a mirror when they pass in front of it, a Bishop dressed in White. We had the impression that it was the Holy Father.” [emphasis added] Why would she say they had the impression it was the Pope instead of simply declaring that it was the Pope? Why this strange phrase about a mirror, which only reflects a thing without containing the real thing itself? Mirrors are notoriously used for illusions and sleight of hand deceptions. Is it no wonder that the Third Secret was not fully revealed in 2000? 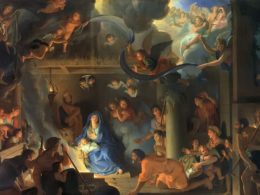 A BLESSED AND JOYOUS CHRISTMAS! from The Fatima Center

“While all things were in quiet silence, and the night was in the midst of her course, O…
byThe Fatima Center 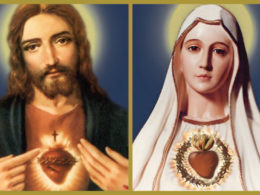 The Fatima Center wishes you a blessed and grace-filled feast of the Most Sacred Heart of Jesus! “Behold…
byAndrew Cesanek
67 shares
67
0
0
0
No comments 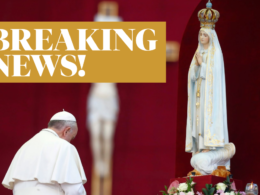