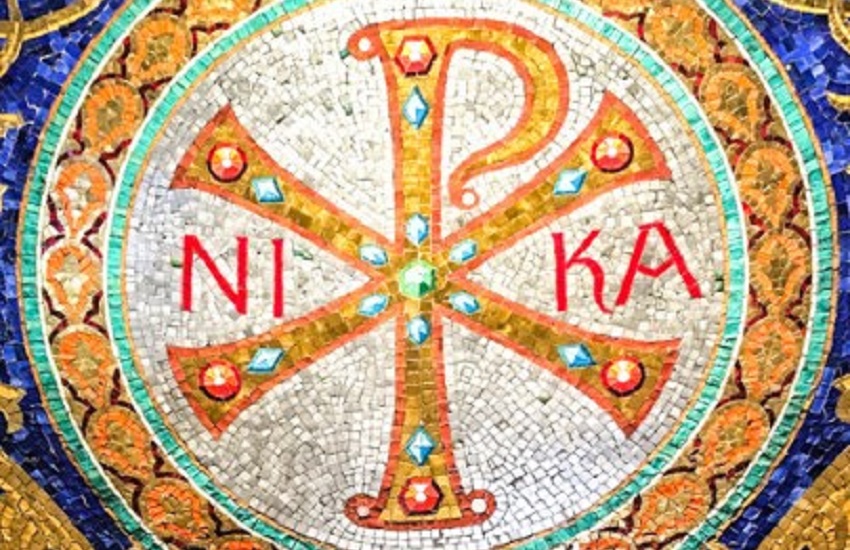 “…with the cross of Jesus / going on before!” 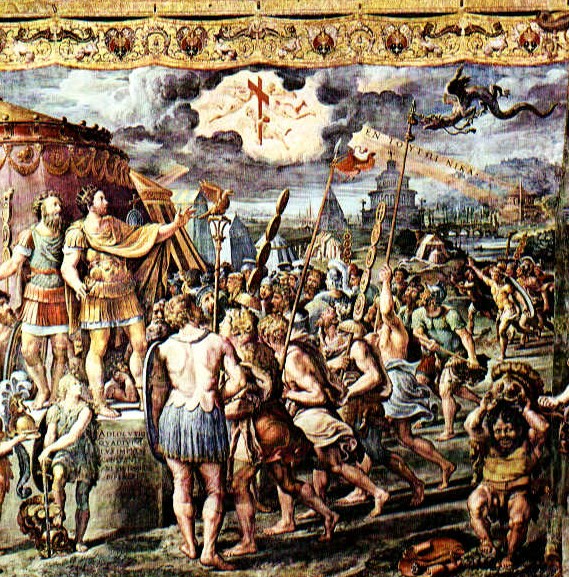 “In hoc signo vinces!” said Jesus, in a dream, to Constantine, the first Christian emperor of Rome. We know him now as Constantine the Great.

Bishop Eusebius of Caesaria tells us that Constantine was leading his army in the field when he looked up at the sun and saw a cross of light above it, and with it the Greek words “ἐν τούτῳ νίκα” (en toútōi níka), rendered into Latin as “In hoc signo vinces” — “In this sign, you will conquer!”

At first, Constantine did not know the meaning of the apparition, but the next night, he had a dream in which Christ explained to him that he should use the sign of the cross against his enemies.

Lactantius, an early Christian author and advisor to Constantine, tells us Constantine’s soldiers had the Chi Rho — the symbol representing the first two letters of the Greek spelling of the word “Christos” — inscribed on their helmets when they fought against the rebel Maxentius at Milvian Bridge in 312 A.D., a battle which Constantine’s army won decisively.

For centuries afterwards, Christian armies carried the cross, emblazoned on their armor and flags, before them against non-believers and other enemies of the Church and the Faith. Look at paintings of the Crusaders, of St. James helping Spanish Christians conquer the Muslim Moors, of Lepanto, and other battles for preservation of Christian civilization, and you will see the Cross of Christ in the fore.

In spiritual and political battles, as in armed conflicts, the Cross goes before us. So wrote Sabine Baring-Gould in the 19th-century hymn Onward, Christian Soldiers. The stirring music was composed by Sir Arthur Sullivan and soon became his most popular hymn. Its theme is taken from references in the New Testament to Christians being “soldiers for Christ”: “Labour as a good soldier of Jesus Christ.” (II Timothy 2:3)

This hymn never made it into any Catholic hymnal, and is rarely sung any more except in fundamentalist Protestant churches. The whole concept of the Church Militant, in which soldiers of Christ “stand up for Jesus” (another once-popular Protestant hymn) and His Church against the new barbarity of Islamic fascism and the secular humanist agenda — globalism, immigration, social-welfare programs and abortion — of the one-worlders and international elites, is being forgotten.

2500 years of Western civilization are at risk, but very few of us are willing to stand up and fight for what we believe. We are too politically correct to call out our enemies. We are weakened by the false ecumenism being promoted by those at the highest levels of Holy Mother Church, who tell us that we must avoid giving offence to the Muslims, for “we all worship the same God” — a damnable heresy.

One of the hierarchs who bids us keep quiet about our faith and not engage in the battle for civilization is Cardinal Reinhard Marx, head of the German Bishops’ Conference and one of those supporting the bishops’ call for the admission of non-Catholics to the Sacrament of Holy Communion “in cases of emergency”.

In April, Cardinal Marx rebuked Markus Söder, Premier of the German state of Bavaria, for ordering Christian crosses to be hung in all state buildings. The prelate accused Herr Söder of “expropriating the cross in the name of the state”, and said the decision would spark public “division, unrest and animosity.”

Not so, said the Premier! On Twitter, he wrote that the Cross was a “clear avowal of our Bavarian identity and Christian values.”

Herr Söder said the directive, set to take effect on June 1st, did not break constitutional rules because the cross was a symbol of the state’s identity rather than religion. Bavaria is one of the most Catholic regions of Germany. In 2016, more than 50% of the population identified as Roman Catholic.

Beatrix von Storch, a leader of the populist Alternative für Deutschland (AfD) party, weighed in on the side of the government, saying in a Tweet that she is more worried about “Christianity surrendering” with Cardinal Marx at the helm. “He lays down the cross at Temple Mount, and he doesn’t want it in public buildings either,” she wrote, saying that this capitulation is why “Islamization has space to unfold.”

I say, “Herzliche Glückwünsche!” to Herr Söder, Frau von Storch, and all Christian politicians who have the courage to hold high the Cross! God bless them, and send us more politicians who will stand up for the Faith of our fathers!

This article was updated on July 23, 2018 to make clear that Constantine the Great, although regarded as a saint by Orthodox believers, is not recognized as such by the Roman Catholic Church.