O God, our refuge and our strength, look down with favor upon Thy people who cry to Thee; and through the intercession of the glorious and immaculate Virgin Mary, Mother of God, of blessed Joseph, her spouse, of Thy blessed Apostles Peter and Paul, and of all the saints, do Thou mercifully and graciously hear the prayers which we pour forth for the conversion of sinners and for the freedom and exaltation of Holy Mother Church. Through the same Christ Our Lord. R. Amen

Anyone who has assisted at a Tridentine Low Mass will be familiar with the Leonine prayers which are said immediately after the Last Gospel and the conclusion of Mass. The Leonine Prayers are so named as they were mandated by Pope Leo XIII in 1884.

Previously in 1859, Pope Pius IX ordered that all Masses offered in the Papal States were to be concluded with three Hail Marys, the Hail Holy Queen, and a Collect for the temporal sovereignty of the Church. But it was not until January 6, 1884, that Pope Leo XIII ordered the prayers to be recited throughout the world after the anti-clerical Kingdom of Italy was created, which absorbed the sovereignty of the Papal States. Two years later, in 1886, he added to them the St. Michael the Archangel prayer, after the extraordinary vision God permitted him to see. The Leonine Prayers were modified by Pope St. Pius X, who inserted at the end of these series of prayers the three-fold recitation of “Most Sacred Heart of Jesus, have mercy on us.”

In 1929, when Vatican City was officially established as a sovereign state in a treaty with the Kingdom of Italy, the purpose of the Leonine Prayers was seen by some as being fulfilled. However, others would hold that the real intent of Leo XIII was for the full temporal sovereignty of the Pope over the territory known as the Papal States to be restored. To date, this has yet to happen. This land was donated in perpetuity by Pepin, King of the Franks in 756 A.D. for the protection and furtherance of the Catholic Faith. The Vatican City State (~0.5 sq. km.) is less than 0.003% of the land of the Papal States (41,400 sq. km). Relinquishing this land thus destroyed a centuries old nation state. In fact, it can be argued that it was the oldest country in the world at the time, as others had undergone significant revolutions that altered their very nature (such as France or China). This Lateran Treaty event may be crucial in the Message of Fatima, as David Rodriguez explains in another article.

The following year, Pope Pius XI ordered that the Leonine Prayers were to continue to be said but were to be offered for the intention “to permit tranquility and freedom to profess the faith to be restored to the afflicted people of Russia.” And they continued to be prayed at the end of Low Mass until they were discontinued in March 1965, following the September 26, 1964 instruction Inter Oecumenici, which decreed: “The Leonine Prayers are suppressed”.

However, more than ever before, we see the need to restore these prayers and encourage the faithful to pray them every day – even from home. The Leonine Prayers are not strictly speaking part of the Mass. They occur immediately after Mass and may be said by anyone for the intention of the Consecration of Russia to the Immaculate Heart of Mary and for the restoration of the Catholic Faith in Russia and the end of the schism of the Orthodox. You may print out the Leonine prayers by downloading a PDF of them here. (Some priests we know even specifically pray for the consecration and/or the conversion of Russia at the conclusion of the Leonine prayers.)

The Consecration of Russia to the Immaculate Heart of Mary following the specifications explicitly asked by Our Lady has never been done. And we see the manifestly corrupt ways of Russia even in this day spreading. The only way to answer Heaven’s call is for the Consecration to be done exactly as requested. And while we cannot do that ourselves, we can nevertheless each and every day earnestly pray for this intention when we recite the Leonine Prayers.

Fr. Gommar A. DePauw, J.C.D, President of the Catholic Traditionalist Movement, wrote a letter to Paul VI on August 15, 1967, in which he derided the rampant modernism then engulfing the Church. In that letter, he said in part:

“Listen instead to the genuine Roman Catholic, the traditionalist ‘man and woman in the pew’ who want their Pope to act like a Pope; the same Catholic who continues to kneel when receiving his living God in Holy Communion; who still prays the Rosary to his Mother in Heaven; who still genuflects at the words ‘And the Word was made flesh by the Holy Ghost of the Virgin Mary: and was made man’; who still reads the Last Gospel of St. John in his or her worn-out missal; who still says the Leonine prayers after Mass for the conversion of Russia; who still abstains from meat on Fridays; who still goes to church on Sundays instead of Saturdays; in one word, the traditionalist Catholics who refuse to turn their backs on the Son of God for any son of man, despite the red or purple he proudly preens ….”

May we too continue to attend the Tridentine Mass, abstain from meat on Fridays, fast all weekdays of Lent, pray the Rosary, attend Mass each and every Sunday, and pray the Leonine prayers for the conversion of Russia. In short, these are the external practices that underscore Catholic life.

Editor’s Note: Father Nicholas Gruner would always conclude the Leonine prayers with “Immaculate Heart of Mary, pray for us.” He taught us that Pope Pius XII, following the example of his holy predecessor Pius X, chose to append this invocation to the Leonine Prayers. This is certainly a pious practice in harmony with the faith, and especially congruent with Our Lady’s Message at Fatima. We would encourage all to add this devout prayer.

You can see this in the booklet published by The Fatima Center shortly after Father’s death, Father Gruner’s Little Booklet of Prayers. 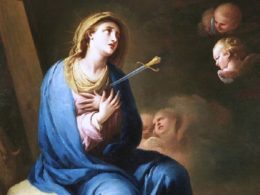 “And thine own soul a sword shall pierce, that, out of many hearts, thoughts may be revealed.” (Luke…
byThe Fatima Center
1 share
1
0
0
No comments 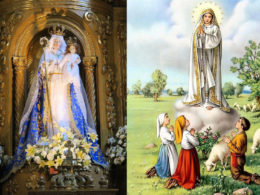 Fatima and Our Lady of Good Success: Part 1

Our Lady has appeared many times in the past, sometimes giving words of wisdom or prophecy, at other…
byKennedy Hall
No comments

Only the Corona Will Stop the Enslavement

The following paragraph and part of the second are taken from “Why World Enslavement or Not?”, an article…
byKennedy Hall
21 shares
21
0
0
No comments

The Third Temptation of Christ

“Once more, the devil took Him to the top of an exceedingly high mountain, from which he showed…
byEd Faust