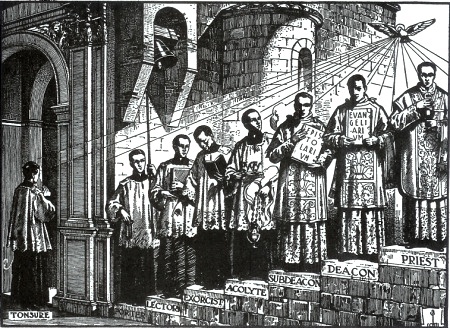 Who’s Who in the Church Militant

The Catholic Church – the Mystical Body of Christ – is made up of many types of members. It is composed of priests, nuns, men and women in religious orders, and lay people. Each person has a unique vocation from God. Even among life-long Catholics, some of these categories may be misunderstood or even unknown.

This three-part article is a brief overview to provide an understanding of what is a rather complex organization of various groups and persons who together make up the Body of Christ with their unique and differing qualities and charisms (cf. 1 Cor 12:4-11). Here is an overview of “who’s who” in the Church. Let us pray for all these groups.

The Church is composed of all the baptized souls on earth in addition to those in Heaven (the saints) and those in Purgatory (the Poor Souls). The focus on this article is on the various groups among those here on earth. But the souls in Heaven and in Purgatory remain part of the Church as well. Souls in hell are not part of the Church, even if they were baptized while on earth.

In rebutting the heresies of Calvin, St. Robert Bellarmine explained: “It is certainly true that a sincere faith and not its mere external profession is required if we are to be internally united to the Body of Christ, which is the Church… But even the man who makes only an outward profession along with the rest of the faithful is a true member, albeit a dry and dead member, of the Body of the Church.”[1]

Pope Pius XII further promulgated and clarified this teaching in his encyclical on the Church, Mystici Corporis (1943), in writing: “Actually only those are to be included as members of the Church who have been baptized and profess the true faith, and who have not been so unfortunate as to separate themselves from the unity of the Body, or been excluded by legitimate authority for grave faults committed.” [No. 22]

The laity are all the baptized Catholics who have neither received Holy Orders nor vowed to life in a religious order or congregation.

Those Who Have Received Holy Orders

There are two categories of Holy Orders: Minor Orders and Major Orders.

Traditionally, there are four Minor Orders that a man is ordained to before he is ordained a subdeacon, a deacon, and then a priest. These four orders – porter, lector, exorcist, and acolyte – date back to at least Pope St. Caius, who reigned in 283-296 AD! After the changes to the Minor Orders in 1972, the role of acolyte survived but became one of two lay ministries (along with that of lector) instead of being an order.[2] Today, Traditional Catholic orders such as the Institute of Christ the King Sovereign Priest, Society of St. Pius X, Priestly Fraternity of St. Peter, and others preserve the traditional orders, including the acolyte. The Minor Orders are received in the sequence shown here.

Porter (Doorkeeper): In the early Church, the porter was charged with care of the church building, ringing the church bells for Mass and the Divine Office, opening the church and the sacristy, holding the book in front of the preacher, and keeping troublesome persons out of the church. Spiritually, this symbolizes closing oneself to the devil and opening oneself to God by one’s words and examples, our souls being temples of the Holy Ghost. In giving this order, the bishop has the candidate touch the keys, saying: “Comport yourself as if you were to render account unto God, of all that you close with these keys.”

Lector: Those ordained as lector have the privilege to read the lessons and prophecies during the liturgy, which includes public recitation of the Divine Office. The bishop calls them to “Apply yourselves to reading the word of God in a clear and distinct manner to instruct and edify the faithful.”[3] Lectors may also bless first fruits and bread.

Exorcist: The bishop has the candidates touch the ritual book, containing the rite of exorcism. He instructs them, saying: “As you drive forth the devil from the bodies of your brothers, be sure to reject from your spirit and body all impurity and iniquity, so as not to be slaves of him from whom you deliver others.” However, today, Minor Order exorcists do not have the faculties to exorcise, that being left to priests designated by the local ordinary.

In every diocese, the bishop is the chief exorcist. He customarily delegates these powers, permitting trained and experienced priests to help him in the task of exorcising devils. Unfortunately, just as the Minor Order of exorcist has fallen by the wayside in the wake of modernism, so too has belief in the devil, in his power to possess and obsess humans, and in the devout – and ever more necessary – discipline of exorcising demons.

Nevertheless, every priest has the power to perform certain ‘basic’ exorcisms which are found in the Church’s common rubrics. For example, the traditional Roman Rite of Baptism for Infants has several exorcism prayers and the traditional Rite of Baptism for Adults has even more. Any priest ordained in the Roman Rite may perform these kinds of exorcisms. It truly is a powerful witness to hear a priest pray over a baby:

“I exorcise thee, unclean spirit, in the name of God the Father almighty ✠ and in the name of Jesus Christ His Son ✠ and in the power of the Holy Ghost ✠ that thou depart from this creature of God whom our Lord has vouchsafed to call to His holy temple, that he may become the temple of the living God, and the Holy Ghost may dwell in him. Through the same Christ our Lord, who shall come to judge the living and the dead, and the world by fire,”

Acolyte: The acolyte is the highest of the Minor Orders, having duties including the lighting of the altar-candles, carrying the candles in procession, assisting the subdeacon and deacon, and the ministering of water and wine to the priest at Mass. The bishop cites the Gospel according to St. Mark, saying: “Let your light shine before men that they may see your good works and glorify your Father that is in Heaven.” Acolytes wear either the alb or the surplice over a cassock.[4]

A common practice was for seminarians to receive each of these Minor Orders in four consecutive years. Cathedrals, where ordinations usually took place, were often built with seven special steps that represented each of the Minor and Major Orders. Each year the seminarian was then allowed to move one step higher as he received each successive order, always getting closer and closer to the Altar of God on which the Holy Sacrifice is offered.

With the suppression of the Minor Orders, all this beautiful and rich symbolism was lost. Yet even more importantly, vanished now is the interior impact it had upon the young man discerning in the seminary. Going up the steps, one year at a time, was a very natural way that Holy Mother Church encouraged her seminarian to persevere and build up the fortitude so necessary in a man who dedicates his life to standing as a sign of contradiction to the world, to a man whose very life is meant to be a sacrifice.

In the next portion of this article, we will briefly examine the Church’s three Major Orders.

[2] For those groups that follow post-Vatican II guidelines concerning Minor Orders, an acolyte has all the responsibilities of an altar server and a few additional ones. These novel norms further state than an acolyte is a permanent ‘extraordinary minister’ of Holy Communion and may be entrusted with celebrating Exposition of the Blessed Sacrament. He is also the only lay minister who has permission to purify the vessels at Mass. Furthermore, an acolyte is given a priority to lead blessing ceremonies (Book of Blessings, Introduction, n. 18). In the absence of both a priest and deacon, the acolyte has priority to lead Sunday Celebrations (Directions for Sunday Celebrations in the Absence of a Priest, 1988, n. 30). Of course, these are all modernist practices that regrettably undermine the ministerial priesthood. They are not in accord with Catholic Tradition. Nevertheless, understanding what ‘acolyte’ means today, as compared to what it has traditionally always meant, is important.

[3] This is not to be confused with the typical Novus Ordo Mass where the readings are given by a layperson who is called a lector. These are not ordained lectors. In fact, most people who serve as lectors at a Novus Ordo Mass are not ever given the ministry of lector, which normally requires some years of study and formation in the seminary.

[4] Altar Server: An altar server is a lay assistant to the priest during the Mass or to other members of the clergy in other religious functions, including Benediction and Eucharistic Adoration. An altar server is not to be confused with an acolyte, even though the two terms are at times incorrectly interchanged.