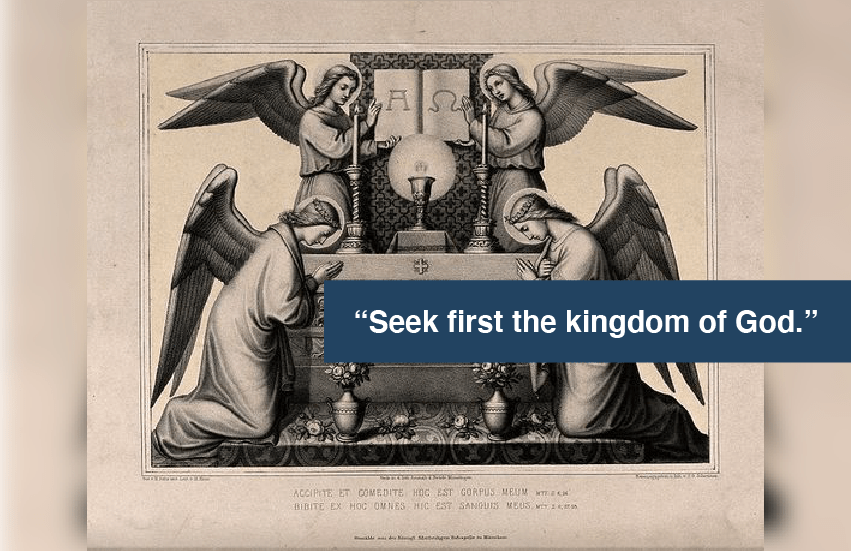 What Is the Eucharistic Fast?

The Authority of Scripture

St. Paul admonished those who approach Holy Communion with the purpose of merely eating food with condemnation: “For everyone taketh before his own supper to eat. And one indeed is hungry, and another is drunk. What, have you not houses to eat and to drink in? Or despise ye the church of God; and put them to shame that have not? What shall I say to you? Do I praise you? In this I praise you not” (1 Corinthians 11:21-22). [1] Likewise, in the Acts of the Apostles, St. Luke mentions those present at the sacred liturgy as also fasting: “And as they were ministering to the Lord, and fasting, the Holy Ghost said to them: Separate me Saul and Barnabas, for the work whereunto I have taken them” (Acts 13:2).

Fasting before receiving Our Lord in Holy Communion is of apostolic origin, although the specifics have changed over time. Hippolytus (c. 170 – 235 AD), in the Apostolic Tradition, writes, “The faithful shall be careful to partake of the Eucharist before eating anything else.” At the Synod of Hippo in 393, the Eucharistic Fast was codified in Canon 29, and again a few years later it was likewise codified at the Synod of Carthage in Canon 28.

St. Augustine bears witness to the universality of the fast before Holy Communion in his writings:

“Must we therefore censure the universal Church because the Sacrament is everywhere partaken of by persons fasting? Nay, verily, for from that time it pleased the Holy Ghost to appoint, for the honor of so great a Sacrament, that the Body of the Lord should take the precedence of all other food entering the mouth of a Christian; and it is for this reason that the custom referred to is universally observed.”[2]

Why Do We Observe the Eucharistic Fast?

What Is the Current Eucharistic Fast?[3]

The Eucharistic Fast immediately prior to Paul VI’s changes followed the mitigated discipline introduced by Pope Pius XII on January 6, 1953, in Christus Dominus[4], and on March 25, 1957, in Sacram Communionem. While legislating on a number of finer details, as a whole, Pope Pius XII’s legislation mitigated the fast to be for three hours before Holy Communion from all solid food and all alcoholic beverages. Nonalcoholic beverages were subject to a one hour fast, though water was permitted as stated in Christus Dominus: “In the future it shall be a general and common principle for all, both priests and faithful, that natural water does not break the Eucharistic fast.”

Note that Pope Pius XII encouraged those who could keep the older fast to continue to do so: “We strongly exhort priests and faithful who are able to do so to observe the old and venerable form of the Eucharistic fast before Mass and Holy Communion. All those who will make use of these concessions must compensate for the good received by becoming shining examples of a Christian life and principally with works of penance and charity.[5]”

People often cite and refer to papal legislation apart from its proper and complete context. In this case, it is extremely important to note the passage listed above as part of the context for the pope’s change in legislation. Basically, he is saying, if you can keep the traditional fast, you should. Hence, as dutiful children of the Church, we should each examine our conscience and ask, “Can I keep a longer fast? How great is my love for Jesus Christ? Can I make this small sacrifice out of love for Him Who died for me?” And if we opt to avail ourselves of the concession of the shorter three-hour fast, we should correspondingly increase our acts of penance and charity. How many of us consciously decide to adhere to the Pope Pius XII’s counsel?

What Was the Fast Prior to Pope Pius XII?

The traditional Eucharistic fast involved total abstinence from all food and all drinks, including water, from midnight until the reception of Holy Communion. Such a fast applied to priests as well as anyone approaching Holy Communion. This was enriched into Canon 858 of the 1917 Code:

“Those who have not kept the natural fast from midnight are not allowed to receive, except in danger of death, or in case it should become necessary to consume the Blessed Sacrament to safeguard it against irreverence.”

The Eucharistic Fast is set by the Church so that those who are to receive Our Lord in Holy Communion are more consciously aware of this sublime encounter. We need to fast beforehand to adequately prepare ourselves. To intentionally violate the Eucharistic fast is a mortal sin.

Done with the right intention, fasting from natural food increases our desire for supernatural nourishment. Fasting is also a most powerful means of strengthening our Faith and inflaming our love for Christ in the Blessed Sacrament. This Eucharistic fast is also a small but important way in which we can answer the call of “Penance, Penance, Penance!” made by Our Lady at Lourdes and at Fatima. What a privileged means of offering Our Lord reparation for the many offenses, sacrilegious, and indifferences He receives in the Blessed Sacrament.

Let us endeavor to observe in our own lives the strictness of the traditional discipline, in a time when so few do penance.

[1] Commenting on this passage, the Haydock Catholic Bible Commentary illustrates the meaning of these words: “In S. Chrysostom’s time, and from the first ages, every one received the sacrament of the holy Eucharist fasting, as it is probable this was one of the things which S. Paul gave orders about, when he came to Corinth. We must not imagine, that because Christ instituted the holy Sacrament, and gave it to His Apostles after He had supped with them, that the Apostles, or the pastors of the Church, their successors, could not order it to be received fasting, and kneeling, for greater reverence and devotion. See S. Aug. on this same subject… He says, that though it is evident the Apostles [at the Last Supper] did not receive the Body and Blood of Christ fasting, yet we must not on that account calumniate, or blame the universal Church, in which it is received only by those who are fasting. He says, it is most insolent madness to dispute against what is a custom in the universal Church.”

[2] St. Augustine’s writings on fasting in Letter 54 are available for viewing online at http://www.newadvent.org/fathers/1102054.htm

[3] Note this does not cover the topic of Viaticum. In such a case, Holy Communion may be received without having observed the Eucharistic Fast. Can 921 §2 also states, “Even if they have already received holy communion that same day, it is nevertheless strongly suggested that in danger of death they should communicate again.”