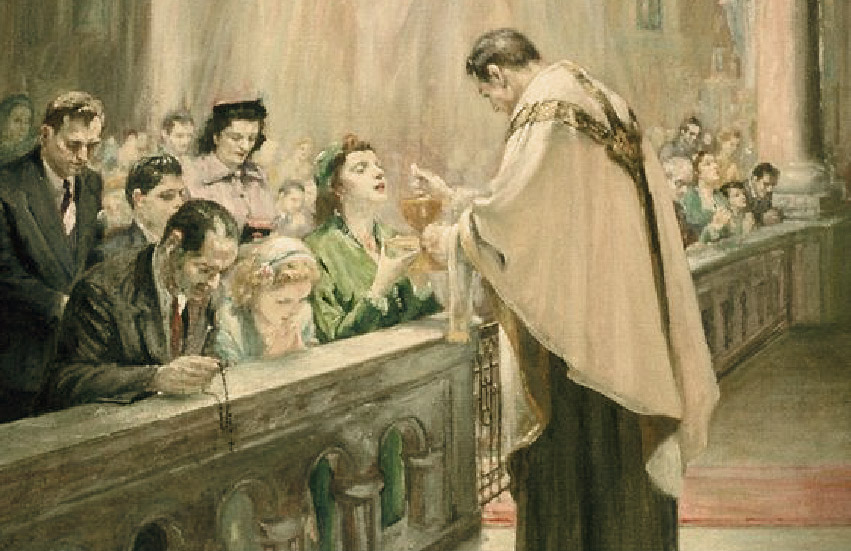 What Is Our Easter Duty?

(Read Miracles Are Proof of the Catholic Church’s Divine Origin)

Editor’s Note: The Fatima Center repeatedly emphasizes that a supernatural charity of God should motivate us to live our Faith and fulfill our duties. When it comes to love, one always asks, “What more can I do to show my love?” instead of “What is the minimum I have to do?” Love always challenges and exhorts us to greater heights (cf. 1 Cor 13).

A vibrant and regular sacramental life is indispensable for growing in grace, which is why Catholics are advised to go to Confession frequently (for example, once a week) and to receive Holy Communion frequently (always in the state of grace).

It is also important for Catholics to be properly catechized. This includes knowing the minimum requirements which Holy Mother Church has established for all of us. The purpose of this article is not to encourage Catholics to limit themselves to the minimum required by Church Law, but rather to ensure that all Catholics are familiar with the law, its origin, sources, and reasons.

What Is Meant by Our Easter Duty?

Fr. Jim Achacoso, in an online article entitled “The Easter Eucharistic Precept and the Law of Annual Confession,” discusses the importance and history of this precept:

“Due to a widespread neglect of the sacrament of the Eucharist in the Middle Ages, various Church Councils, from the 6th Century onward, enacted laws obliging the faithful to receive the Holy Eucharist, especially on the principal feasts. The IV Lateran Council (1215) established a general law for the Latin Church requiring the reception of Communion at least once a year at Easter by those who had attained the age of discretion. This law, which was confirmed by the Council of Trent, was incorporated in the 1917 Code of Canon Law. The actual Code of 1983 retains the annual precept, with some modifications…”

To further explain the history, the Catholic Encyclopedia on the New Advent website states:

“Paschaltide is the period during which every member of the faithful who has attained the year of discretion is bound by the positive law of the Church to receive Holy Communion (Easter duty). During the early Middle Ages from the time of the Synod of Agde (508), it was customary to receive Holy Communion at least three times a year — Christmas, Easter, and Pentecost. A positive precept was issued by the Fourth Lateran Council (1215) and confirmed by the Council of Trent (Sess. XIII, can. ix). According to these decrees the faithful of either sex, after coming to the age of discretion, must receive at least at Easter the Sacrament of the Eucharist (unless by the advice of the parish priest they abstain for a while). Otherwise during life they are to be prevented from entering the church and when dead are to be denied Christian burial. The paschal precept is to be fulfilled in one’s parish church. Although the precept of the Fourth Lateran to confess to the parish priest fell into disuse and permission was given to confess anywhere, the precept of receiving Easter Communion in the parish church is still in force where there are canonically-erected parishes…”[3]

When May the Easter Duty Be Fulfilled?

The Rituale Romanum in place in 1962 states:

“The time within which the Easter communion must be received commences on Palm Sunday and terminates on Low Sunday. But it is the right of the local Ordinary, if circumstances of persons or place demand, to extend this time for all the faithful, however, not earlier than the fourth Sunday in Lent nor later than Trinity Sunday. The faithful should be persuaded to fulfill this obligation, everyone in his own parish church. Whoever fulfills it in another church must see to it that he inform his own pastor of the fact. The precept of Easter communion still continues to be binding if one has neglected it during the time prescribed, no matter for what reason.”

“In the United States, upon petition of the Fathers of the First Provincial Council of Baltimore, Paschal Tide was extended by Pius VIII to the period from the first Sunday in Lent to Trinity Sunday (II Plen. Coun. Balt., n. 257); in England it lasts from Ash Wednesday until Low Sunday; in Ireland from Ash Wednesday until the octave of SS. Peter and Paul, 6 July (O’Kane, ‘Rubrics of the Roman Ritual’, n. 737; Slater, ‘Moral Theology’, 578, 599); in Canada the duration of the Paschal Tide is the same as in the United States.”

These are the exceptions from the standard time of Palm Sunday through Low Sunday mentioned in the Rituale Romanum. This is also affirmed in the Baltimore Catechism, #1354: “The Easter time is, in this country [the United States], the time between the first Sunday in Lent and Trinity Sunday.”

Pope St. Pius X is often referred to as the “Pope of Holy Communion” or by other similar epithets. He adjusted the Church’s law so that once one has attained the age of reason one may receive Holy Communion. It used to be commonplace that one would not receive their First Communion until around fourteen years of age, but now it is quite standard for seven-year-olds to receive.[4] This saintly Holy Father also never tired of encouraging the frequent and devoted reception of Holy Communion.

It must also be stated that, like the precept of assisting at Mass each Sunday, the annual Holy Communion and Confession during the Easter Season can be dispensed by one’s local ordinary for serious reason. We are seeing some dispensations occur this year due to the COVID-19 crisis. However, what most news articles are stating incorrectly is that the Easter Duty does not require receiving Holy Communion on Easter Sunday. As demonstrated, it is fulfilled over a much larger time — including all of Lent in most countries. For that reason, many faithful Catholics would have already fulfilled this precept of the Church before the COVID-19 crisis led to widespread church closures.

[1] 1983 Code of Canon Law: Can. 920 §1. After being initiated into the Most Holy Eucharist, each of the faithful is obliged to receive holy communion at least once a year. §2. This precept must be fulfilled during the Easter season unless it is fulfilled for a just cause at another time during the year.

1917 Code of Canon Law: The precept for annual reception of First Holy Communion is contained in Code 859. Every Catholic, of either sex, who has reached the age of discretion, i.e., attained the use of reason, must receive Holy Eucharist once a year, at least during Easter time, unless his own priest should, for a reasonable cause, advise him to abstain from it for a time.

[2] Since Catholics may never receive Holy Communion in the state of mortal sin, it is often advised to make a good confession shortly prior to receiving Holy Communion. For this reason, many parishes established the practice of making confession available on Saturday afternoon (not long before Sunday Mass) and of making confession regularly available an hour or thirty minutes before the start of Holy Mass. If a Catholic were to only receive Holy Communion once in the entire year, it would certainly be highly advisable that they make a good confession shortly before then, even though this is not explicitly stated in the Six Precepts of the Church.

[4] Those who wish to learn more about this subject matter are encouraged to read Quam Singulari (1910), which is Pope St. Pius X’s Decree of the Sacred Congregation of the Discipline of the Sacraments on First Communion.