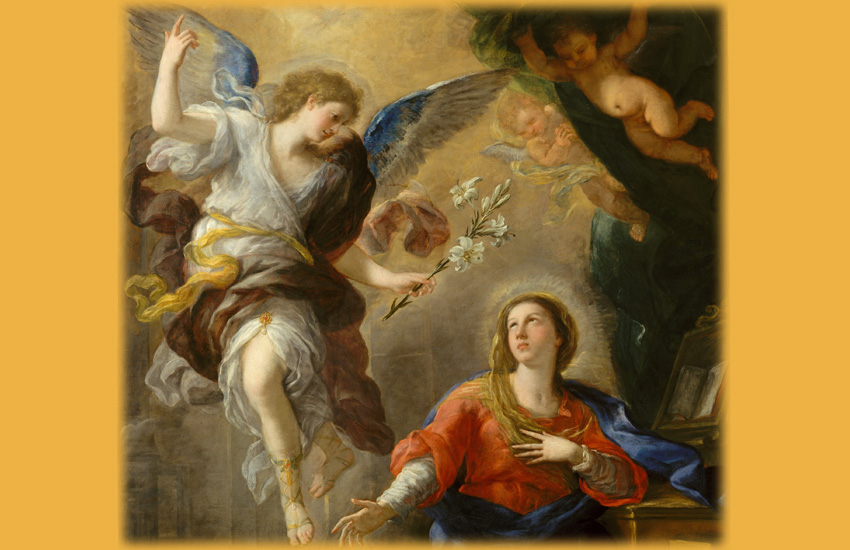 The Fatima Center wishes you a grace-filled Feast of the Annunciation!

Today, Holy Mother Church commemorates one of the most important events in the history of mankind’s salvation. She calls all her children to meditate upon the Mystery of the Incarnation, when “the Word was made flesh” (Jn 1:14). With unceasing voice, we praise and thank God for this ‘Grace of graces.’

In an upcoming article, we shall invite you, dear reader, to contemplate the indispensible role of Our Blessed Mother in our salvation, with particular application to our situation today. Yet today, let us consider the singular role played by this date in God’s Divine Providence governing salvation history.

There is a long standing tradition in the Church that March 25th is, in many ways, the most special day of the calendar. Most Catholics know today marks the Feast of the Annunciation when the Incarnation took place; it certainly ranks among the great solemnities, such as Christmas, Easter and Pentecost. However, did you know the following about March 25th?

(1) Creation – According to ancient sources, March 25th is a day of creation. Contrary to the false science and errors of evolution, Scripture and Tradition teach that God created instantaneously (simply by speaking) and out of nothing. These ancient traditions relate that March 25th was the day on which Adam and Eve were created and therefore also the day on which Adam and Eve committed the Original Sin.

(2) Incarnation – It was on this same calendar day that Jesus Christ assumed our human nature. March 25th is the day of the Mysteries of the Annunciation and Incarnation. On this day, God sent the archangel Gabriel to the Virgin Mary and She gave Her fiat. As we well know, Christ was then born nine months later, on Dec 25th.

(3) Crucifixion – We read in the Roman Martyrology that March 25th is also the day on which St. Dismas, the good thief, died. This corroborates the ancient and venerable tradition that Our Lord was crucified on March 25th. In other words, the calendar date of the original Good Friday was March 25th.[1]

St. Irenaeus explains that it is eminently fitting that on the same day in which the fallen angel seduced the virgin Eve, so on that day the archangel Gabriel spoke the words of salvation for all mankind to the Virgin Mary. He adds that on the same day that mankind was lost on account of the fruit of the forbidden tree, so on that day Christ hangs on the tree of the Cross and wins salvation for mankind.[2]

We have writings from a number of other Fathers and Doctors of the Church who convey this tradition, including St. Augustine, St. Clement of Alexandria, St. Cyprian, and St. Maximus the Confessor.

(4) Other Notable Events. Traditions that come to us from antiquity also claim that many other key events in salvation history occurred on March 25th. For example: Cain slaying Abel, Melchisedech offering bread and wine in the presence of Abraham, Abraham’s offering of Isaac, and the Crossing of the Red Sea. If this subject interests you, The Lepanto Institute has an article that goes into more detail and it can be read HERE.

Let us consider the providence of God behind these remarkable events, especially today when there is so much concern over a supposed Coronavirus pandemic, which has claimed less than 20,000 deaths or 0.00025% of the world’s population,[3] and the increasing severe restrictions placed upon our daily lives, under which we are all suffering.

It is in such times of trial that our faith is tested. Let us respond by cooperating as much as we possibly can with God’s grace – to truly make this a singular Lent and spiritually fruitful Passiontide.

Our Lady of the Annunciation, pray for us.

[1] I am aware that there are various arguments out there which claim a different date for when Our Lord died, such as April 3rd. Various scholars have also suggested that Our Lord died in this or that year (ranging anywhere from around 29 AD to 35 AD). I, however, prefer to follow the ancient traditions and opinions of Fathers, Doctors, and Saints, as opposed to more modern scholars, historians, archaeologists or theologians. This is certainly not a matter of faith (de fide) on which the Church has provided a solemn definition; hence, faithful Catholics are free to believe one opinion over another. I simply find that this pious opinion is the most fruitful for spiritual meditation, for contemplating the Divine Providence of God and His perfect and almighty mastery over all human history.

[2] St. Irenaeus is the most prolific writer among the early Church Fathers. He was the spiritual son of St. Polycarp, who in turn was ordained and taught by St. John the Apostle. St. Irenaeus emigrated from the East to Lyon (France), advised several popes, was consecrated a bishop, fought against numerous heresies, and was ultimately martyred for the Faith. The popes of his day considered him a most reliable source for Apostolic Tradition and on that basis accepted his counsel on several important matters related to heresy and schism. Thus, in the writings of St. Irenaeus, we have a very important and trustworthy witness; and we are in direct contact with the traditions taught by the Apostles themselves. (In fact, St. Irenaeus writes that it is an apostolic tradition that Our Lord was conceived on March 25th.) Those interested can read a bit more about this from Dom Guéranger’s The Liturgical Year for March 25, linked here.