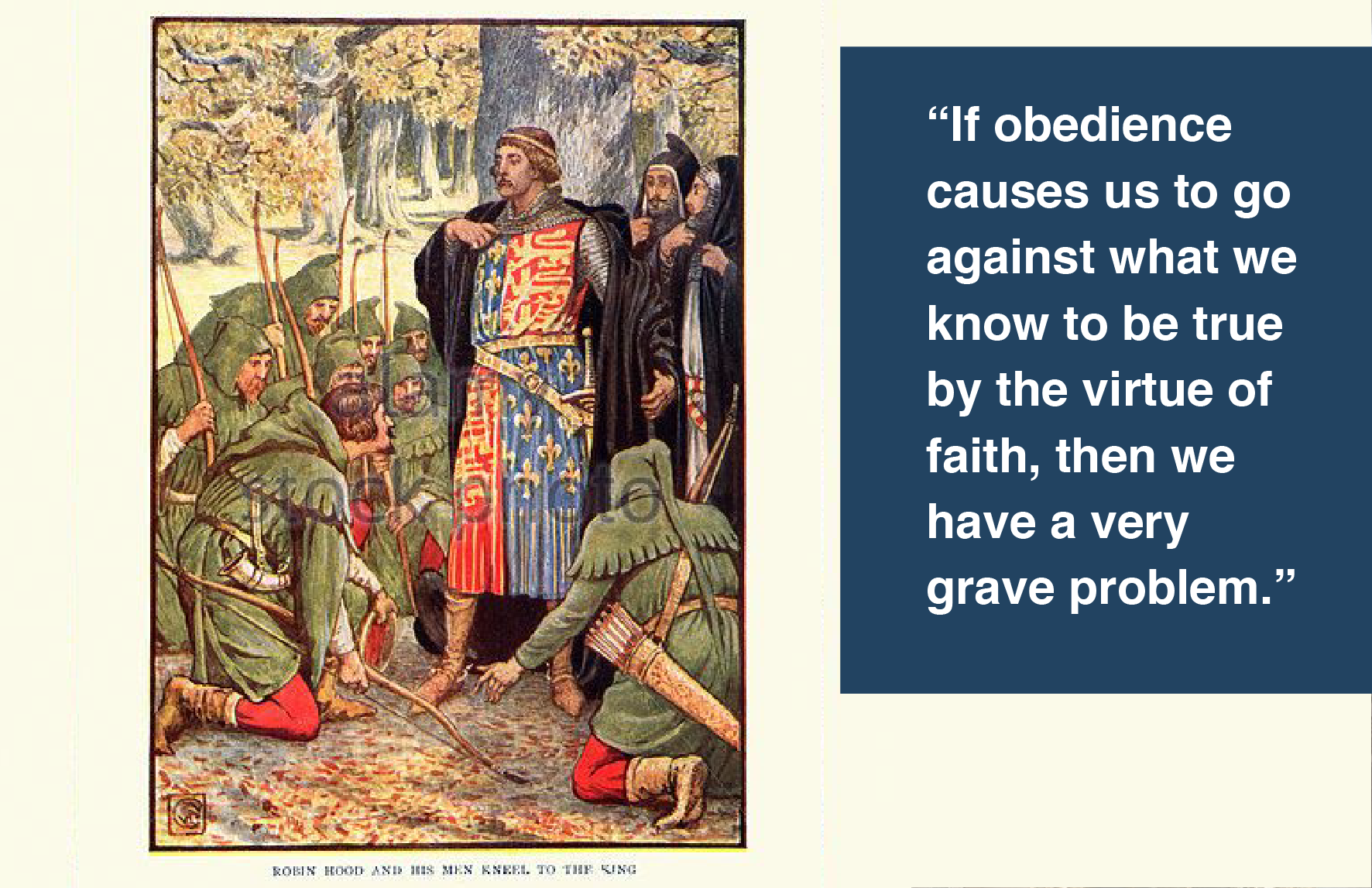 (Read the previous post in this series: The Nature of True Obedience)

An Unjust Law Is No Law At All

In the first part of this article, we learned that the virtue of obedience is grouped as one of the virtues which falls under the cardinal virtue of justice. In fact, St. Thomas quoting St. Augustine famously stated, lex injusta non est lex (an unjust law is no law at all).

We also explained how there are some situations in which one is not obligated to obey his superior. This, of course, includes unjust laws which do not carry the moral force of true law. Furthermore, there are some situations in which one is obligated not to obey a superior. The most obvious case is when the superior commands something sinful. No one may ever justly command another person to disobey God. And one may never justify his sin before God by claiming ‘I was just being obedient.’

We all recognize this truth in the following simple example. If a father commanded his son to help him steal cars and murder innocent people, the son would actually have to refuse. While he may appear disobedient to his father, the son is actually exercising the true virtue of obedience because he is obeying God and faithfully following the Natural Law. The father might rant and rave, might accuse the son of disobedience, and might even punish him, but the truly obedient son would endure this unjust persecution for the sake of truth, goodness and His love of God.

What Is True Obedience?

This does not mean that we seek “disobedience” as an end, but rather that we must be careful as to the true end of our obedience, while employing the necessary virtues in their correct measure. In addition, the natural virtues must be enlightened by the supernatural virtues of Faith, Hope, and Charity. None of the cardinal, or natural, virtues are ever being employed correctly if they lead one to go against supernatural faith, hope or charity.

If obedience causes us to go against what we know to be true by the virtue of faith, then we have a very grave problem.

Supernatural Faith, obedience to God, must always come before obedience to any man, even a priestly representative of God. St. Peter, inspired by the Holy Ghost, teaches, “We ought to obey God rather than men” (Acts 5:29). He told this to the religious authorities of his day and he also lived this principle out with respect to the secular authorities of his day. Granted, he and the Apostles suffered greatly for this truth, but they rejoiced “that they were accounted worthy to suffer reproach for the name of Jesus” (Acts 5:41).

Now, situations that may require obedience to a higher authority and go against the commands of a lower superior should be, and frankly are, rare. Our first instinct should be to seek a way to obey while also fulfilling our duties. And for certain people, like religious who make a special vow of obedience, accepting an unjust command may even help to merit great graces through the carrying of an undeserved Cross.

However, for those of us entrusted with the care of others as a primary duty, either natural or spiritual children, we owe as a matter of justice what is necessary for the physical and spiritual wellbeing of our dependents. For example, a father of children may have to seek ways around an unjust law or command from an authority, if this command impedes his duty to feed his children. Analogously, a pastor of souls is bound by true obedience to God and the welfare of souls to confer sanctifying grace to his flock, even if unjustly told not to do so by his bishop. This must be done even at the risk of the priest himself becoming sick or dying. We must not seek to calumniate or detract our prelates, but we are not “disobedient” if we voice our well-formed opinion based upon the truths of the Faith and request that which Holy Mother Church herself teaches is our right, i.e. the ordinary means of sanctifying grace.

The Kingly Obedience of Robin Hood

We are all familiar with the Legend of Robin Hood. There are many versions, and unfortunately Hollywood and Disney have done their best to ruin a good story from the Christian Era. Now, there are at least two ways to interpret the epic tale: one is to see it as a tale of “the ends justifying the means” as Robin Hood breaks the law, even if for a good purpose, while the other is to view Robin Hood as a Chivalric hero who obeys the true King Richard the Lionheart instead of the usurping King John. Of course, this is not a matter of faith and morals, therefore reasonable minds can differ. Nonetheless, it is an exciting story to contemplate, as we perhaps find ourselves in an analogous situation.[1]

Without pointing to any specific authority figure, we are living through an age wherein our true Christian Kingdom has been unjustly usurped. Those charged with our care are often far too willing to exploit the loyalty and poverty of spirit of their subjects. We find ourselves in an epic moment in Christian history, and we have to ask ourselves a question: Are we willing to take up true obedience and serve the rightful King in absentia? What if it means forging a colony of loyalty to His Majesty in the wilderness?

The King Shall Return

This is a daunting concept, and I do not pretend to have a blueprint. But, I do know that we are in unique times, and that things will never go back to “normal.” We assume our churches will reopen in some capacity, and our day to day lives will resemble what they did before. Nevertheless, we will always remember what many shepherds did when we needed them the most. We now clearly see that for many in high Church offices, the True Kingship of Jesus Christ is, at best, an afterthought.

Let us use this time as a moment of spiritual and moral training for the Return of The King. As we venture further into the dark forest of abandonment, let us sharpen our swords, and refine our marksmanship in preparation for what is the battle of our lifetime: the Battle for the Church. And, in all things employ “the shield of faith, wherewith you may be able to extinguish all the fiery darts of the most wicked one.” Eph 6:16

Read the next article in this series: Religious Freedom (Part IX)

[1] It is certainly a clear moral teaching of the Church that the ends do not justify the means. Thus, stealing is wrong and can never be promoted as just. If one views Robin Hood as a stealing thief, then his actions are wrong no matter his good intent. However, if Robin Hood only returned belongings to their rightful owners, then it may be incorrect to consider him a thief. Say, for example, your car is stolen. A day later you come upon your car in a parking lot; you can certainly use your key to drive your car home and no moral law would call you a thief. The historical question as to what Robin Hood actually did remains shrouded. Yet the issue primarily being considered in this essay is: Should Robin Hood obey the unjust laws of the usurping ‘king’ John or the rightful though absent King Richard?