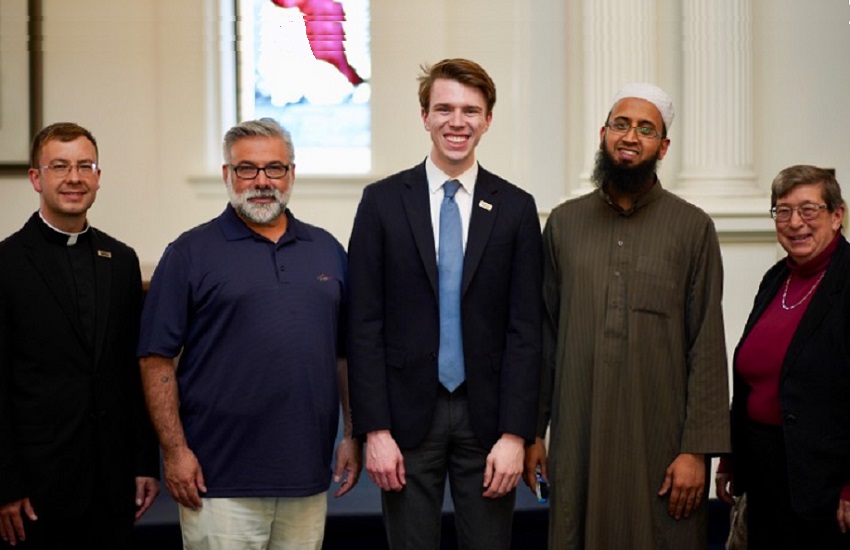 The false ecumenism which is one of the poisoned fruits of Vatican II grows like a cancer in the mainstream Catholic Church. In the USA especially, well-intentioned Catholics have drunk the Kool-Aid of “inclusion” and “accommodation”. If non-Catholics don’t like the way we do things in our churches and schools, well, we can change!

Case in point: St. Ambrose University in Davenport, Iowa, which recently inaugurated a new prayer space for Muslim students, complete with sinks for ritual foot-washing and separate areas for male and female worshippers. Bad enough the “Catholic” university should be admitting non-Catholic students, but to be welcoming Muslims, followers of the “religion of peace” which encourages the killing of “infidels” — that would include us Christians — really takes the cake. To bend over backwards to accommodate them… It’s just too much!

The “interfaith prayer space” — it’s OK for non-Muslims to use it too — was proposed last fall by senior Student Government Association President Matthew Mahoney in consultation with the Saudi Student Association. (Yes, you read that right.) Mr. Mahoney said the Muslim student leaders were pleased when he proposed naming the space after Father Joe DeFrancisco, who taught “World Religions Theology” [sic] at the “Catholic” university.

According to the university’s web page, the prayer room was named in Fr. DeFrancisco’s honour as an acknowledgment of his efforts to promote “the universality of faiths” throughout his career at St. Ambrose. “Universality of faiths” was “progressive” or New Age code for relativism, which is effectively the same as atheism — a terrible heresy. The relativists claim there are no objective truths about God or the soul or morality. Therefore you can decide for yourself what you want to believe and how to practice your faith. It’s all relative to you.

You’ve heard it said that “We all worship the same God.”? Relativism claims to accept all religions and beliefs. But in reality it’s inherently atheistic. Consider this: If God exists, then your religion is extremely important. If there is a real God, then worshipping a false god — a violation of the very first Commandment — could send you straight to Hell.

But if God doesn’t exist, then religion doesn’t matter. It becomes no more important than the colour you choose to wear when you get dressed. It could be red, green or blue. It doesn’t matter.

So also, if there is no God, and therefore no objective truth, then religion becomes irrelevant. To say all religions are equal (or “universal”) doesn’t make sense unless they are all equally false.

To say that all moral beliefs and religions are acceptable is to say that ultimately it doesn’t matter. This implies that God doesn’t exist, for if He did exist then clearly those things would matter. That is why relativism is inherently atheistic.

Getting back to St. Ambrose U., the dedication of the “interfaith prayer space” featured Sister Joan Lescinski, CSJ, PhD, president of St. Ambrose; Imam Saad Baig, director of religious affairs at the Islamic Center of the Quad Cities; members of Father DeFrancisco’s family; and Rev. Thomas Hennen, SAU’s chaplain. Sr. Lescinski thought it was a wonderful way to honour “Father Joe”, whose former students (she said) “still talk about the impact visits to temples and mosques had on them as members of his Comparative Religions class.”

SGA President Mahoney (whose brainchild this was) gushed, “Being able to say that we’re committed to these Muslim students, and to all students — students of all different faiths — is really outstanding. It’s uniquely Ambrosian, and it just sort of shows our commitment to all different faiths.”

Mr. Mahoney’s effusive praise did not sit well with all Catholic observers, however. Some even thought the move towards “inclusion” (read: relativism) waters down the college’s Catholic identity and mission. Writing for the Daily Wire, Paul Bois said that “it seems counter to a Catholic school’s mission statement to provide sex-segregated ‘safe spaces’ for Muslim students to conduct prayer.”