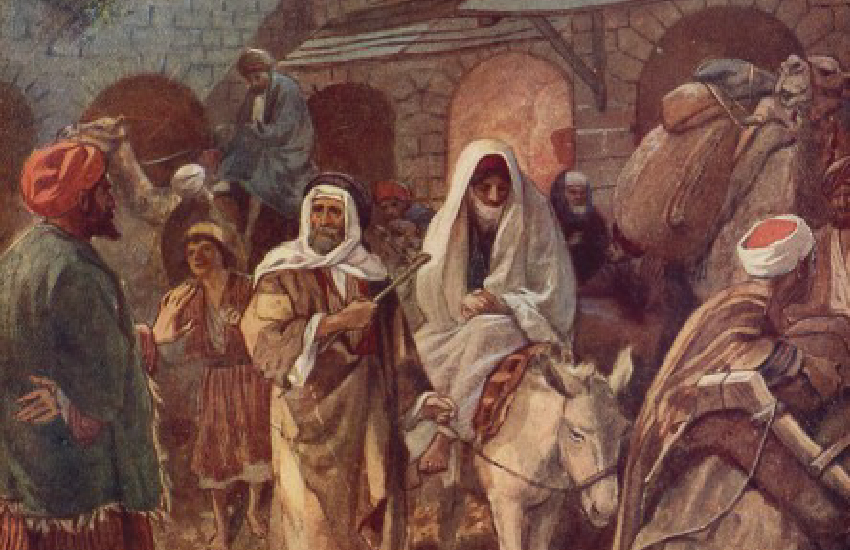 In a previous article we described Martinmas, the True Catholic Thanksgiving. Now we look at the St. Martin’s Lent, the True Advent Fast.

The History of the Advent Fast

The Catechism of the Liturgy describes the fast leading up to Christmas: “In a passage of St. Gregory of Tours’ History of the Franks we find that St. Perpetuus, one of his predecessors in the See, had decreed in 480 AD that the faithful should fast three times a week from the feast of St. Martin (November 11th) [up] to Christmas… This period was called St. Martin’s Lent and his feast was kept with the same kind of rejoicing as Carnival.” In historical records, Advent was originally called Quadragesimal Sancti Martini (Forty Days Fast of St. Martin). The Catechism of the Liturgy notes that this observance of fasting in some form likely lasted until the 12th century.

Turning to The Catechism of Perseverance by Monsignor Gaume from 1882, we read the following historical account of the Advent fast taking the form of a fast on the Mondays, Wednesdays, and Fridays from St. Martin’s Day until Christmas:

“The institution of Advent would seem as old as that of the festival of Christmas, though the discipline of the Church on this point has not been always the same. For several centuries, Advent consisted of forty days, like Lent: it began on St. Martin’s Day. Faithful to the old customs, the Church of Milan kept the six weeks of the primitive Advent, which had been adopted by the Church of Spain. At an early period the Church of Rome reduced the time to four weeks, that is, to four Sundays, with the part of the week remaining before Christmas. All the West followed this example.

“Formerly, a fast was observed throughout Advent. In some countries this fast was of precept for every one; in others, of simple devotion. The obligation of fasting is attributed to St. Gregory the Great, who had not, however, the intention of making it a general law. In the middle of the fifth century – 462 – St. Perpetuus, Bishop of Tours, commanded that there should be three fast days weekly in his diocese from the festival of St. Martin to Christmas. This rule became general in the Church of France til the seventh century, after the holding of the Council of Macon in 581. The holy assembly prescribed that a fast should be observed on the Monday, Wednesday, and Friday of each week, from the feria or festival of St. Martin to the Nativity of our Lord; and that the offices, especially the sacrifice of the Mass, should then be celebrated as in Lent. The use of flesh-meat was forbidden every day during Advent.

“The same abstinence was observed in other Catholic regions as a pious donation proves for us. In 753, Astolphus, King of the Lombards, having granted the waters of Nonantula to an abbey of the same name, reserved forty pike to furnish his own table during St. Martin’s Lent. We may infer that, in the eighth century, the Lombards observed the fast during the forty days before Christmas, or at least abstained from flesh meat.”

By the 1100s, the fast had begun to be replaced by simple abstinence. As stated in A History of the Commandments of the Church by Rev. Antoine Villien:

“Thus even before reaching full vogue, the Advent fast was on the decline. At the end of the twelfth century it was nearly abolished. The Council of Avranches AD 1172 made not only fasting but even abstinence in Advent a matter of simple counsel especially addressed to clerics and soldiers. In Rome, the observance still existed but in Portugal, it was not known whether it carried with it any obligation for the Archbishop of Braga questioned Pope Innocent III on this point and the Pope, instead of insisting that there is an obligation, simply states that in Rome the fast is observed. No very clear information is to be obtained from Durand de Mende if an Advent fast existed at his time. Durand does not speak of the way it was observed. In England, it was obligatory only for monks like the daily fast imposed by the Council of Tours for the month of December up to Christmas.”

As indicated, in 1281, the Council of Salisbury held that only monks were expected to keep the fast; however, in a revival of the older practice, in 1362 Pope Urban V required abstinence for all members of the papal court during Advent. Yet, this too did not last long. By the time of St. Charles Borromeo in the 16th century, the saint urged the faithful under his charge in Milan to observe fasting and abstinence on Mondays, Wednesdays, and Fridays of Advent. Dom Gueranger similarly testifies to this in The Liturgical Year:

“The discipline of the Churches of the west, after having reduced the time of the Advent fast so far, relented in a few years as to change the fast into a simple abstinence and we even find Councils of the twelfth century, for instance Selingstadt in 1122 and Avranches in 1172, which seem to require only the clergy to observe this abstinence. The Council of Salisbury held in 1281 would seem to expect none but monks to keep it. On the other hand, for the whole subject is very confused owing no doubt to there never having been any uniformity of discipline regarding it in the western Church, we find Pope Innocent III in his letter to the bishop of Braga mentioning the custom of fasting during the whole of Advent as being at that time observed in Rome, and Durandus in the same thirteenth century in his Rational on the Divine Offices tells us that in France fasting was uninterruptedly observed during the whole of that holy time.

“This much is certain, that by degrees the custom of fasting so far fell into disuse that when in 1362 Pope Urban V endeavored to prevent the total decay of the Advent penance all he insisted upon was that all the clerics of his court should keep abstinence during Advent without in any way including others, either clergy or laity, in this law.

“St. Charles Borromeo also strove to bring back his people of Milan to the spirit if not to the letter of ancient times. In his fourth Council, he enjoins the parish priests to exhort the faithful to go to Communion on the Sundays at least of Lent and Advent and afterwards addressed to the faithful themselves a pastoral letter in which, after having reminded them of the dispositions wherewith they ought to spend this holy time, he strongly urges them to fast on the Mondays, Wednesdays, and Fridays at least of each week in Advent.”

Even closer to our modern times, remnants of St. Martin’s Lent remained in the Roman Rite through the 19th century, when Wednesday and Friday fasting in Advent continued to be mandated in some countries.

In the United States, fasting was kept on the Wednesdays and Fridays of Advent, as was the universal practice of the Church, until 1840 when the fast on Wednesdays in Advent was abrogated for Americans. The fast on Fridays in Advent was then abrogated in 1917 in America and abroad with the promulgation of the 1917 Code of Canon Law. The Code similarly removed the Wednesdays of Advent for any localities that continued to mandate them, as well as the Saturdays of Advent which were kept elsewhere, such as in Italy.

But even the attempts to maintain elements of the Advent fast from the 17th through the 20th centuries were shadows of St. Martin’s Lent. In fact, the Church still encouraged people to keep the venerable discipline of St. Martin’s Lent, even if it was not obligatory under pain of sin. This fact is expressed with conviction in the Catechism of Perseverance:

“The Church neglects no means of revisiting in her children the fervour of their ancestors. Is it not just? Is the little Babe whom we expect less beautiful, less holy, less worthy of our love now than formerly? Has He ceased to be the Friend of pure hearts? Is His coming into our souls less needed? Alas! perhaps we have raised there all the idols that, eighteen centuries ago, He came to overturn. Let us therefore be more wise. Let us enter into the views of the Church: let us consider how this tender mother redoubles her solicitude to form in us those dispositions of penance and charity which are necessary for a proper reception of the Babe of Bethlehem.”

Are these words not more applicable today than when they were written?

The West Has Forgotten Its Advent Fast

The Advent fast, long observed in anticipation of Our Lord’s birth, had ceased, although the fast of the Advent Ember Days, the Vigil of the Immaculate Conception, and Christmas Eve remained. Yet by the time of Vatican II, even these venerable fasts were also removed.

Despite being one of holiest days in the year, Christmas had ceased to be prepared for with a fast of any kind. And soon after, the secular world insisting on materialism turned Advent into Christmastide. Christmas parties, gift exchanges, and consumer splurging have all taken place during the time that our forefathers were diligently preparing for the Redeemer’s birth by observing a fast. How far we have fallen from the times of St. Martin!

Above all, as we approach Advent this year and await the celebration of the Nativity of Christ, let us embrace some fasting. Fasting on Wednesdays and Fridays during this time is preferable to not fasting at all. But this mitigated fast is only a remnant of the true Advent fast.

Strive to keep at least Mondays, Wednesdays, and Fridays from St. Martin’s Day as days of fast. Should you wish to do more, keep all forty days as days of fast. Indeed, as St. Frances de Sales noted: “If you’re able to fast, you will do well to observe some days beyond what are ordered by the Church.” Tuesdays, Thursdays, and Saturdays would be appropriate to observe as days of abstinence without fast. Saturdays are separately an appropriate day to fast in honor of our Lady.

As a result, I suggest the following schedule for St. Martin’s Lent, based on the Church’s venerable tradition:[1]

As we celebrate St. Martin’s Day on November 11, let us prepare for forty days of fasting, penance, and prayer in preparation for Our Lord’s Nativity. And when Christmas comes, let us celebrate it joyfully and festively until February 2. While the world celebrates too early and ceases celebrating on the 2nd day of Christmas, let us not make that same grave mistake. And before any feast, there should be an appropriate fast.

[1] Note, the Vigil of the Immaculate Conception and the Ember Days should still be observed, which are separate from the schedule here. For instance, in 2020 Ember Saturday of Advent is December 19, which should be observed as a day of fasting by virtue of it being an Ember Day. These days of stricter penance would replace the general St. Martin’s Lent discipline mentioned here.