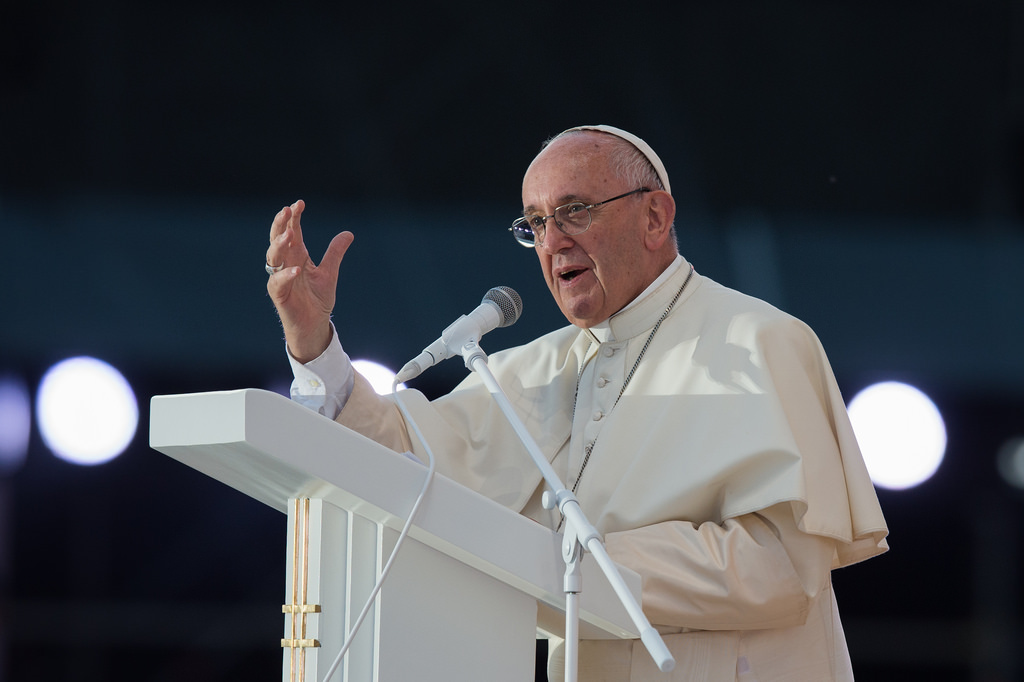 We have Pope Francis recently saying that nation states must yield their sovereignty to “intergovernmental institutions that manage their common interests.” And a homosexual politician who aspires to lead America proclaims that committing sodomy with a man he calls his “husband” has “moved me closer to God.”

The Pope has identified “climate change” as a threat to the “common good” and declared himself convinced of this by having examined the evidence, which he asserts is beyond doubt or denial. The nature of this evidence and his competence to judge it are crucial questions he never addresses. He tacitly assumes he has the scientific understanding and political acumen to justify his call for a global power to save the planet from short-sighted national governments. And he tries to strong-arm us into supporting his Leftist agenda by invoking the power and prestige of his office.

In the case of Mayor Pete (Buttigieg), we have a politician who appears to be running for the presidential nomination of the Democratic Party largely on the strength of his claim that sodomy has made him a better Christian. “Sanctity through Sodomy” appears to be his campaign slogan. And the promotion of homosexuality has become so central a concern of the media that Mayor Pete has become its overnight darling. No one appears to have the courage to point out that sexual perversion is not a qualification for high office and that Christianity has some rather pointed things to say about it, none of them supportive.

Similarly, few appear willing to say that the Pope is talking through his miter when it comes to his qualifications as an expert on climate science or international law, and that even were he to possess such qualifications, his job description does not include prescribing political structures for policy objectives.

There is, indeed, a disorientation taking place: most everyone appears to be facing the wrong direction. The Pope should be confronting the evils of sodomy and pederasty, especially in light of the sickening perversions of the clergy that reach up into the very circle of his own advisors. But the Pope appears more concerned with climate change and immigration issues for which he prescribes broad political solutions he has no power to bring about and no business trying to impose upon anyone.

And politicians should be the last people to assume a position of moral leadership, given the level of venality, deceit, corruption and slander that characterizes the world in which they live and move and have their being. Yet, there is no group of people more avid to discuss virtue and to preen themselves on being exemplars of it than candidates on the stump.

What we are witnessing is the coalescence of politics and religion under the aegis of liberalism. Under Pope Francis, the Church has moved radically away from its supernatural mission and ever closer to being an adjunct of the liberal political parties in the West. It used to be said that the Catholic bishops in the United States were the Democratic Party at prayer. The witticism should now be amended to omit the part about prayer. And what is true of the U.S. Catholic bishops is generally true about the rest of the bishops in the world: they appear to be committed to the Leftist agenda and eager to lend their assistance to its aims. Pope Francis is the natural leader of the politicized hierarchy of our time.

Mayor Pete, like other politicians, realizes that religious leaders are either complicit in the moral perversion he represents or cowed into silence by the media. So, he steps into the bully pulpit of the elected official and extols aberrant behavior as a model for Christian perfection. Who will oppose him in this? Cardinal Cupich? Cardinal Wuerl? Archbishop Gregory? Pope Francis?

There are a few voices, mostly Protestant evangelicals, raised against this hijacking of religion by the homosexual lobby, but they are either ignored or denounced as hateful (i.e. un-Christian) by the media. The Catholic Church, given the ongoing scandal of its episcopate and priesthood, lacks both the credibility and the will to oppose this usurpation of moral leadership.

Many Church leaders, Pope Francis foremost among them, contend that the Leftist agenda represents an implementation of Christian teaching. This agenda includes open borders, government entitlements, homosexual “marriage,” gender fluidity, abortion, the criminalization of “hate speech” and a movement toward one-world government, among other things. Occasional low-keyed dissent from one or another of these positions by the Pope or a stray bishop is utterly ineffectual. Half-hearted opposition is half-hearted consent.

The Church has lost its moral voice. Instead, Church leaders equate liberalism with morality and talk vaguely about compassion and toleration; about welcoming the stranger, who may cut your throat; about welcoming the “LGBTQ Catholic” into the so-called faith community; about the need to “accommodate” and “accompany” people who want morality redefined  so that they are no longer in violation of it.

We have for a very long time relied upon Pope and priest to tell us what is right. We can no longer do this with confidence. In a sense, we have to grow up spiritually. We have to make the truth something that we know and love and live; something that grows inside us; not something that we receive from without and pay weak homage to with superficial observances.

That God draws good out of evil is an easy thing to say. It is less easy when this drawing out characterizes the spiritual life of our time; when it becomes the often painful process that gives shape to our soul. But we must get over the notion that we are here primarily to enjoy ourselves. We are here to take up our cross. And in that cross we will find a deeper joy than anything in the world can give us.

We tend to forget that the Church was nourished by the blood of the martyrs. And from historical accounts, we know that the seed of conversion was sown among many in the coliseums as they watched the way the Christians died, singing joyfully. “What can allow a man to face death – a terrible death – with joy in his heart?” the people wondered. Some of them were blessed to find out. Perhaps we will join those who were so blessed. As the world darkens, the light shines more brilliantly. Let’s look to the light.