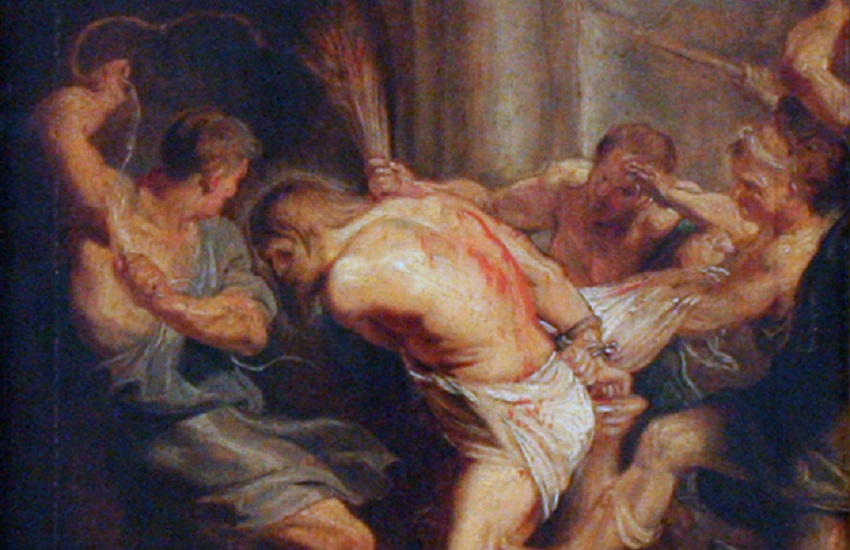 The Fatima Center wishes you a blessed and grace-filled feast of the Most Precious Blood of Our Lord Jesus Christ!

“[C]onverse in fear during the time of your sojourning here. Knowing that you were not redeemed with corruptible things as gold or silver … But with the precious blood of Christ, as of a lamb unspotted and undefiled” (I Peter 1:17-19).

Just as the Old Covenant between God and the Israelites was sealed with blood (of calves and goats), the New Covenant was sealed with the Precious Blood of Jesus Christ, for “without the shedding of blood, there is no remission of sin.” (Heb. 9:22)

Seven times in Our Lord’s lifetime, He shed for us His Precious Blood – precious because It is united to His divinity and also because, by the eternal decree of God, It was to serve as the price of our Redemption. (Read here for a meditation on the seven occurrences.)

Our Lord continues daily to offer the Holy Sacrifice of His Blood on our altars, “reconciling all things unto Himself, making peace through the Blood of His Cross, both as to the things that are on earth, and the things that are in Heaven.” (Col. 1:20)

The Most Precious Blood Prefigured in the Old Testament

In today’s Divine Office readings for Matins, in a sermon of St. John Chrysostom[1], is related how the power of the Most Precious Blood of Jesus is prefigured in the Old Testament. The sermon refers to the story of the tenth plague inflicted by God on the land of Egypt. Having endured nine plagues, Pharaoh still obstinately refused to let the enslaved Hebrews leave Egypt to worship God.

“God has foretold the death of all Egypt’s firstborn at midnight because they retained His firstborn people. But that His chosen nation would be spared – for they were living together in the same land – God devised a visible sign that would save them. A wonderful symbol, one which vividly brings home to us the power of blood! Now the divine wrath is striking the land, now the Destroyer is hurrying to every home!

“What does Moses do? He says, ‘Slay a yearling lamb and smear the doorposts with its blood.’ Such advice, O Moses? Is sheep blood capable of delivering a human being? Yes, he says; not, of course, because it is blood, but because it foreshadows the blood of the Lord.

“… brute blood saved the Israelites, not by its own merits but because it pointed to the advent of divine blood. And the Destroyer passed by the homes whose entrances were smeared with blood and dared not enter.

“Likewise the devil must now flee from the soul sealed, not with the blood of an ancient type, but with the very blood of Christ, the divine Lamb. If the Destroyer fled in terror from the mere figure, with what unimaginable fright will Satan shrink away when he beholds the true reality!”

St. John Chrysostom further relates that the blood and water that flowed from Christ’s side, when opened by a lance as He hung on the Cross, symbolized the mysteries of the altar – the Blessed Sacrament – and baptism. “For it was from these that the holy Church was founded, through the bath of regeneration and the renewal of the Holy Spirit. … Thus from His side did Christ build up the Church, as from Adam’s side his wife Eve was brought forth.”

We now consider the parallel between the great Mystery of the Most Precious Blood of Our Lord Jesus Christ and the Trinitarian vision shown to Sister Lucia at Tuy, Spain. We invite you to add other considerations in our comment section below.

The Most Precious Blood and the Vision of Tuy[2]

Our Lady appeared to Sister Lucia on June 13, 1929 in Tuy, Spain as she was praying in the Dorothean convent chapel during her weekly Holy Hour of Adoration and Reparation. Our Lady’s formal request for the Consecration of Russia was accompanied by a most unique vision of the Most Holy Trinity. According to Sister Lucia:

“Suddenly a supernatural light illumined the whole chapel and on the altar appeared a cross of light which reached to the ceiling. In a brighter part could be seen, on the upper part of the Cross, the face of a Man and His body to the waist. On His breast was an equally luminous Dove, and nailed to the Cross, the body of another Man.

“A little below the waist, suspended in mid-air, was to be seen a Chalice and a large Host onto which fell some drops of Blood from the face of the Crucified and from a wound on His breast. These drops ran down over the Host and fell into the Chalice. Under the right arm of the Cross was Our Lady [Our Lady of Fatima with Her Immaculate Heart in Her hand] … Under the left arm (of the Cross), some big letters, as if it were crystal clear water running down over the altar, formed these words: ‘Grace and Mercy’.”[3]

St. Paul tells us: “Let us go therefore with confidence to the throne of grace: that we may obtain mercy, and find grace in seasonable aid.” (Heb. 4:16) Frère Michel de la Sainte Trinité, in his seminal work The Whole Truth About Fatima, tells us that in the vision of Tuy this throne of grace is the Holy Cross, which appeared in all its glory – immense and sparking with light – as if it were a throne for the Holy Trinity as well as being our source of salvation. Frère Michel continues[4]:

“This is the first mystery revealed to us by this Water [the big letters forming the words ‘Grace and Mercy’ which were as ‘crystal clear water’] gushing from the Throne of God: the mystery of the gift of Grace and Mercy by the entire Trinity – Father, Son and Holy Spirit – which decides, effects and completes our salvation through the redeeming Cross of Christ.”

By this Trinitarian theophany, God has revealed His great design of mercy for us and that the Holy Trinity is entirely engaged in the work of our salvation. However, we focus here on Our Lord shedding His Blood on the Cross – His Face bloody from the wounds of the crown of thorns and His Heart pierced by the lance.

The grace of salvation granted by God the Father, Who appears in this vision as the initial fountain of “Grace and Mercy,” is completely gratuitous. Thus, Our Lord Jesus Christ, “to make us see the gravity of sin and the immensity of pardon, and thus be able to touch our hearts … wished to merit it [the grace of our salvation], paying on the Cross the whole price in His sorrow and His blood.”[5]

The mystery which Our Lord gives for our contemplation is His Blood being poured out for our redemption, which is also offered to us in the Blessed Sacrament: “Suspended in mid-air was to be seen a Chalice and a large Host onto which fell some drops of Blood from the face of the Crucified and from a wound on His breast. These drops ran down over the Host and fell into the Chalice.”[6]

Lucia and her cousins, Francisco and Jacinta Marto, had seen this same vision when the Angel of Fatima appeared to them in the autumn of 1916 at the Cabeço (see “The Feast of Corpus Christi and the Angel of Portugal”), except that at Tuy the Blood of Jesus no longer flows only from His Eucharistic Body (the Host) but from the wounds in His Heart and Face.

“The vision of Tuy … introduces us to the heart of the mystery: The blood of the Chalice is the Blood of His Body. It is the same redeeming Blood at the Mass as at the Sacrifice of the Cross: in the latter It was shed in pain, while today, in the Mass, It is offered to us as a salutary drink. It is the same broken Body which is proposed to us for our food, for the holy Host is like a prolongation, a ‘true, real and substantial’ extension of the Victim of Calvary.”[7]

Frère Michel continues: “In this mystery of the Mass, the entire Holy Trinity manifests to us the secret of Its Mercy, which dispenses to us the riches of Its Grace, in the Communion of the Body and Blood of the Savior.”

We are also reminded of the power of the Most Precious Blood of Jesus in today’s Divine Office prayers for Matins, where in the Hymn we find the following excerpt:

“When our sins call down the Judge’s vengeance, may we at that hour find protection in the pleadings of this Blood, and may the hosts of evil that threaten us leave us and depart.”[8]

Who cannot see the parallel between the great Mystery of the Most Precious Blood of Our Lord Jesus Christ and the Trinitarian vision of Tuy! Who cannot see Our Lord’s proof of His infinite love for us by the shedding of His Blood on the Cross! Let us have recourse to the gift of “Grace and Mercy” from the Holy Trinity, for our salvation through the redeeming Cross of Christ.

And from the meditation referenced at the beginning of this article: “Let us return the love of Jesus by devoting to Him all the affections of our heart. Let us give Him a proof of our love by fulfilling His divine will and fearing nothing so much as to offend Him. ‘He that hath My commandments, and keepeth them, he it is that loveth Me.’ (John 14:21)”

“All-powerful, eternal God, Thou made Thy Son the Redeemer of the world, and Thy justice was appeased by His Blood. Each year on this feast we adore that Blood, which is the price of our salvation; may its power defend us against all the evils of this life on earth and prepare us for the eternal joy of Heaven.”[9]

[8] From the Hymn in the prayers for Matins, on the feast of The Most Precious Blood, The Roman Breviary in English and Latin, Vol. II, p. 1922.

[9] Collect prayer for the feast of The Most Precious Blood, The Roman Breviary in English and Latin, Vol. II, p. 1921. 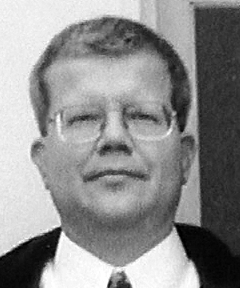 Andrew Cesanek earned a B.S. degree in Electrical Engineering from the State University of New York at Buffalo in 1983, and a Master’s Degree in Electrical and Computer Engineering from the University of Massachusetts in 1985. A supporter of The Fatima Center since 1989, Andrew left a successful career as a Software Engineer at Motorola to dedicate himself entirely to putting all of his skills at the full-time service of Our Lady’s Apostolate in 2000. Over his many years at The Fatima Center, Andrew has studied the Fatima Message extensively, becoming an expert on Fatima research material. He has served meticulously as content editor and proofreader for the Apostolate’s many print and web based resources, and verifies that all material is consistent with the Fatima Message and Catholic teaching. Andrew has also written articles for The Fatima Crusader – including the lead article on the release of the Third Secret in Issue 64 (July 2000) – and Catholic Family News, and was one of the seven contributors to The Devil’s Final Battle (2002, 2010).