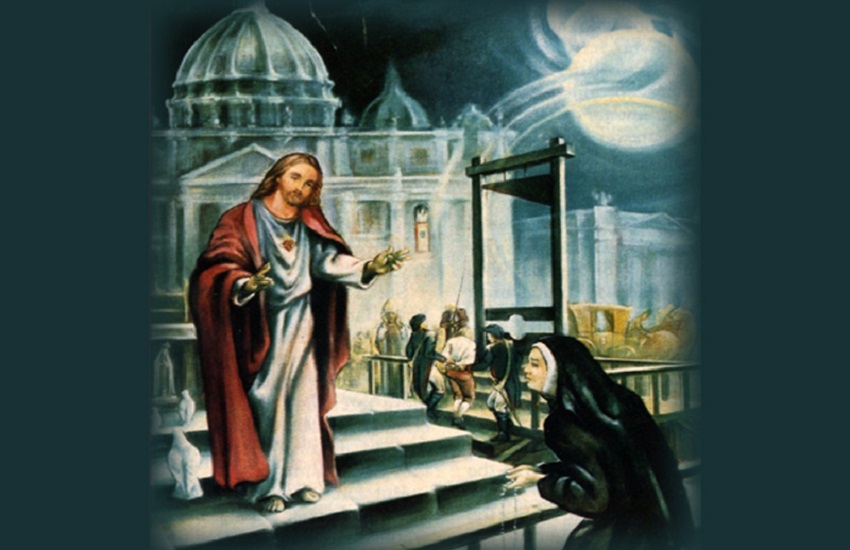 The Terrible Price of
Delaying the Consecration of Russia

The following article is a condensation of Father Gruner’s booklet, “Jesus Tells Us: Make It Known”
(https://fatima.org/wp-content/uploads/2017/03/bt004_jesus_tells_us_make_it_known.pdf).

Jesus Tells Us, “Make it Known”

In August 1931, at Rianjo, Spain, Jesus gave to Sister Lucy a very important message, telling her of His displeasure because the Pope and the Catholic bishops had not yet obeyed His command that they solemnly and publicly consecrate Russia to the Immaculate Heart of Mary.

It was a message also of warning, closely corresponding to the text of the Third Secret Vision published by the Vatican on June 26, 2000. In this Vision, the Holy Father is shot and killed – in effect executed – by a band of soldiers as he kneels at the foot of a large wooden cross. Afterward many bishops, priests and religious are also killed. At Rianjo, Jesus warns the Holy Father and the bishops (His ministers) that they will suffer these things just as the King of France was made to suffer a public execution, both punishments being the consequence of similar acts of disobedience.

The Third Secret Vision given by Our Lady clearly shows what will happen to the Pope and his ministers as a result of their refusal to do the Consecration of Russia, and Our Lord tells them that it is a punishment for their disobedience to Our Lady of Fatima’s request – which Our Lord refers to as His own command.

Other Fatima Groups Ignore this Revelation

It is interesting that the two prayers that Our Lord Himself taught to Sister Lucy are published in almost none of the literature put out by other Fatima apostolates. Why not?

This revelation was given in 1931, just after the Fatima apparitions had been formally approved by the Church. Sister Lucy was ill; she was fatigued by all the constant attention which then inundated her, and she needed to get away from people continually wanting to inquire of her about the Fatima apparitions.

So in August of 1931, Sister Lucy was sent by her superiors to the small maritime village of Rianjo, incognito. Even the people in the house where she was staying did not know who she was; only the owner of the house knew, no one else. And one day she was there in the chapel in Rianjo, a chapel dedicated to Our Lady, and she was praying for the conversion of Spain, of Portugal, of Europe, of Russia, and of the world.

He then dictated two prayers to her, and asked her to pray them often:

“Sweet Heart of Mary, be the salvation of Russia, Spain, Portugal, Europe and the whole world.”

“By Thy pure and Immaculate Conception, O Mary, obtain for me the conversion of Russia, Spain, Portugal, Europe, and the whole world.”

Jesus Warns Those Who Delay and Obstruct His Command

And then Our Lord went on to say:

What is this reference to the King of France? The King of France had been commanded by Jesus to consecrate France to His Sacred Heart, and the kings of France, for one hundred years, had refused to do this. Our Lord gave the command through Saint Margaret Mary Alacoque, and it was passed on to the King.

Our Lord gave this command on June 17, 1689. For one hundred years to the day, the kings of France refused to obey. Then on June 17, 1789, King Louis XVI of France was stripped of his power by the uprising of the Third Estate, and four years later he was publicly executed at the guillotine.

These are terrifying words. They are a threat and a prediction. Our Lord would not predict such a dire chastisement for the Pope and the bishops if it were not a serious matter, if they were not under a grave obligation to obey.

Despite the lies commonly circulated even by people who claim to be devoted to Fatima, it is important to understand that this command of God through Our Lady of Fatima to consecrate Russia to the Immaculate Heart of Mary, imposes a very serious obligation on the Pope and the Catholic bishops.

Jesus and Mary Our Only Hope

Our Lord warns – even threatens – His ministers with a terrible chastisement for their disobedience. At the same time He gives advice to all of us here. While He complains about His ministers’ delay, He goes on to say, “They will do it, but it will be late.” He then, so to speak, turns His attention to us, the faithful, and the priests who obviously don’t have the power to consecrate a country as the Pope and the bishops do. He turns His attention to us and says, “It is never too late to have recourse to Jesus and Mary.”

By these words, “It is never too late to have recourse to Jesus and Mary,” Our Lord is inviting all of us to greater prayer. Pray, pray, especially now as you become aware that you are in extreme danger because the Consecration of Russia has not been done.

We are all in danger of undergoing tremendous sufferings in this life, and many souls are in danger of going to hell for all eternity unless the Consecration of Russia is done soon. Please now hear and obey the invitation of Jesus to pray to Him and Our Heavenly Mother, now that you know it is so late, and are more aware of the facts, the dangers, the lateness of the time, and also what the solution is.

But don’t be disheartened; don’t give up hope. Remember, it is never too late to have recourse to Jesus and Mary. That is something we must always keep in our hearts.