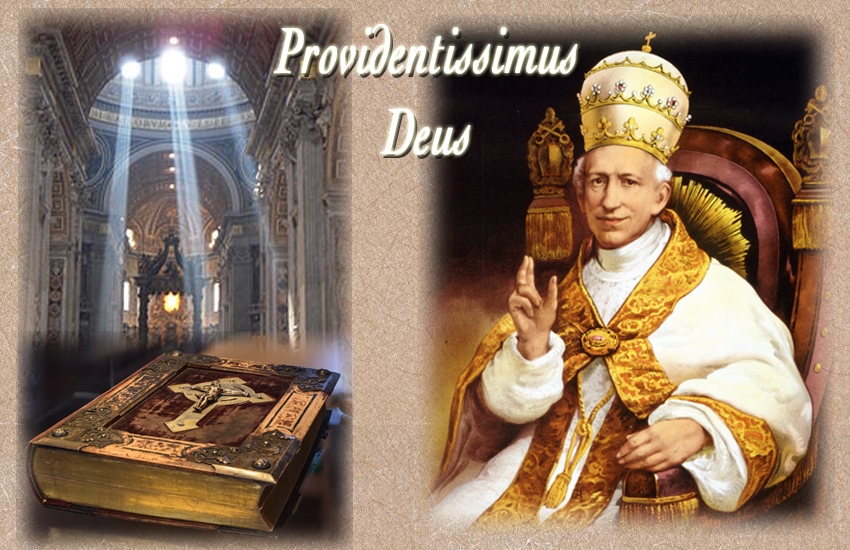 Part 3 – Basic Catechism on the Bible

“For all the books which the Church receives as sacred and canonical, are written wholly and entirely, with all their parts, at the dictation of the Holy Ghost; and so far is it from being possible that any error can co-exist with inspiration”
– Pope Leo XIII (Providentissimus Deus, 1893)

The Catholic Church teaches that the Sacred Scriptures are without any error. The term used for this reality is called “inerrancy,” which means that what is contained in the pages of Scripture is free from any falsehood. This includes all the books of the Bible, and pertains not only to strictly spiritual matters, but also to matters of history.[1]

The Nicene Creed states that the Holy Ghost “spoke through the prophets,” which tells us that the Word of God is transmitted through the prophets using the words of men. This does not entail that the sacred writers put forth their own made up ideas, but it does mean that anything approved by the Bride of Christ as Sacred Scripture, having been written by man, is guided in truth by the Holy Ghost. Error is incompatible with God, as God can only lead us into truth. As St. John explains, “God is light, and in Him there is no darkness” (1 Jn 1:5), and St. Paul insists, “It is impossible for God to lie” (Heb 6:18). It is an insult to God, though fashionable in modern biblical scholarship, to suggest that the Bible transmits what is true only in what pertains to faith and morals. The contention is that the Bible is true in transmitting “religious” things, but matters relating to the human sciences are not necessarily true.

This is categorically false. It is an idea to be soundly rejected. Pope Leo XIII, in Providentissimus Deus, using an infallible declaration from the First Vatican Council, states with the utmost clarity that God is the author of Scripture.[2] Not only is this teaching from the First Vatican Council, it is a ratification of teachings solemnly declared at the Councils of Trent and Florence. For anyone to declare that the Sacred Scriptures contain even historical error is to suggest that these three infallible Councils erred. Thus the teaching magisterium of the bishops in communion with the Pope would be in error. Ultimately, it is even to ascribe an error to God and to the solemn teachings of His Church.

The logical outcome of such an assertion is extremely dangerous. It certainly puts one’s eternal salvation at risk, but it further destroys the very foundations of the Faith and of the Church. If the Church has erred in an ‘infallible teaching,’ what is to guarantee that any of her other teachings are correct? Why should anyone believe Church authorities today, or in any age? What would then ensure the Church’s teaching regarding Jesus Christ and His salvation is correct? For that matter, how would one even know God is Truth, that God is Creator, that God even exists? Yet is this not the path which the vast majority of our society has already trod? Is this not why so many people – even Catholics – have accepted the deceitful myth of the Big Bang and the pernicious lie that humans evolved from apes? Given sufficient time, the liberal-modernist denial of Scripture’s inerrancy logically and inevitably leads to atheism, the rejection of the Church and the denial of God.

It is true that some things in Scripture are hard to understand. It is also true that copyists or translations may be done poorly. As with all matters of faith, we have the great saints to look to for wisdom. In correspondence with St. Jerome, St. Augustine said the following: “I have learned to pay such honor and reverence as to believe most firmly that none of their writers has fallen into any error. And if in these Books I meet anything which seems contrary to truth, I shall not hesitate to conclude either that the text is faulty, or that the translator has not expressed the meaning of the passage, or that I myself do not understand.”[3] In a recent article, I wrote of the official translations we should consult. Thus, we need not worry about text or translation errors as did Augustine before the circulation of the completed Latin Vulgate. It is our duty to humbly follow St. Augustine’s counsel and admit our misunderstanding of the Bible if it seems to contrast with human knowledge. The other possibility is that our human knowledge is in error and that is the source of the discrepancy with Scripture. As professed in the Act of Faith, the Catholic should believe God and His Church above scholars, experts, even our senses, intellect and reason.[4]

Regrettably, many are too heavily influenced by the zeitgeist of our society. We live in a rationalistic age that believes only in material presentations of truth. This leads to many taking issue with some of the historical truths in the Bible. It is unfortunate how often even faithful individuals fall prey to passing and illogical human sciences, thereby casting aside or disregarding Sacred History. The historicity of the Scriptures is guaranteed by the dogma of inerrancy, which means that we should defer to the proper sense of Scripture even when it is contradicted by human sciences.

In our next article, we will investigate how we should read the Sacred History of Genesis.

[1] Condemning the liberal and modernist system of biblical interpretation on this matter, Pope Leo XIII taught: “For the system of those who, in order to rid themselves of these difficulties, do not hesitate to concede that divine inspiration regards the things of faith and morals, and nothing beyond, because (as they wrongly think) in a question of the truth or falsehood of a passage, we should consider not so much what God has said as the reason and purpose which He had in mind in saying it – this system cannot be tolerated.” Providentissimus Deus, No. 20.

[2] “The Books of the Old and New Testament, whole and entire, with all their parts, as enumerated in the decree of the same Council (Trent) and in the ancient Latin Vulgate, are to be received as sacred and canonical. And the Church holds them as sacred and canonical, not because, having been composed by human industry, they were afterwards approved by her authority; nor only because they contain revelation without error; but because, having been written under the inspiration of the Holy Ghost, they have God for their author.” Providentissimus Deus, No. 20.

[4] The popular Act of Faith, which should be memorized by all young Catholics as part of their catechism and prayed daily, “…I believe these and all the truths which the Catholic Church teaches because Thou [God] hast revealed them who canst neither deceive nor be deceived.” Note also how the liturgical hymn, Adoro Te Devote, composed by St. Thomas Aquinas to honor the Blessed Sacrament, professes,
“Not to sight, or taste, or touch be credit,
hearing only do we trust secure;
I believe, for God the Son has said it –
Word of truth that shall ever endure.”