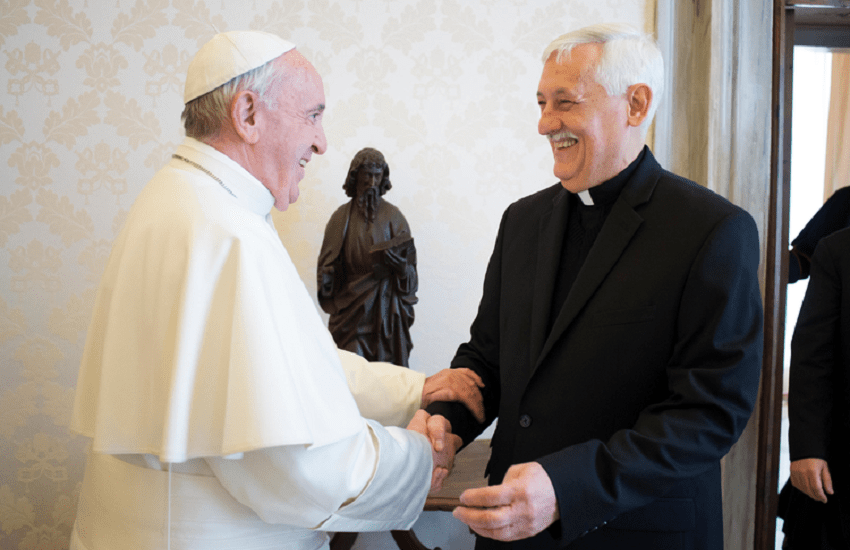 The Head of the Jesuits Denies the Existence of the Devil as a Person. Is Anyone Surprised?

It has long been known that Arturo Sosa, SJ, elected Superior General of the Jesuits in 2016, is a Marxist sympathizer and a Modernist of the worst sort — a Modernist being, in essence, a synthesizer of all heresies (to paraphrase Pope Saint Pius X), who reduces Catholic doctrine and dogma to empty formulae that can be filled up with whatever content the Modernist pleases in keeping with “current thinking.” See my earlier column on this subversive cleric here.

But now, in an interview with the Italian journal Tempi, Sosa has openly denied the existence of the Devil. Asked point blank: “Does the Devil exist?” he replied as follows [my translation]:

In different ways. We need to understand the cultural elements to refer to this figure. In the language of Saint Ignatius it is the bad spirit that leads you to do things that go against the spirit of God. It exists as the evil personified in different structures but not in people, because it is not a person, it is a way of actuating evil. He is not a person like a human person. It is a way for evil to be present in human life. Good and evil are in a permanent struggle in human consciousness [conscience], and we have ways to show them. We recognize God as good, entirely good. Symbols are part of reality, and the devil exists as a symbolic reality, not as a personal reality.

The canonist Ed Peters protests that, having uttered this explicit heresy — the existence of a personal Devil being a dogma of the Faith — ecclesiastical authority should investigate and impose sanctions on Sosa as appropriate. Don’t hold your breath. Sosa is a friend of Francis. Nothing will happen to Sosa. For that matter, nothing will happen to any of the legions of Modernists who prowl about the ruins of the “Church of Vatican II.”

Meanwhile, as noted in my column linked above, Sosa is delighted to exploit the abuse of the Ignatian principle of “discernment” by his fellow Jesuit, who is now the Pope. What Saint Ignatius of Loyola counseled as a method of discerning God’s will as to choices of action that are moral, Francis has perverted into a permission to continue committing the sin of adultery while receiving Holy Communion in the process of “discerning” whether one will cease committing adultery with one’s “second wife” or “second husband.”

Sosa applies this corrupt notion of discernment not merely to the Sixth Commandment injunction against adultery, to which there are no exceptions, but to all of Catholic doctrine. Quoth Sosa on Our Lord’s warning that whoever puts away his wife and marries another commits adultery:

“So then, there would have to be a lot of reflection on what Jesus really said. At that time, no one had a recorder to take down his words. What is known is that the words of Jesus must be contextualized, they are expressed in a language, in a specific setting, they are addressed to someone in particular.”

To which the interviewer objected: “But if all the words of Jesus must be examined and brought back to their historical context, they do not have an absolute value.” After some Modernist babbling from Sosa, the interviewer pressed the point:

Q: Is it also possible to question the statement in Matthew 19:3-6: “What therefore God has joined together, let no man put asunder”?

A: I go along with what Pope Francis says. One does not bring into doubt, one brings into discernment…

Q: But discernment is evaluation, it is choosing among different options. There is no longer an obligation to follow just one interpretation…

A: No, the obligation is still there, but to follow the result of discernment.

Doctrine is a word that I don’t like very much, it brings with it the image of the hardness of stone. Instead the human reality is much more nuanced, it is never black or white, it is in continual development…. [D]octrine is part of discernment. True discernment cannot dispense with doctrine.

Q: But it can reach conclusions different from doctrine.

A: That is so, because doctrine does not replace discernment, nor does it [replace] the Holy Spirit.

In short: there is no longer any fixed doctrine in Catholicism, according to Sosa. There is only “discernment.”

Francis has approved as quite in line with his pontificate the four “priorities” Sosa has established for the utterly corrupted Jesuit order over the next ten years:

Of course, the “discernment” Sosa has in mind is, as he himself has made clear, anything but the discernment of Saint Ignatius, the very founder of his order. It is, rather, the “discernment” of his friend, the first Jesuit Pope. Indeed, Saint Ignatius would unhesitatingly denounce his own successor as a heretic. As to what he would say about Francis, I will leave that to the reader’s consideration.

Can anyone in possession of the faculty of reason still doubt that we are in the midst of the apostasy that “will begin at the top” as Cardinal Ciappi warned in light of the Third Secret of Fatima? One can, however, find solace in the recognition that is it always in the very depths of a crisis that God restores His Church. That restoration cannot be long in coming in historical terms, even if many of us may not live to see it. The Triumph of the Immaculate Heart of Mary following the Consecration of Russia is inevitable.

Editor’s Note: The dogma that the devil exists, was created by God, and is a person who can act and be punished for his actions is clearly taught in Scripture and Tradition. For the benefit of our readers, we include just one example from the Church’s infallible magisterial authority.

“We firmly believe and openly confess that there is only one true God … Creator of all things invisible and visible, spiritual and corporeal, who from the beginning of time and by His omnipotent power made from nothing creatures both spiritual and corporeal, angelic, namely, and mundane, and then human, as it were, common, composed of spirit and body. The devil and the other demons were indeed created by God good by nature but they became bad through themselves; man, however, sinned at the suggestion of the devil. … all shall rise with their own bodies which they now have that they may receive according to their merits, whether good or bad, the latter eternal punishment with the devil, the former eternal glory with Christ.