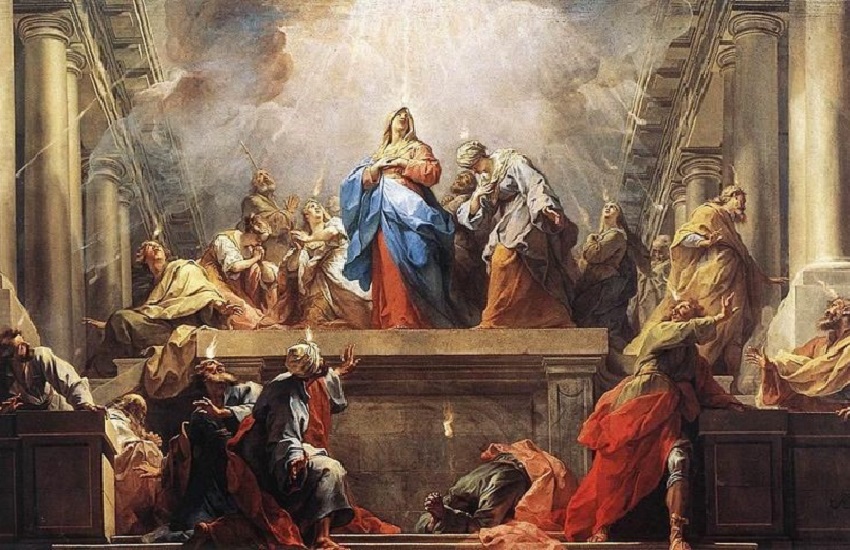 The Feast of Pentecost

On the 50th day after Easter (counting both Easter Sunday and Pentecost Sunday), Our Lord sent the Holy Ghost down upon His infant Church, as He had promised.

Today’s feast was prefigured by the ancient Jewish feast of the same name, which recalled how the Old Covenant was sealed by the revelation of the Law to Moses on Mount Sinai on the 50th day after the Passover. The Church’s feast of Pentecost similarly marks the full inauguration of the New Covenant, the birthday of the Catholic Church, so to speak, whose divine mission commenced immediately upon the completion of Our Lord’s mission.

Confirm, O God, what Thou hast wrought in us!

The great day, which consummates the work that God had undertaken for the human race, has, at last, shone upon the world. The days of Pentecost, as St. Luke says, are accomplished. (Acts 2:1) We have had seven weeks since the Pasch; and now comes the day that opens the mysterious number of Fifty. This day is the Sunday, already made holy by the Creation of the Light, and by the Resurrection of Jesus; it is about to receive its final consecration, and bring us the fullness of God. (Eph. 3:19)

In the Old and figurative Law, God foreshadowed the glory that was to belong, at a future period, to the Fiftieth Day. Israel had passed the waters of the Red Sea, thanks to the protecting power of His Paschal Lamb. Seven weeks were spent in the Desert, which was to lead to the Promised Land; and the very morrow of those seven weeks was the day whereon was made the alliance between God and His people. The Pentecost (the Fiftieth Day) was honored by the promulgation of the ten commandments of the Divine Law; and every following year, the Israelites celebrated the great event by a solemn Festival. But their Pentecost was figurative, like their Pasch: there was to be a second Pentecost for all people, as there was to be a second Pasch for the Redemption of the whole world. The Pasch, with all its triumphant joys, belongs to the Son of God, the Conqueror of death: Pentecost belongs to the Holy Ghost, for it is the day whereon He began His mission into this world, which, henceforward, was to be under His Law.

But, how different are the two Pentecosts! The one, on the rugged rocks of Arabia, amidst thunder and lightning, promulgates a Law that is written on tablets of stone; the second is in Jerusalem, on which God’s anger has not as yet been manifested, because it still contains within its walls the first-fruits of that new people, over whom the Spirit of love is to reign. In this second Pentecost, the heavens are not overcast, nor is the roar of thunder heard; the hearts of men are not stricken with fear, as when God spake on Sinai; repentance and gratitude, these are the sentiments which are now uppermost. A divine fire burns within their souls, and will spread throughout the whole world. Our Lord Jesus had said: I am come to cast fire on the earth; and what will I, but that it be kindled? (Luke 12:49) The hour for the fulfillment of this word is come: the Spirit of Love, the Holy Ghost, the eternal uncreated Flame, is about to descend from Heaven, and realize the merciful design of our Redeemer.

Jerusalem is filled with pilgrims, who have flocked thither from every country of the Gentile world. They feel a strange mysterious expectation working in their souls. They are Jews, and are come from every foreign land where Israel has founded a Synagogue; they are come to keep the feasts of Pasch and Pentecost. Asia, Africa, and even Rome, have here their representatives. Amidst these Jews properly so called, are to be seen many Gentiles, who, from a desire to serve God more faithfully, have embraced the Mosaic law and observances; they are called Proselytes. This influx of strangers, who have come to Jerusalem out of a desire to observe the Law, gives the City a Babel-like appearance, for each nation has its own language. They are not, however, under the influence of pride and prejudice, as are the inhabitants of Judea; neither have they, like these latter, known and rejected the Messias, nor blasphemed His works whereby He gave testimony of His divine character. It may be that they took part with the other Jews in clamoring for Jesus’ death, but they were led to it by the Chief Priests and Magistrates of the Jerusalem which they reverenced as the holy City of God, and to which nothing but religious motives have brought them.

It is the hour of Tierce, the third hour of the day (that is, nine o’clock in the morning), the hour fixed from all eternity for the accomplishment of a divine decree. Suddenly is heard, coming from Heaven, the sound of a violent wind. It startles the people in the City, it fills the Cenacle with its mighty breath. The hundred and twenty Disciples that are within the building have been days in fervent expectation; the Divine Spirit gives them this warning of His coming, and they, in the passiveness of ecstatic longing, await His will.

A silent shower falls in the House; it is a shower of Fire, which, as holy Church says, “burns not, but enlightens; consumes not, but shines.” Flakes of fire, in the shape of tongues, rest on the heads of the hundred and twenty Disciples: it is the Holy Ghost taking possession of all and each. All belong now to the Spirit that has descended upon them. His kingdom is begun; it is manifested, and its conquests will be speedy and glorious.

But let us consider the symbol chosen to designate this divine change. He Who showed Himself under the endearing form of a Dove on the occasion of Jesus’ Baptism in the Jordan, now appears under that of Fire. He is the Spirit of Love, and love is not only gentle and tender, it is also ardent as fire. Now, therefore, that the world is under the influence of the Holy Ghost, it must needs be on fire, and the fire shall not be checked. And why this form of Tongues? To show that the heavenly fire is to be spread by the word, by speech. These hundred and twenty Disciples need but to speak of the Son of God made Man, our Redeemer; of the Holy Ghost, Who renews our souls; and of the heavenly Father, Who loves and adopts us as His children. Their word will find thousands to believe and welcome it. Those who receive it shall all be united in one faith; they shall be called the Catholic Church, that is, universal, existing in all places and times. Jesus had said: Go, teach all nations! (Matt. 28:19) – the Holy Ghost brings from Heaven both the tongue that is to teach, and the fire (the love of God and mankind) which is to give warmth and efficacy to the teaching. This Tongue and Fire are now given to these first Disciples, who, by the assistance of the Holy Spirit, will transmit them to others. So will it be to the end of time.

An obstacle, however, opposes the mission at the very onset. Since the confusion at Babel, there have been as many languages as countries; communication by word has been interrupted. How, then, is the word to become the instrument of the world’s conquest, and make one family out of all these nations, which cannot understand each other? Fear not: the Holy Spirit is all-powerful, and has provided for this difficulty. With the other gifts wherewith He has enriched the holy assembly, He has given them that of understanding all languages, and of making themselves understood in every language.

How beautiful art thou, dear Church of our God! This prodigy is not to cease with the day of Pentecost, nor with the Disciples who are its first receivers. When the Apostles have terminated their lives and preaching, the gift of tongues, at least in its miraculous form, will cease, because it is no longer needed: but thou, O Church of Christ! wilt continue to speak all languages, even to the end of time, for thou art to dwell in every clime. The one same Faith is to be expressed in the language of every country; and thus transformed, the miracle of Pentecost is to be kept up forever within thee, as one of thy characteristic marks.