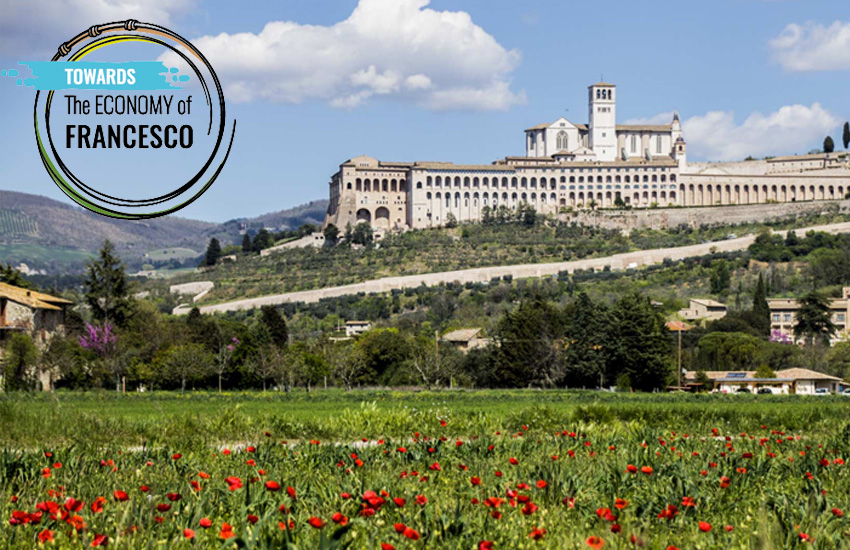 The Economy of Francesco

In an unfortunate series of events, it seems as if the Holy Father and his globalist initiatives are like the gifts that keep on giving; although, these are not gifts we would like to receive. In our last couple of articles we spoke of the Great Reset, and how the Holy Father and the globalist element in the Church at large are complicit. It is as if the pope and his accomplices are happy to extend the spirit of freemasonry and revolution throughout the globe, all under the guise of whatever is the globalist cause du jour.

Another Meeting in Assisi

An initiative that embodies this unholy spirit is the so-called “Economy of Francesco.” Admittedly, there were warning signs for this event, as he spoke about it in a letter released more than a year ago. But, due to the virus hysteria sweeping the globe, the event associated with this initiative was postponed by a considerable amount of time, took place virtually last month, and received relatively little press coverage.

Various civil and religious leaders gathered in Assisi for three days (Nov. 19-21) to kick off this event. Sadly, Assisi – the hometown of one of the most Christ-like Saints – has been ear-marked as the “beating heart of this global initiative.” More than 2000 “change-makers” from throughout the world were invited to help spearhead this ‘spirit of fraternity’ and ‘universal love.’ Vatican News stated the “change-makers” are young economists, businessmen, and women who are supposedly models of virtue with world-class expertise. Really?

Like most things with Pope Francis, it is hard to pin down what he actually is saying or desires, as he uses a host of ambiguous phrases in a quintessentially modernist style. However, to a discerning eye, there are plenty of hints that seem to reveal the true goal behind his efforts. Consider the following passage taken from his initial letter promoting the so-called Economy of Francis: “Promote together, through a common ‘covenant,’ a process of global change. One in which not only believers but all men and women of good will, beyond differences of creed and nationality, can participate, inspired by an ideal of fraternity attentive above all to the poor and excluded.”

There are three keywords/phrases that I think deserve a closer look.

First, the word ‘covenant’ is used. Now, to be fair, it is written in the document with quotation marks surrounding it, so it is not as if the word is employed in a direct sense, like an actual covenant with God. Perhaps the pope is suggesting that there is a covenant-like aspect of a social compact between peoples that can affect the economic realities of various nations. Nonetheless, this is a dangerous game, and an abuse of the true nature of a covenant, especially in religious terms.

A covenant is a sacred union between God and man, seen throughout the Bible; and the true covenant is embodied by the New Testament, where Christ establishes the True Church, to which we are incorporated through the saving waters of baptism and profession of the Catholic Faith. To even suggest that there is something supernatural or mystical about an economic relationship by employing the word ‘covenant’ is problematic to say the least, even more so by any Catholic prelate, let alone a Successor of St. Peter.

It is likely that the average unsuspecting Catholic will hear this term and subconsciously internalize a pseudo-religious nature to globalist economic realities. In my opinion, it is a disingenuous tactic that will only breed confusion. If the pope were talking about the true Social Kingship of Christ and implying that there was a way to have the economy work for the common-good of souls, perhaps that might be an instance where this could be used, but this is not the case with Francis’ economic propositions.

Second, he speaks of the notion of participation for the goodwill of men being accomplished beyond differences of ‘creed and nationality.’ Of course, there is no reason to suggest that a true Catholic economic approach should arbitrarily exclude anyone for petty reasons that are unessential, like where a man happens to be from, or what he personally believes. It is not as if we think that a man should profess the Apostles Creed in order to buy a loaf of bread.

But, there is a difference between tolerating differences, which is a reality in all societies to some degree, and suggesting that a Catholic approach to economics should be indifferent to what beliefs people hold. What we believe is foundational to our economic endeavours, because money is a resource that can be used for good or for evil. It should be of primary importance to the pope to consider the beliefs of men in any economic pursuit, as those beliefs will largely dictate what a man does with his money.

As an example, what if a man believes that it is for the so-called common good to fund supposed ‘reproductive health initiatives’ which are in reality abortive and contraceptive initiatives. If a man believes that this sort of thing is important for his society, then it must be stated that this sort of ‘creed’ or belief is not acceptable and must exclude any Catholic participation.

Furthermore, even the idea that an economy should go beyond nations is a bit absurd, as subsidiarity[1] — the principle that economic and societal interests should largely be handled on local levels — is paramount for the true common good of souls in a community. The Church has historically lauded sovereign nation-states, even on the smallest of scales, as they best know what is needed for their culture, whereas large pseudo-national bodies like the Soviet Union have always been condemned.

Moreover, in Notre Charge Apostolique (1910), Pope St. Pius X condemned the errors of the ‘social justice’ Sillon movement in France. The ‘Catholic’ leaders of that movement claimed that men of any religious beliefs were welcomed so long as they had the desire for natural goods. Reading this document, one would think St. Pius X was indeed speaking directly to Francis because Francis uses phrases and concepts nearly identical to the heretical Sillon. In this document, St. Pius X provides a summary analysis of such a false effort:

“It is frightening to behold new apostles eagerly attempting to do better by a common interchange of vague idealism and civic virtues. What are they going to produce? What is to come of this collaboration? A mere verbal and chimerical construction in which we shall see, glowing in a jumble, and in seductive confusion, the words Liberty, Justice, Fraternity, Love, Equality, and human exultation, all resting upon an ill-understood human dignity. It will be a tumultuous agitation, sterile for the end proposed, but which will benefit the less Utopian exploiters of the people. Yes, we can truly say that the Sillon, its eyes fixed on a chimera, brings Socialism in its train. We fear that worse is to come… the great movement of apostasy being organized in every country for the establishment of a One-World Church which shall have neither dogmas, nor hierarchy, neither discipline for the mind, nor curb for the passions, and which, under the pretext of freedom and human dignity, would bring back to the world (if such a Church could overcome) the reign of legalized cunning and force, and the oppression of the weak, and of all those who toil and suffer.”

Finally, the pope suggests that the whole thing should be inspired by an ‘ideal of fraternity.’ I have spoken at length in a video about the freemasonic leanings of Francis, and how the notion of fraternity is key to understanding this, so I will not go on about it here. But suffice it to say, there is a fraternity of the world, which is mundane and based in humanity rather than God, and there is a fraternity through baptism wherein we become sons of God through adoption. Since the pope is suggesting that what we believe is irrelevant, it is reasonable to assume that he is not talking about the true concept of Divine Filiation – becoming sons of God.

Again, a more incisive analysis of how this term “fraternity” is being used duplicitously is provided by Pope St. Pius X in Notre Charge Apostolique. The English tittle of this document is “Our Apostolic Mandate.” How terribly ironic that a hundred years ago this saintly pope argued against the very initiatives of his future successors because it was the responsibility that Christ Himself laid upon St. Peter and his Successors. God certainly knew what we would be facing today, and He mercifully provided the means to avoid these errors and the antidote to such poison in the very teaching of our popes. If only we would but read and heed their instruction!

There is more to say, and in our next article we will go into the initiative of ‘Inclusive Capitalism,’ which the pope has signed on to. But, we can close by saying that it seems pretty clear that the Holy Father is pushing forward with more globalist nonsense that seeks to spread the dystopia of communist materialism than anything even approaching the Social Kingship of Christ.

[1] The principle of subsidiarity has always been a hallmark of Catholic political, social, and economic teaching. It also just makes good common sense. Things are dealt with in their most effective manner by the most localized group possible. When higher levels get involved there is much inefficiency, ill-feelings, and injustice. Just imagine if a national government department was established to assign chores to children in the home (instead of the parents doing so). This department would issue decrees, oversee it being done correctly, and remedy the deficiencies. Children and parents would both be furious. It would be a waste of time, money, and resources. No one would be happy with the result. While this illustration may be a bit extreme, I hope it makes the point. The concept of subsidiarity was well-developed and defined by Pope Leo XIII in his encyclical Rerum Novarum (1891), on labor and capital.