The “Church of Accompaniment”: just along for the ride?

Pope Francis is, in theory, the spiritual leader of the billions of people who identify as Catholics. When I say “in theory”, I mean the Holy Father is theoretically leading us, not that he’s leading us in theory, because when it comes to the theory (not to mention the practice) of Catholic Christianity, the Pope seems rather uncertain of where he’s going.

We see evidence of this uncertainty, this lack of direction, in Francis’ many utterances to the effect that faith is not a philosophy — something one either believes or doesn’t believe — but a process, a journey to a destination, the nature of which he doesn’t tell us.  Perhaps, since he has expressed doubt about the existence of Hell, he is uncertain even of that final destination.

Preaching at Mass at his private chapel in Santa Marta, in November 2016, the Pope quoted a saying of Benedict XVI “that the faith is not a theory, a philosophy, an idea; it is an encounter with Jesus.” So, he said, we must ask ourselves how we can go forth to meet Jesus. We are on a journey, he said, “to encounter the Lord. To encounter Him in a good way. Not standing still. And we will encounter the Lord.”

What is the role of Holy Mother Church in this journey? Is the Church to be our facilitator, our leader, our guide? Are we to follow the teachings and practices of the Church on the straight and narrow path to the Heaven for which our souls long? Errr, not really. The post-Vatican II Church is only there to “accompany” us as we search for God — along for the ride, as it were.

In Amoris Laetitia, Pope Francis described the notion of “accompaniment” as “conversation with the priest, in the internal forum, [which] contributes to the formation of a correct judgment on what hinders the possibility of a fuller participation in the life of the Church and on what steps can foster it and make it grow. Given that gradualness is not in the law itself…, this discernment can never prescind from the Gospel demands of truth and charity, as proposed by the Church.”

Is that clear? No? Father James Bradley, writing in the Catholic Herald in April 2016 tries for a positive spin on the Pope’s confusing proposition. (The emphasis on the astounding word “might” is mine. JWB)

“In a post-Christian society the Church, in her apologetics and evangelization, has sought to move from a position of simply presenting statements of fact about the faith (however true those might be), to offering the same truths in a manner that those without a basic faith formation — and without even the generally positive attitude toward organized religion that was common until fifty years ago — might be able to comprehend and accept. 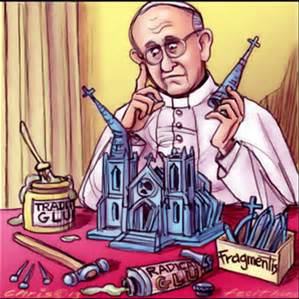 “She has moved from asserting truths of the faith as truths simply because ‘The Church teaches’ them as such, and adopted the approach of bringing people to accept those same, unaltered, and unalterable truths, not out of some vestigial respect for an institution with which they…have no connection, but because of a discovery of the person of Jesus Christ, and a subsequent personal-passionate relationship with him…, founded, nurtured, and brought to fulfilment through an ever-deepening knowledge of his expansive love.”

Is that better? Not for me! I long for the days when you could ask a priest questions like “What is right?”, “What should I believe?” and the schoolboy favourite, “Is that a sin, Father?” and get a clear answer! Instead of saying “Who am I to judge?”, I want the leaders of the Church in which I have placed my faith to lead me towards the Truth, that is towards God.

In its final report, the infamous 2015 Synod on the Family — Sandro Magister called it the “Synod of Discord” — recommended the “way of accompaniment and discernment” with respect to reception of Holy Communion by divorced and “remarried” Catholics. Apparently the churchmen failed to remember or understand what Our Lord said to His disciples: “[Teach] them to observe all things whatsoever I have commanded you….” (Matthew 28:20)

If the hierarchs of the Church — including Pope Francis — continue to shirk their duty to lead the faithful, they will cause grave disunity and confusion among us. If they authoritatively approve and expand upon the “way of accompaniment and discernment” — as, for instance, in the controversy over the demands of some German prelates that Protestants be allowed to receive Communion — they will plunge a dagger into the heart of ecclesial unity, creating a true schism in the Church. Our Lady of Fatima guide us! And God save us!! Amen!!!

Further reading: “The problem of speech that is Yes, No and No, Yes“, by Christopher Ferrara, Fatima Perspectives #1066.