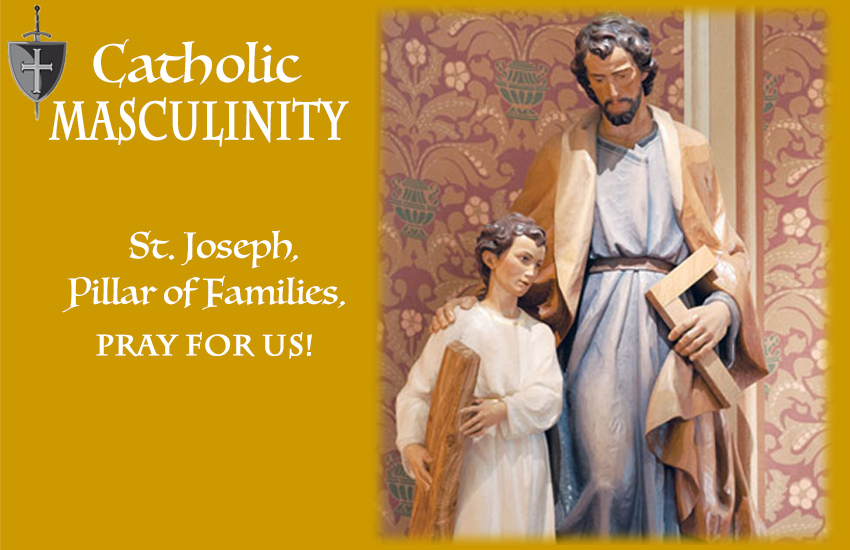 In our last article we spoke of St. Joseph as the Lover of Poverty, as a way of reminding us of the dangers of material excess during the secularized Christmas Season. This week, it seems fitting to focus on St. Joseph as the Pillar of the Family, as we edge closer to the triumphal event of the Birth of Christ into the Holy Family.

When we meditate upon the infancy narrative, we find Joseph seemingly distressed at the revelation of Mary’s pregnancy through the Holy Ghost. Unfortunately, many modern commentators present Joseph as a noble, yet hurt and confused man. They tend to present him as “troubled” by the news of Our Lady’s pregnancy: he doesn’t wish to hurt Mary’s reputation as a fiancé “engaged” to him, but pregnant “out of wedlock” and not by him. Like much of the modern trends in biblical scholarship, this interpretation is sheer nonsense.

At this point, Mary and Joseph were already married in accordance with traditional Hebrew custom. To consider them merely “engaged” is an anachronistic misunderstanding based upon our societal conventions. In the time of Christ, Jewish couples would go through a two-stage marriage process. The first would be what we might call “betrothal,” and the second would be in accordance with tradition’s use of the term “consummation.” An important distinction is that the first step was public and already entailed the commitment of both. It was common for a couple to go through the first stage, and then the husband would spend time building a home for the expected consummation and beginning of family life.

In Matthew 1:18 we learn that “Mary was espoused to Joseph, before they came together, She was found with Child, of the Holy Ghost.” To suggest that Mary was something like an “unwed mother,” is not only erroneous, but rude and even sacrilegious against Our Lady’s immaculate purity. In the next verse we see that Joseph was a “just man, and not willing to publicly expose her.” When the Bible calls a man “just,” it is a reference to his religiosity, piety and virtue. Joseph was a magnificently devout man, and his marriage to Mary followed the proper stages. His hesitancy to bring his legal and legitimate wife into his home was not because of any public perception, or because ‘there might be talk,’ or because he suspected violations of the Sixth Commandment. There is no allusion in the Bible to any such thing. Rather, it is because of his great and perfect humility. Consider the context! What the Bible does say is that St. Joseph is just. The reference is thus to his relationship with God and how well he lived out Our Lord’s exhortation to be “perfect as your Heavenly Father is perfect” (Mt 5:48).

Joseph knew who Mary was. He may not have known that She was the Immaculate Conception, but he knew that She was holier than anyone else he had ever known.[1] He had never known Her to have sinned. He knew She had lived a life consecrated to God in the Temple since She was three. He knew She was unlike any other woman in the world.[2] He may not have known every detail of things yet revealed, but he knew that a Virgin would bring forth the Messiah. He knew of his family lineage through the House of David, and he knew the arrival of the fulfillment of the prophecies of the Old Testament was at hand.

Upon hearing of Mary’s miraculous conception, Joseph would not have doubted Her truthfulness. He knew She was with Child by the power of the Holy Ghost, and the weight of this responsibility was immeasurable. Beholding Our Lady’s purity, Her unparalleled beauty, and now being aware of Her heavenly royalty, the humble St. Joseph did not consider himself worthy of Her. In true humility, he saw himself not befitting of such a role, as it was divine in origin. Like Saint Padre Pio, who felt unworthy of the stigmata, Saint Joseph loved God so much that he couldn’t view himself as having lordship in a fatherly way over his Lord and God.

St. Joseph was only able to overcome his humble sense of unworthiness by a ‘miracle’ – an outpouring of God’s grace. Namely, God sent an angel to tell St. Joseph not to be afraid and to let him know it was the divine will that he be the husband and protector of Our Lady. Filled with wisdom and prudence, St. Joseph rightly discerned that the angel indeed brought a message from God. Then, always being perfectly obedient to God, he joyfully and promptly cooperated with the unique grace received (cf. Mt 1:20-24).

Upon his change of heart and acceptance of the task, St. Joseph became the Patriarch of the Holy Family. Throughout those unseen years of Christ’s youth, it was Joseph who built and guided a family worthy of the Son of God. Jesus, the Son of the Carpenter, apprenticed Joseph and in His human nature became an image of His earthly father, in the way that we all resemble our fathers. Jesus Our Lord kept the commandments; therefore He honored His father and His mother. What a mountain of a man Joseph must have been to deserve the honorable obedience of our Savior!

Furthermore, the concrete fortitude of Joseph’s countenance must have been unmatched. It is hard enough for the average man to handle the stress of running a normal household, with normal children. Yet somehow Saint Joseph could withstand the weight and power of the Creator of Heaven and Earth, living amongst him, looking up to him with the eyes of a child. It sends shivers down my spine to think what the childlike gaze of Jesus Christ would have felt like as He looked up at Saint Joseph, lifting up His arms in the motion that all children do when they want their father to hold them.

As if the weight of raising the Second Person of the Holy Trinity wasn’t enough, Joseph also gave our Blessed Mother the love, respect, and protection befitting of the Immaculate Conception. What an awesome responsibility to have to be the head of One Who Is Perfect.[3] Yet the Pillar of Families gave the Mystical Rose a home life befitting of the New Eve. No matter the material poverty, Joseph himself became the pillar and bulwark of the New Eden requisite for the long awaited Woman prophesied in Genesis 3:15.

The mystery of St. Joseph’s majesty is endless. In these times of terrible confusion about family and fatherhood in our decaying society, let us look to St. Joseph. All men must strive to foster a pious and fervent devotion to him. How else do we expect to lead our families well? Beg him for the grace to imitate him; to have a holy headship over your family. This, too, is an awesome responsibility, yet God has entrusted it to you.

As Christ Himself looked to Joseph, carrying heavy loads of wood on his shoulders from forest to workshop; let us look to the man who showed the Child Jesus how to carry His forthcoming Cross, for inspiration to carry ours.

Saint Joseph, Pillar of Families, pray for us!

(Read the next article in this series,  Part 4 – Chaste Guardian of the Virgin)

[1] Have you ever met someone who is very pure and innocent? A certain beauty radiates from them. We sometimes get a glimpse of this in those religious who consecrate themselves to God. Yet the Blessed Virgin Mary far exceeds the purity, innocence, and perfection of anyone we may ever know on this earth. That kind of sanctity is in some way visible and palpable to all, yet even more so to those who are just.

[2] I once heard a sermon in which the heretical statement was made that Our Lady was an ordinary fourteen-year-old girl whom God ‘happened to choose.’ Nothing could be further from the truth. No one who knew Our Lady would have ever described Her as “an ordinary girl.” Could you see yourself describing a perfectly sinless person as ‘oh yeah, she’s just like the girl next door”!? These kind of heretical and sacrilegious statements only come from the mouths of those who do not know Our Lady and who lack piety.

[3] When one meditates upon this reality, it makes complete theological sense that St. Joseph must also have been personally sinless. If he had suffered any actual sin, he would not have been able to be the Head of the Holy Family, guiding and directing both Our Lady and Our Lord. Tradition holds that St. Joseph was sanctified within his mother’s womb, not at conception, but certainly by the time he was born. Thereafter, he never committed a sin.