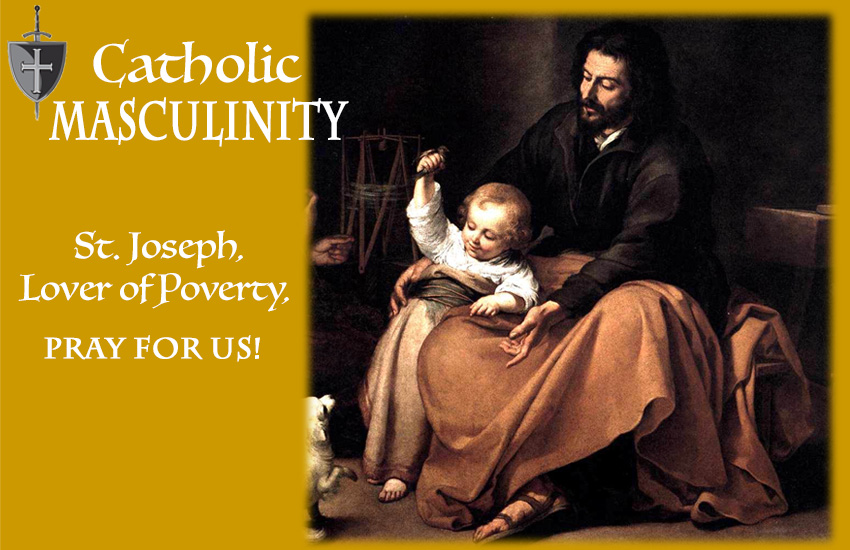 As mentioned in the introductory article to this series on masculinity after the model of St. Joseph, we will unpack some of the titles given to St. Joseph in his litany. We will not go through the titles in any particular order. As Advent has begun, it seems appropriate to begin our series contemplating the virtue of Poverty, which St. Joseph consummately demonstrates for us.

In our society, Advent is erroneously viewed as the “Christmas Season.” Our society still associates great joy with Christmas, but unfortunately, the austerity and penitential nature of the Advent season is all but a foreign concept to even most Catholics. The Christmas season actually begins at Christmas and goes all the way through February 2nd.[1] This is the season traditionally known as “Christmastide.” The four weeks leading up to Christmas, although weeks of great anticipation, are meant to be four weeks of penance and preparation for the Feast of Christmas. The four weeks remind us of the four millennia that the world waited from creation to the coming of Christ.

To be an upright Catholic man in today’s ‘modernity’ is an exercise in being counter-cultural and waging an unremitting counter-revolution, striving to restore God’s right order at every level of society. We must reject the trappings of the world in order to live a virtuous life. Throughout the month of December we are encouraged to attend parties, drink, eat to excess, and spend thousands through credit cards or purchase-financing. As men molded according to St. Joseph, we must reject this diabolical inversion of the true season of Advent.

To love poverty does not only entail financial austerity. It is possible to be financially poor but have no concept of poverty, and conversely, it is possible to be wealthy and to understand the meaning of poverty. Poverty itself has no intrinsic goodness, and in many cases is a burden. However, the practice of poverty is a practice in virtue. The benefit of practicing poverty is found in self-denial and cultivation of the Cardinal Virtues. Great fortitude and temperance is required to adopt poverty in one’s life. Furthermore, prudence is required to discern between necessary and unnecessary things, and almsgiving enables one to live a life of greater justice.

St. Joseph demonstrated his love for poverty in the Gospels; however, I would argue that his greatest acceptance of poverty is largely missed. To be sure, Joseph embraced an austere life as a craftsman and humble father. The birth of Christ in a cave, the Flight to Egypt, and his laborious occupation all demonstrate his detachment from worldly goods. However, his chastity, in my opinion, is the greatest demonstration he shows us of true poverty. Poverty does not only mean eschewing material things, but it is ultimately about sacrifice. We embrace poverty when we willingly deny ourselves the greatest of pleasures and comforts. Sacrifice is supposed to hurt, and it is ordained towards a greater good.

Joseph embraced the call to Holy Purity in his unique marriage to the Blessed Mother. In doing so, he demonstrated a great sacrifice and love of poverty. He loved the Mother of God more than any of us can ever understand, yet he guarded Her virginity and kept Her inviolate. The children at Fatima described the Virgin Mary as the most beautiful woman imaginable. Some theologians and artists depict Joseph as an older man in an attempt to make his great chastity seem more feasible. But, there is great reason to believe that he was a young, strong and virile man,[2] which in fact makes his chastity that much more heroic. St. Francis de Sales, Cornelius a Lapide, Francisco Suarez, Saint Alphonsus Ligouri all teach that Saint Joseph was sanctified and regenerated in his mother’s womb prior to birth. He had perfect control of his passions and temperaments, thus was able to admire the beauty of Mary, yet still practice perfect continence.

None of us have been sanctified in our mother’s wombs like St. Joseph, but we have been baptized. Through our baptism we were regenerated and given the graces necessary to live a life of virtue and perfection. St. Joseph cooperated with the graces bestowed on him by God, and his love of poverty forged a character more ironclad than any man on earth. The daily renunciation of earthly pleasures was a norm for St. Joseph. He entered into a special marriage with Mary already having cultivated his chastity through a supernatural love of poverty.

Our culture desires that men be effeminate: soft, inconstant, pleasure-seeking, and useless. In order to obtain a level of virtue worthy of Heaven, we must learn to love poverty. By giving away our resources to others, we will build a greater trust in God’s Providence. By rejecting common comforts we will strengthen our resolve against the temptations of the flesh.

Why not approach this penitential season of Advent with the desire to love poverty like St. Joseph. Start by praying to him every day for this grace. Be heroic in your generosity, and deny yourself daily. Abstain from “Christmas parties,” sweets, and liquor during Advent (there will be time for measured celebration in the proper season of Christmas which begins on the 25th of December). An excellent form of self-denial is fasting from entertainment and sports. Instead, one can spend more time as a father teaching and interacting with one’s children or in acts of service for one’s wife that serve the family’s greater good. Make the effort to fast from food and technology. Start taking cold showers, and reject the consumerist approach to Christmas shopping. These things may be difficult, but precisely because of that they will go a long way towards helping men be less effeminate.

Remember, the Holy Family celebrated the First Christmas in a cave; therefore, let us also seek greater poverty as we await the coming of the Messiah.

Saint Joseph, Lover of Poverty, pray for us!

(Read the next article in this series,  Part 3 – St. Joseph, Pillar of Families)

[1] First there is the prominent Octave of Christmas – eight days of special solemnity which all hold the same liturgical rank as the 25th of December. There are also the Twelve Days of Christmas which conclude with the great feast of Epiphany (Jan. 6). In fact, in the first centuries of Christianity, Epiphany was the principal ‘Christmas feast’ and held greater importance than the Nativity of Our Lord. The Christmas season includes such notable feasts as the Circumcision of Our Lord, the Most Holy Name of Jesus, the Holy Family, and the Baptism of Our Lord. The Christmas Season lasts forty days and ends on Candlemas Day (Feb. 2), which is also the Feast of the Purification of the Blessed Virgin Mary and the Presentation of Our Lord in the Temple (4th Joyful Mystery of the Rosary).

[2] The great early Church Doctors, including St. Jerome and St. Athanasius, taught that St. Joseph was a young man and that he lived and died as a virgin! He is also presented as young in ancient Christian artwork. It seems the notion that he was an older man stems from a second-century apocryphal document going by the name of Protoevangelium of James. While that work contains some edifying and legitimate traditions, it was also condemned on account of errors and thus explicitly rejected as a candidate for the Canon of Scripture.

It is quite likely that the Protoevangelium sought to present Joseph as older in order to safeguard Mary’s perpetual virginity. It claimed that the “brethren of the Lord” referred to in Scripture were Joseph’s children from a prior marriage. However, this argument runs contrary to the more ancient traditions that these ‘brethren’ were members of Our Lord’s extended family. The notion that Joseph was an older man is not held by the Church Fathers, makes far less sense theologically, and demonstrates less reverent piety towards St. Joseph. Sadly, it gained wider acceptance in the East and has become more popular today through that more convoluted passage.