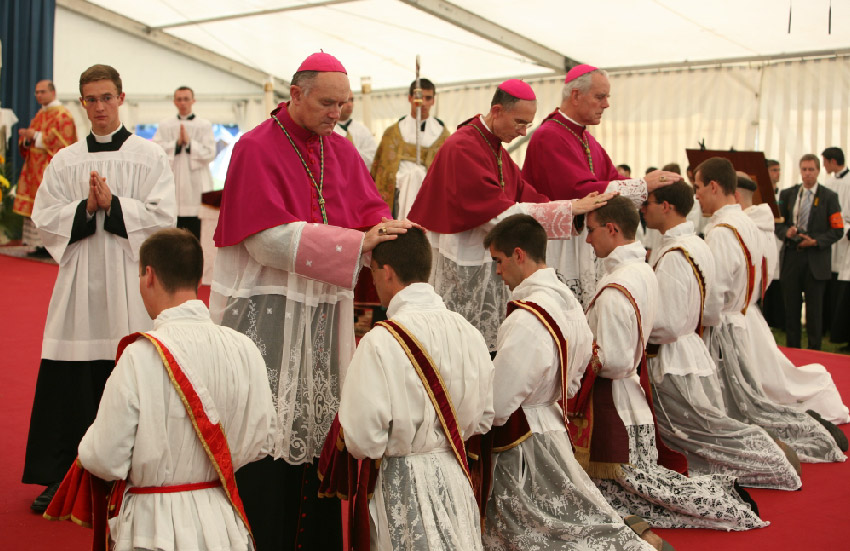 State of Necessity and Supplied Jurisdiction

In the previous article we looked at the ecclesial concept of jurisdiction and the supreme law of the Church. Now we further that discussion by discussing supplied jurisdiction given a state of necessity, and considering how this applies to the SSPX.

SSPX priests are commonly said to be without the necessary jurisdiction for the sacraments of Confession and Matrimony, although under Pope Francis these issues have been directly addressed.[1] Thus, today no one should continue to make that argument. (If they are unaware of these latest developments, then one can charitably point them out.)

However, the SSPX has been around longer than the current Holy Father, so what has been the justification for their hearing of confessions and witnessing of marriages all those years?

Once again we can return to the Catholic Dictionary. The concept of supplied jurisdiction is defined as follows: “In ecclesiastical law, a form of delegation supplied by the Church, enabling a priest who is otherwise unauthorized to validly absolve penitents in the sacrament of penance. Thus jurisdiction is supplied in the case of common error (when people think that the priest has jurisdiction); in doubt of law or fact, assuming that the doubt is sincere; and if a priest’s jurisdiction had inadvertently expired.” (emphasis mine)

Ultimately, Holy Mother Church, the Mystical Bride of Christ, can directly supply the jurisdiction necessary for the salvation of souls. The proper hierarchy and the canonical laws of the Church are very important, but they exist to serve the Body of Christ, not to oppress it. They are not given by God to mitigate grace, to detract from the means of saving souls, to change the true Faith necessary for salvation, or to alter that which God Himself has revealed in Sacred Tradition and Sacred Scripture.

Therefore, jurisdiction can be supplied by the Church herself in order that the health of souls and the edification of the faithful may be accomplished. It is possible for priests to abuse this reality, as it is possible for anyone to abuse any legal reality, but it does not change the fact that supplied jurisdiction exists when the necessary conditions are met.

I should add, it is dubious as to whether the jurisdiction of the SSPX should have been doubtful as Ordinaries and superiors are not to restrict jurisdiction. If the priest is suitable and the good of the faithful requires his services, this jurisdiction cannot be refused to him.

The Church also recognizes a State of Necessity in Canon 1324. The law does not define what a state of necessity would be in all cases, as it would often be relative to the circumstance. For example, Canon 844 even allows for Catholics to attend Mass or Confession with the Orthodox if no Catholic parish is present in a given location.[2] Implicit in this law is the fact that their valid sacraments, while considered illicit, can be a means of salvation. Therefore, in a state of necessity, due to lack of a Catholic Mass, the Orthodox option would suffice and the Church herself directly supplies the necessary jurisdiction.

I do not mean to imply that this is a “good” option one should seek. After all, in my understanding of Catholic tradition, Roman Catholics are dissuaded from assisting at an Orthodox Mass. However, I do mean to point out that ecclesial laws should be applied fairly and objectively, without bias or an ‘ecumenical’ favouritism. Here we see how the current Code of Canon Law even recognizes confessions (a sacrament normally requiring jurisdiction) from priests who are undoubtedly in schism. Yet we have already amply shown that the SSPX is not in schism. Therefore, a much more charitable and realistic view should be afforded to supplied jurisdiction for SSPX priests.

The same Canon 844 even explicitly states that physical or moral impossibility is sufficient cause for a Catholic to approach the sacraments of those who are in formal schism without transgressing the current canonical laws. The clause of moral impossibility is an intriguing inclusion because it affords a wide application. Many people who assist at the SSPX would argue that attending the local parish near them is a moral impossibility on account of the scandal, sacrilege, irreverence, and modernist teaching they encounter there. This moral impossibility is raised to an even higher level when parents are trying to fulfill their God-given duty of raising children as faithful Catholics.

Now, in the case of the Novus Ordo (New) Mass, although it is valid (assuming the proper form, matter, and intention is present at the consecration by the priest), it may still be morally impossible for someone to attend this particular Mass.[3] There are a number of factors that could contribute to this.

For instance, it could be that a parish offering Mass using the Novus Ordo Missae is known for heretical preaching and liturgical abuse. A person might fear they would lose (dilute or weaken) their Faith in the Real Presence since the Blessed Sacrament is rarely given fitting reverence. It may be that the immodesty is too great or that grave scandal is given by the lack of piety. Or, it may be that a parish offers a somewhat reverent Mass, but a father may have to make the decision that his family needs something more than just an “okay” liturgy, especially since traditional parishes and chapels offer a whole range of catechesis and formation that is almost never available anywhere else.

So many of us have fallen into the habit of accepting mediocrity in our local parish church, and this alone proves the necessity for good doctrine and zeal for the Faith. Not only that, but we have witnessed over the last several decades a veritable auto-destruction of so much that is sacred. We know that the Catholic Church will remain, as Christ promised; however, this does not mean that we must put our supernatural faith at risk because of legalistic uncertainty. God desires that men be saved, and we can be certain that in a state of necessity such as ours, the SSPX has been and will continue to have supplied jurisdiction as necessary in their holy endeavour to transmit what all our ancestors received.

Once again, the fact that faithful Catholics can reasonably make the argument that attending their local parish is a moral impossibility is by no means an indictment against the SSPX, but rather one more patently obvious ‘data point’ that a grave crisis exists within the Catholic Church today.

If the loss of the Catholic Mass of our ancestors, the loss of sound doctrine, and even the closures of our churches and restrictions on our sacraments does not constitute a real ‘state of necessity’ – then what does? Would not any loving, compassionate, and merciful mother extend to her children the help they need for their material well-being? If natural mothers do this willingly, then should we not trust in receiving far more from the most perfect of Mothers – Holy Mother Church?

[1] After the Year of Mercy, the Holy Father extended indefinitely the recognized jurisdiction for SSPX confessions, and in 2017 he also recognized the SSPX’s ability to witness weddings in the normal manner with diocesan approval.

[2] Canon 844.2 reads: “Whenever necessity requires it or true spiritual advantage suggests it, and provided that danger of error or of indifferentism is avoided, the Christian faithful for whom it is physically or morally impossible to approach a Catholic minister are permitted to receive the sacraments of penance, Eucharist, and anointing of the sick from non-Catholic ministers in whose Churches these sacraments are valid.” This clearly refers to the Orthodox for they have valid sacraments (Protestants do not).

[3] Editor’s Note: It must be mentioned that there are two fundamental problems with the Novus Ordo Mass, concerning faith and governance. First, in his cover letter to The Critical Study (i.e., The Ottaviani Intervention), which was sent to Pope Paul VI in 1969 explaining why the New Mass should not be allowed, Cardinal Ottaviani wrote: “The Novus Ordo represents, both as a whole and in its details, a striking departure from the Catholic theology of the Mass as it was formulated in Session XXII of the Council of Trent,” and constitutes a “grave break with tradition”. (The Suicide of Altering the Faith in the Liturgy [hereafter, SAFL], pp. 14, 94-95.)
Furthermore, we have an infallibly defined dogma of the Catholic Church which concerns the Novus Ordo. As explained in SAFL: “The customary liturgical rites of the Church must be preserved: it is a defined teaching of the Catholic Church that the Mass is to be offered according to the custom of the Church, and therefore the Profession of Faith solemnly prescribes adherence to the traditional rites. The proposition that the traditional rite can be changed into a new rite by any Church pastor whosoever is a solemnly anathematised heresy:
“‘If anyone says that the received and approved rites of the Catholic Church customarily used in the solemn administration of the sacraments may be despised, or may be freely omitted by the ministers without sin, or may be changed into other new rites by any church pastor whosoever, let him be anathema.’” (SAFL, pp. 4-5.) [The cited dogma is from the Council of Trent, Session VII, Canon XIII, Pope Paul III, 3 March 1547 (D.S. 1613).]