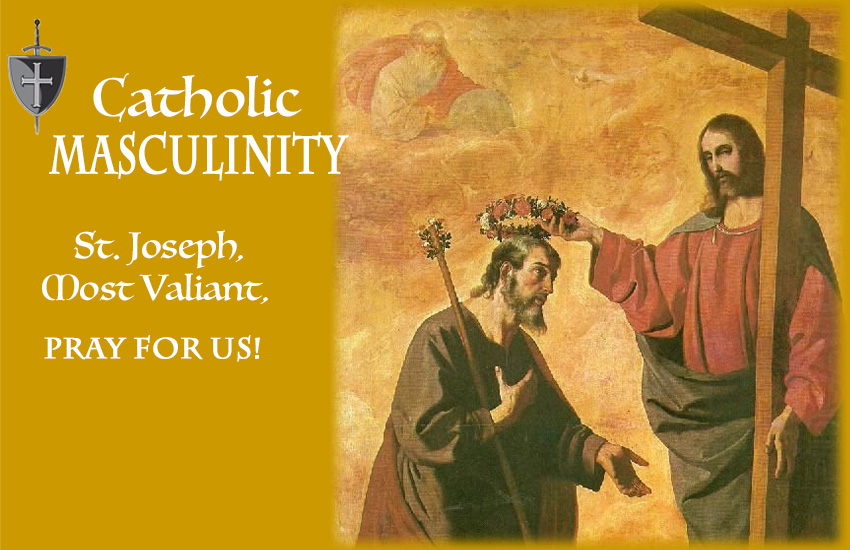 To be valiant is to demonstrate valor. Valor is defined as a demonstration of great courage, especially in battle. Often when we think of Saint Joseph, we envision a mild, perhaps even elderly man. This view may be the influence of certain artwork. Unfortunately, this timid presentation of Joseph does not help, and in some ways does harm to, our understanding of Joseph as the Warrior of the Holy Family. In a past article, we showed that the sensus fidelium has consistently seen St. Joseph as a young and powerful man, a man from whom sprung forth heroic virtue. Keeping this more accurate image of Saint Joseph in mind is useful in understanding the role of his valor in the Holy Family.

There is no mention of St. Joseph in the Bible that alludes to him participating in any physical battle, thus we can assume that the title of Valiant may be applied to another sort of battle. Surely it is believable that Joseph was a physically competent man, and due to his skills as a craftsman, it is certain that he could have swung a sword like he did an axe. However, our battles in the Christian life, although at times manifested in our material nature, take place on the spiritual plain with constant ferocity. “For our wrestling is not against flesh and blood; but against principalities and powers, against the rulers of the world of this darkness, against the spirits of wickedness in the high places.” (Eph 6:12)

Our ultimate battle is against satan, and in our day, the demon is relentless in his hatred of the human race. The ancient dragon tirelessly seeks to poison the well of Divine Life by using every method he can to spread spiritual and moral disease into the heart of every family. Sister Lucia, before her death, rightly prophesied that the final battle for souls would take place in marriage and in the family.[1]

We need not dive into the tragedy that is the state of marriage and family in the 21st century, but needless to say, it is bleak.[2] We have all been touched, directly or indirectly, by the deluge of disorder that enwraps the very underpinnings of society. We are correct in taking the aforementioned words of Saint Paul to heart, and we must believe that the greatest theatre of battle is in fact on the Plains of Prayer. Souls living in a state of grace, mothers tenderly caring for their children, and fathers resting on bended knee are like unyielding crusaders against the devils. Furthermore, Saint Paul tells us in the next verse that we must put on the armor of God. This requires us to cover ourselves in Divine Help, with the sacraments as our artillery against the wickedness and snares of the devil.

Fortunately, we can look to the Most Valiant Saint Joseph as our guide. Christian men have been fooled in our time, and our interior lives have become soft and flabby. Too often we see prayer as a feminine pursuit, and for some reason[3] it seems as if we have dispensed with any manly form of piety.

Men are often called to be “vulnerable” in the spiritual life, but is this a good thing? Yes, it is a good thing if by vulnerable we mean that a man lays himself down in front of the Lord to be molded like iron, beaten and chastised into a perfected form.

We often hear of God as Father, but what does this Fatherhood look like? Perhaps we should look to Joseph, for he is after all the earthly example of the fatherhood that Christ subjected Himself to. We should expect to find austerity and discipline in this father-Son relationship. Saint Joseph, in a way, shows us God the Father in how he raises Christ. The greatest of human virtues are habitually present in Joseph’s daily life. It is no accident that Saint Joseph demonstrated so high a degree of valor. God the Father selected a human foster father who, in even the smallest minutia of life, modeled patience in trials and redemptive suffering, in the most exemplary manner. One would expect nothing less from the household in which Christ grew up; after all, is there any greater act of valor than the Passion of Christ?

Examine your life. Does your virtue approach the standard needed to habituate the valor required of Heaven? Is your prayer an exercise in self-comfort, or is it a training ground for war? Our Church needs men of valor more than she ever has. For too long have our swords been sheathed, watching as the Enemy parades in and out of our families, stealing innocence and life. We must say No More! to this satanic saturation of our once Christian society. It is time for valiant men to model Saint Joseph and march towards this den of thieves. Unleash the power of the Rosary and marvel at the Graceful Destruction Our Lady levels against Lucifer and his legions. Onward, Christian soldiers, the time for valor has come.

Saint Joseph, Most Valiant, pray for us!

(Read the next article in this series,  Part 10 – St. Joseph, Model of Workmen)

[1] Karl Marx infamously claimed in his Communists Manifesto that for socialism to succeed three things must be destroyed: Property, Religion and the Family.

[2] Consider the following quote by Fr. Vincent Miceli in The Antichrist (Ignatius Press, 1981): “Satan, his demons and their human henchmen know that the fate of mankind depends on the spiritual durability of family relationships. If one splits the atom [the basic building block of molecules], tremendous physical disaster results from the explosive forces released. [Likewise,] if one splits the [nuclear] family, the basic building block of society, tremendous disaster results from the explosive passions released. There is no law against splitting the atom. But God Himself forbids splitting the family. ‘What God has joined together, let no man put asunder.’”

[3] Various reasons have been put forth as to why men seem less inclined to piety. In my opinion, two of the most convincing are the following. [1] Anthropological. By nature, a man is the initiator and he gives, while a woman, on the other hand, is receptive. She receives and then takes what is given so as to nurture life within her. In the spiritual life, it is God Who is the initiator and He gives His grace. The human must receive what God gives and nurture that within his soul so that the spiritual life will flourish. Thus, the religious life comes naturally to a woman, but not so to the man. [2] Men want to be challenged and exert themselves so as to master difficult things. Since Vatican II, the Catholic Faith has largely been ‘water-down’ diluted and weakened. Gone are the exhortations to the ascetic life. It has become very effeminate. Thus, many Catholic men have been repulsed by how the faith is being practiced in most parishes. What reason would you offer for why it seems men are less inclined to piety? Please feel free to start up a discussion thread in the comments section below.