“Of whom the world was not worthy; wandering in deserts, in mountains, and in dens, and in caves of the earth. And all these being approved by the testimony of faith, received not the promise.” (Hebrews 11:38-39)

In the Epistle to the Hebrews, St. Paul relates the stories of faith of the patriarchs and matriarchs of the past. He gives us a definition of faith in the first verse of the chapter: “Now faith is the substance of things to be hoped for, the evidence of things that appear not” (Hebrews 11:1). To say that faith is a “substance” is to say that it is a real thing, the sum of particular parts that make up a whole.[1] Faith is not simply an ethereal and amorphous abstraction as many would have us believe. To have faith is not merely to hope, hence why Paul says it is the substance of things hoped for, and not simply the act of hoping.

When a man has faith, he is in possession of something invaluable, something that acts as an impenetrable bulwark against life’s suffering and trials. Faith is not only an intellectual reality, but it should be a habitual disposition of your soul, one might even say the fixed orientation of a man’s whole being towards God.[2] Our intellect is contained in our soul, thus we could say that what we believe affects – even changes – who we are. Since our intellect is in our soul and our soul is the form of our body, our credence for or against a specific idea has the potential to alter everything about us.

Simply put, what we know to be true in the depths of our being is the “stuff” we are made of. Think of a man of true faith whom you’ve encountered. Men like this are constructed from something otherworldly, almost as if they don’t live by the same norms, maxims and values most commonly found among men. They have a resolve that defies what most consider reasonable. No matter the era or circumstance, a man of true faith lives with his compass directed towards God, overcoming any and all obstacles. What makes faith such a mystery to the skeptic is that a man can be so certain of the truth of the matter, even when that thing is yet to be seen.

Imagine for a moment Saint Joseph after the visitation of the Archangel Gabriel. We mentioned in another article that Joseph did not “doubt” in the classic sense regarding the chastity of the Blessed Mother. No, he understood quite well what the Angel had to say. Through eyes and ears of faith, Saint Joseph understood to his very core, without hesitation, that the coming of the long awaited Messiah was at hand. There is good reason to believe that Joseph even knew of the coming Crucifixion, and that he would not be able to be there to protect his Wife and Son. In Catholic devotion, this is referred to as the Passion of Saint Joseph.

To suggest that Joseph went through a Passion of his own is to say that he suffered a great deal, especially throughout his dying moments. Regardless of the physical dimensions of that suffering, what is important to consider is the interior suffering experienced by St. Joseph. His foreknowledge of the death of his Divine Son was hard enough to bear, but the thought of being absent at that crucial time was even worse.

Every father knows that the greatest fear we have is failing to protect and provide for our families. I am sure fathers can relate to the anxious feeling of lying awake at night, hearing a noise from somewhere in the house, and then immediately contemplating a plan of action to protect loved ones from violence. In addition, fathers today have to contend with the innumerable threats that lie in wait for our children in the spiritual and moral sphere. What will be on TV at their cousin’s home? Will someone on the school bus show pornography they have downloaded to their smart phone? What leering looks or vulgar comments might their daughters face? What bullying or peer pressure towards evil will they be subjected to? What anti-Catholic garbage might they hear in a world gone mad?

In many such situations, fathers will not be able to be present to protect their families. Needless to say, as fathers, we cannot do what we are required to do for our families on our own. Therefore, we must rely on the spiritual weapons available to us as powerful defenses, as well as our own Guardian Angels and those Angels assigned by God to watch over the members of our families. To raise a child today as a faithful Catholic takes a commensurate level of faith: the more severe the danger, the greater the faith that is required.

Saint Joseph could see in his soul what was to befall his Son. He saw the nails; he felt the rippling inertia emanating forth from each infinitely dense drop of Precious Blood as It hit the ground. He saw in Mary’s face a tragic countenance, a sorrowful consolation as Her Immaculate Beauty reflected the Crucifixion as a culmination of the Annunciation. Saint Joseph took his dying breaths, knowing that in a moment he could say “it is finished” as he prepared to give up the ghost.

Most important, Saint Joseph knew that death was not the end, and that his forthcoming resting place in the Limbo of the Fathers would be a springboard to heavenly glory. He had faith in the Resurrection.[3] Surrounded by Patriarchs in Abraham’s Bosom, he continued in unmatchable faith, awaiting that moment of reunification with Jesus, to Whom he could once again say, “This is my beloved Son, in whom I am well pleased.”

Saint Joseph, Most Faithful, pray for us!

(Read the next article in this series,  Part 12 – St. Joseph, Protector of the Church)

[1] Faith has both an objective and subjective meaning. Although they are related, they mean slightly different things. Objectively, the Faith is the sum of all the truths revealed by God which the Church teaches de fide. Subjectively, faith stands for the virtue (habit) by which we assent to those truths. Moreover, an act of faith is related both to the object of the intellect and the object of the will. If you think of the simple prayer, the Act of Faith, that forms part of our daily morning prayer, you’ll have a good understanding of what faith is. For a more comprehensive treatment of faith in all its meanings and dimensions, you can study St. Thomas Aquinas’ Summa Theologiae. The first seven questions of the Second Part of the Second Part deal with Faith.

[2] Faith is a supernatural gift which God infuses into man at Baptism. Since it is supernatural, men cannot create faith, acquire it on their own, or give it to someone else, though men can serve as instruments used by God to bring others to the Faith. One who is baptized does not lose this gift of faith unless he commits a sin against the Faith, such as heresy (or apostasy). In this it differs from the supernatural gift of charity, which is lost with any one mortal sin.

[3] St. Paul explains that without the Resurrection, our faith is useless. He writes: “Now if Christ be preached, that he arose again from the dead, how do some among you say, that there is no resurrection of the dead? But if there be no resurrection of the dead, then Christ is not risen again. And if Christ be not risen again, then is our preaching vain, and your faith is also vain” (1 Cor 15:12-14) 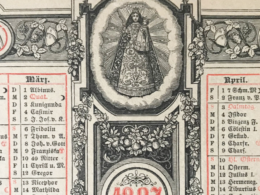 The Traditional vs. Modern Catholic Calendar 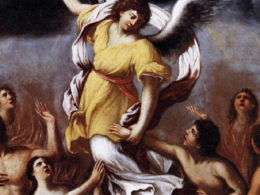 Gain Suffrages for the Poor Souls Through the Rosary

What Are Suffrages? “If they have died repentant for their sins and having love of God, but have…
byMatthew Plese
No comments 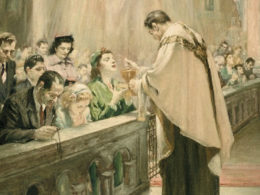 What Is Our Easter Duty? 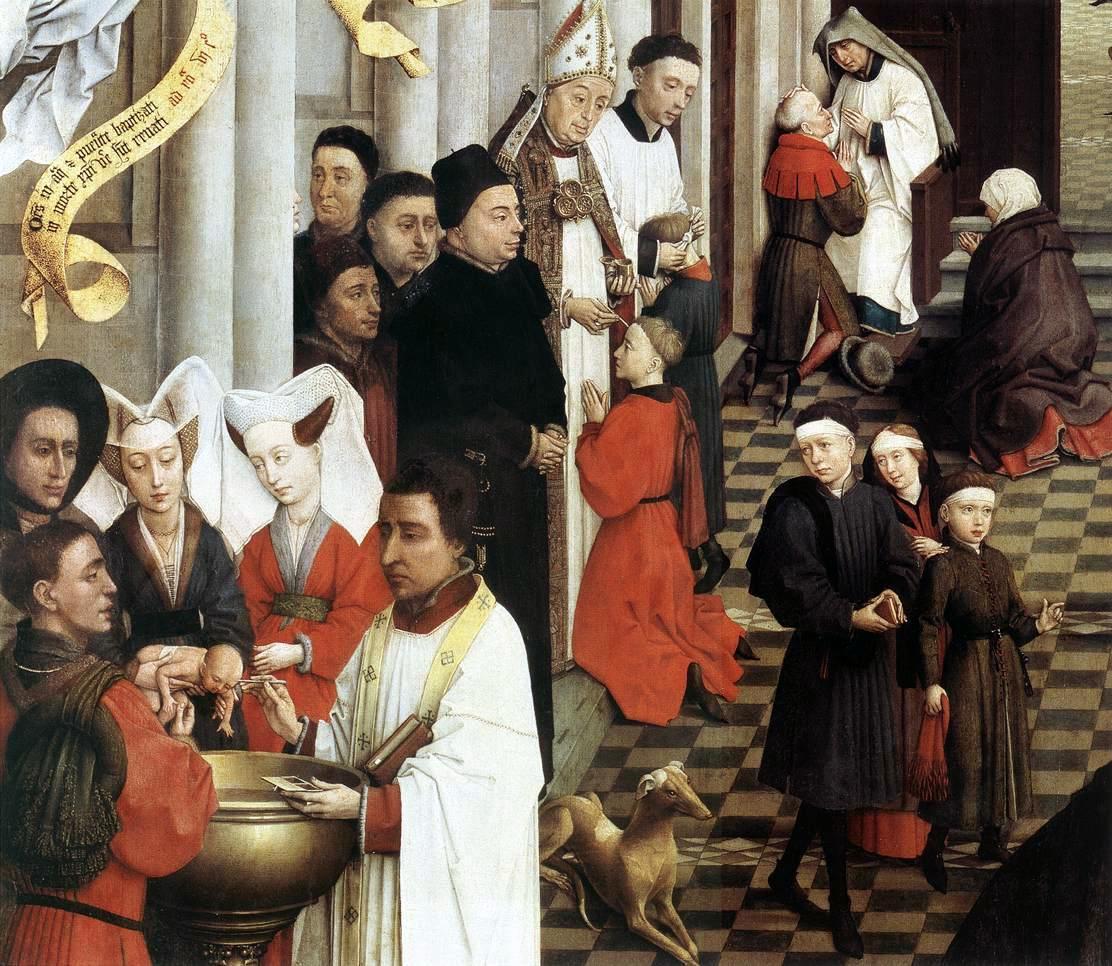 Earlier this week, Mr. Matthew Plese began a discussion on “How the Sacraments Work” by explaining the principle…
byDavid Rodríguez
No comments