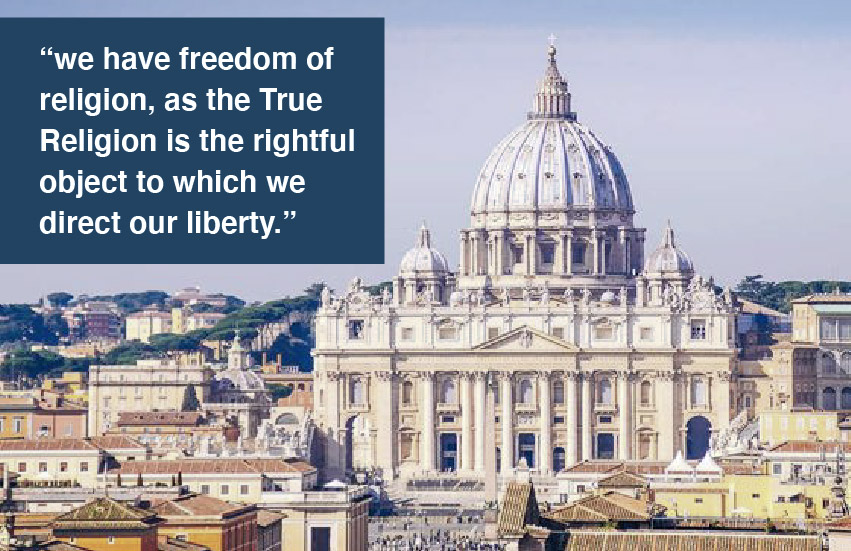 The Kingship of Christ – Part IX

(Read the previous post in this series: True or False Obedience to the King)

“Under the seductive name of freedom of cult, they proclaim the legal apostasy of society.” – Leo XIII

In the minds of most North Americans, as well as most from the Western World, the concept of what is called “religious freedom” is taken as an established principle. We must also consider this idea of so-called religious freedom as an extensive or correlative principle of “freedom of conscience.” In essence, people believe that they have the right to approach the realm of morality or religious belief in any way they see fit.

With the current overreaches of virtually all governmental structures in the daily lives of citizens, understandably the concept of religious freedom is at the forefront of our minds. For many it has been at least a month since a public Holy Mass was offered in our vicinity, and we can even read headlines of people being arrested for offering worship services. Errors of the modern understanding of religious liberty notwithstanding, it is clear that a true understanding of religious freedom is a timely concept.

Is Religious Freedom a Catholic Concept?

In a word; yes and no. True liberty is undoubtedly in harmony with, one might even say foundational for, a proper philosophical understanding of the Catholic Faith. In fact, Pope Leo XIII begins his encyclical Libertas (1888) with the following quote: “Liberty, the highest of natural endowments, being the portion only of intellectual or rational natures, confers on man this dignity – that he is ‘in the hand of his counsel’ and has power over his actions.”

Leo calls liberty the “highest of natural endowments,” referring to the uniquely human reality that we have a freedom of will in our activity, something the beasts do not share. We are moral creatures, and this true liberty is a prerequisite if we are to choose the Good. Therefore, we could make the argument that due to our human nature, we exercise our liberty, or freedom, in our assent to the saving truths of the Catholic Faith. In this sense, we have freedom of religion, as the True Religion is the rightful object to which we direct our liberty.

It is understandable that there is a level of toleration present under the guidance of statesmen who seek a societal cohesion in a land where people profess different beliefs. Nevertheless, this is only an evil which is tolerated so as to prevent greater evils, and hence is not to be promoted as a good in and of itself. As Catholics, we should never advocate that someone believe fatal errors, even if for matters of prudence we must “live and let live” in certain circumstances.

This prudential toleration, however, does not free the state from the necessity to enthrone the One True Faith as its official public religion. Pope Leo XIII, in a letter to the Emperor of Brazil in 1889, says the following about religious freedom: “…such a liberty indeed places on the same level truth and error, faith and heresy, the Church of Jesus Christ and any human institution whatever; it establishes a deplorable and deadly separation between human society and God its Author; it leads finally to the sad consequences of State indifferentism in religious matters, or, what comes to the same thing, its atheism[1].”

In a commentary on this citation from Pope Leo XIII, Archbishop Lefebvre remarks that, “professing to recognize or to favor all the gods, the State in fact recognizes none, especially not the true God![2]”

Religious ‘Freedom’ Is No Freedom at All

Suppose I suggested to you that you had “mathematical freedom”, meaning that you could decide which equations or combinations best suit your numerical preference. Some would stick to the belief that 2+2=4, while others may believe it is 5, or 55, or whatever made-up answer they ‘choose’.

Now suppose that you use this “freedom” to draw up plans for a weight-bearing structure, like a bridge. Once the errors are put into practice, it will become evident quite quickly that there was no truth to the mathematical “freedom” chosen by the erroneous engineer, as the bridge would collapse. In fact, there is so little freedom to this flawed numerical pursuit that the bridge is not even free to exist as a bridge, but only as a broken heap of material. Worse, such a false freedom would easily result in terrible damage, injuries and even human fatalities.

One might object and suggest that this sort of practical application does not apply to matters of morality or religion. This is a dangerous objection, and one that will not hold water at the particular judgement. A careful study of human history and personal experience shows that God’s moral law is actually more inflexible and permanent than even the natural physical laws which govern our universe. There are serious consequences to an erroneous religious belief, not least of which is the probability of eternal damnation.

True Freedom Is Only Found in the Truth

This may seem like a silly analogy to compare to religious freedom, but it is more similar than one may think. Catholicism is true. All deviations are either partly or wholly false. There is no freedom in error, and there is certainly no freedom in sin: “Jesus answered them: Amen, amen I say unto you: that whosoever committeth sin, is the servant of sin.” (John 8:34)

We will either be slaves to God, wherein we find our true freedom, or we will be slaves to sin, which can only lead us to the pit of hell. We must not confuse the truly Catholic understanding of this concept, one rooted in sound philosophy, Scripture and Tradition, with the modernist mentality that results in nothing other than state sponsored indifferentism.[3]

It is one thing to advocate for a state to lift unjust sanctions that impede the natural right to worship the True God; it is another to equate the civil license to congregate in a heretical assembly as akin to the lawful assembly of Catholics at Holy Mass.

During these hard times, as we await the opening of our parishes, let us pray for a deeper appreciation of the true freedom found only in the Catholic Faith.

Read the next article in this series: Freedom of Expression (Part X)

[3] A helpful papal encyclical on this subject is Gregory XVI’s Mirari Vos (1832), the first of many great papal teachings combatting the errors of modernism. There Pope Gregory explains:

“Now We consider another abundant source of the evils with which the Church is afflicted at present: indifferentism. This perverse opinion is spread on all sides by the fraud of the wicked who claim that it is possible to obtain the eternal salvation of the soul by the profession of any kind of religion, as long as morality is maintained. Surely, in so clear a matter, you will drive this deadly error far from the people committed to your care. [13] … This shameful font of indifferentism gives rise to that absurd and erroneous proposition which claims that liberty of conscience must be maintained for everyone. It spreads ruin in sacred and civil affairs, though some repeat over and over again with the greatest impudence that some advantage accrues to religion from it.” [14]

Pope Gregory XVI then states that this is a “pestilence more deadly to the state than any other.” [14]