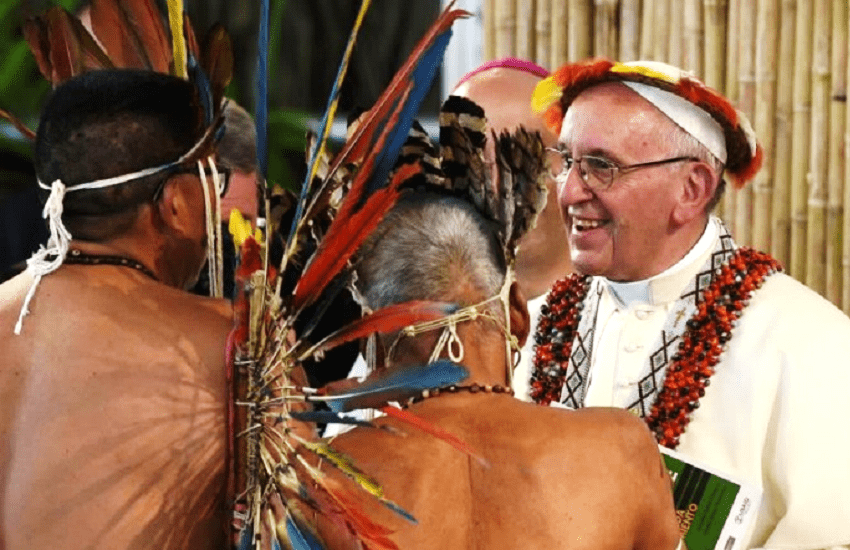 Jesuit theologian Fr. Francisco Taborda, speaking at a study seminar at the Vatican on Feb. 25-27, raised the possibility that the upcoming Amazonian Synod scheduled for next October should consider changing the matter of the Holy Eucharist, allowing the use of a South American vegetable called yuca instead of wheaten bread.

The key figures at the seminar, including Cardinal Lorenzo Baldisseri, Secretary General of the Synod of Bishops who organized the event, did nothing to censure Tarboda’s proposal but allowed him to freely voice his plan among the priests and bishops in attendance.

Taborda told Crux that climate issues warrant the change. He argued that high humidity during the Amazonian rainy season turns wheaten hosts into a pasty mush, adding that “in the Amazon, bread is made out of yuca,” a tropical, tubular-shaped root vegetable similar to sweet potatoes.

Cardinal Raymond Burke doesn’t buy this excuse. “There is something more involved than a problem of keeping the hosts fresh,” he observed. “The use of some local food, which is like bread but is not the kind of bread which Our Lord used at the Last Supper, reflects a totally horizontal view of the Holy Eucharist, in which the Holy Eucharist is the action of the community which gathers instead of the action of Christ Who gathers the community.”

In an apparent attempt to quell conservative backlash to the proposal, Bishop Fabio Fabene, Undersecretary to the General Secretariat of the Synod of Bishops, told CNA on March 8 that plans to change the matter used in the celebration of the Eucharist do “not appear in the Preparatory Document for the Special Assembly next October and therefore is not a subject of the next Synod.”

The problem is that there is nothing in his statement that denounces Tarboda’s proposal as heretical. It appears the Vatican is just slithering around to avoid censure.

Vatican collusion with Taborda’s error is evidenced by Fabene’s statement to CNA that “the changing of the Eucharistic matter is the competence of the Congregation for the Doctrine of the Faith.” He is saying that the Eucharistic matter can be changed by the CDF, when in fact it can never be changed, not even by the pope. Any change of matter would invalidate the Sacrament.

CNA appears to abet this deviation from the norm by alleging that “The Church has always enculturated the liturgy” (an error) to bring about “regional differences in the matter used in the celebration of the Eucharist,” when in fact the Church from the beginning has never once deviated from the immutable norm for the matter of this Sacrament, established by Our Lord Himself, of using only wheaten bread for the Eucharistic Sacrifice.

Contrary to what is suggested in the CNA story, the Eastern Rite tradition of using leavened bread in the Holy Sacrifice, as opposed to the unleavened bread used in the Latin Rite, in no way constitutes a departure from the essential matter of wheaten bread. Therefore it is the height of scandalous duplicity to claim that the Eastern practice demonstrates a competence of Church authorities to set aside the divinely established norm for the matter of the Eucharist.

But when we consider that the Vatican News Service is now run by the radical “LGBT” marketing firm, Accenture, such baseless, progressively-charged statements should come as no surprise.

The mere fact that Taborda wasn’t silenced at the February seminar should have tipped us off to this scandal in the works, so while his statements “are exclusively personal” (CNA) and do not represent the official plans of the synod’s preparatory document, they nonetheless could represent an “unofficial” plan that was initially delegated to Taborda in order to get the ball rolling. It may be that they are using the coming synod as a trial balloon for other such changes that are planned for the rest of the Church.

Bishop Athanasius Schneider warns that changing the matter of the Eucharist from wheaten bread to yuca would not only invalidate the Sacrament, but even create a new religion. He said this change would be “tantamount to inventing a sacrament, alien to the one established by Our Lord, which has been preserved unchangingly by the bi-millennial tradition of the entire Church in East and West.”

Schneider argued, “To celebrate the Eucharist with yuca would mean introducing a kind of a new religion.”

Such a change would indeed be a travesty of the worst kind, occasioning idolatrous worship of “veggie hosts” in place of the Real Presence of Our Lord’s Body, Blood, Soul, and Divinity in the Blessed Sacrament. Those who “communicate” at such faux “masses” would not be partaking of Christ, but of the earth. Who is to say that this isn’t part of an environmentalist attempt to get man to bow to the planetary idol of “mother earth?”  With the cancerous errors of the ‘recyclical’ Ladauto Si permeating the Mystical Body, it is no surprise that such tumors should appear!

The other obvious blunder in Taborda’s proposal is that it contravenes Christ’s words in Holy Scripture, when he told the people from the Mount, “Give us this day our daily bread.” He didn’t say “Give us this day our ‘daily veggies,’” but “super-substantial bread” – by definition a grain product. (Mt. 6:11)

Cardinal Burke points out that “the ancient custom of the Church, according to which only wheaten bread may be used for the Eucharistic Sacrifice, was confirmed at the Council of Florence.” (Bull of Union with the Armenians, Exsultate Deo, November 22, 1439)

He assures us that “If any other matter is used, the Sacrament of the Holy Eucharist is not validly confected.”

Bishop Schneider reminds us that “the Council of Trent, Pope Pius XII and John Paul II taught that the Church has no power to change the substance of the sacraments.”

The Amazonian synod in October will also consider the matter of married priests.