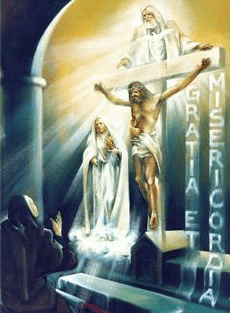 At the heart of the Full Message of Fatima is Our Lady’s request for the Consecration of Russia to Her Immaculate Heart. On June 13, 1929, while Sister Lucy was at the novitiate of the Dorotheans at Tuy, Spain, the Blessed Virgin appeared to her as she was praying by herself in the convent chapel at midnight. Our Lady said to Sister Lucy:

The moment has come when God asks the Holy Father to make, in union with all the bishops of the world, the consecration of Russia to My Immaculate Heart, promising to save it by this means. So numerous are the souls which the justice of God condemns for sins committed against Me, that I come to ask for reparation. Sacrifice yourself for this intention and pray.

The bishops of Portugal consecrated their country to the Immaculate Heart on May 13, 1931. Speaking later about the graces which were given to that nation as a result, Cardinal Manuel Gonçalves Cerejeira, the patriarch of Lisbon, affirmed that the graces, which completely transformed Portugal, were due to Our Lady of Fatima.

“To express what has been going on here for twenty-five years,” the prelate said, “the Portuguese vocabulary has but one word: miracle. Yes, we are convinced that we owe the wonderful transformation of Portugal to the protection of the Most Holy Virgin.”

Cardinal Cerejeira went on to say that the manifold blessings Our Lady obtained for Portugal are a sample of what She will obtain for the entire world, once Russia is properly consecrated to Her Immaculate Heart. “What has taken place in Portugal proclaims the miracle,” he asserted. “And it foreshadows what the Immaculate Heart of Mary has prepared for the world.”

There will be peace throughout the world. Nations will accept the reign of Christ the King, and will thus base their laws upon His Laws. The Catholic Church will be renewed, and all peoples and nations will be converted to the fervent practice of the Catholic Faith.

Sadly, this is not what Pope Francis wants. On June 2nd, the Vatican press office released the text of remarks made by Pope Francis in a May 30th audience with a delegation of Russian Orthodox churchmen. The Pontiff spoke about “Uniatism”, the union of Eastern Rite churches with the Roman Church, in which the authority of the papacy is accepted without loss of separate liturgies or government by local patriarchs. What Francis said was, “Uniatism as a path of unity is not valid today.” 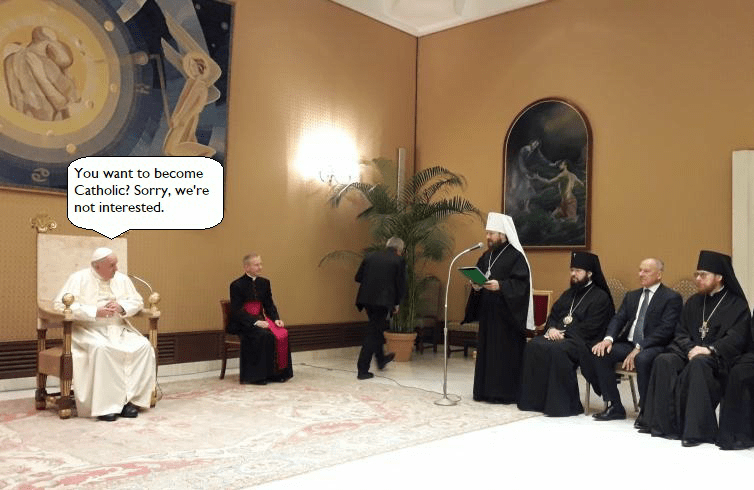 It gets worse. Although Francis was merely reiterating the decades-old Vatican policy of Ostpolitik (see “Why isn’t the Mother of God being obeyed?”, by Father Fabrice Delestre), he did so in a particularly forceful way.  He promised the Russian visitors that he would  not interfere “in internal matters of the Russian Orthodox Church, nor in political issues … And those who meddle do not obey the Holy See.”

“When some Catholic faithful, be they laypeople, priests or bishops, raise the banner of Uniatism, which does not work anymore, and is over, then it causes me pain,” he said. “The Churches that are united in Rome must be respected, but Uniatism as a path of unity is not valid today.”

Who do you suppose Francis is talking about when he refers to “some Catholic faithful, be they laypeople, priests or bishops”? I think of the famous line from the movie Taxi Driver, “You talkin’ to me?”

Holy Father, as one who refuses to embrace the false ecumenism promoted by the Vatican Secretaries of State since Vatican II, I beg you to remember the inalterable dogma of the Church, extra Ecclesiam nulla salus – “outside the Church there is no salvation”!

Whether you want it, Holy Father, is not the point. Heaven wants it, and has told us so, very clearly, in the Message of Fatima. Those of us who believe will continue to pray fervently for the Consecration of Russia and the conversion of that poor nation, and for the many graces, including a period of peace, which will follow. We know Our Lady will keep Her promise!

When will the Pope and all of the Catholic bishops of the world consecrate Russia to the Immaculate Heart of Mary? Why must the Pope not fail to heed Heaven’s request? Click here to read more!