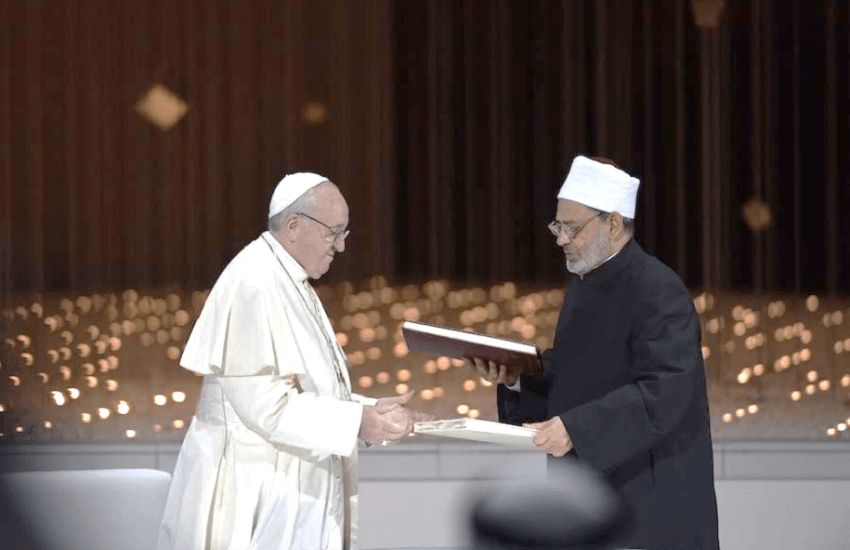 On February 4, 2019, Pope Francis incited new controversy by signing a joint statement with the head of Egypt’s al-Azhar Mosque, which states that “diversity of religions” is “willed by God.”

The historic accord between Francis and Grand Imam Ahmad el-Tayeb took place during an interreligious meeting in Abu Dhabi, which marked the high point of the pope’s three-day apostolic visit to the United Arab Emirates.

The signed “Document on Human Fraternity for World Peace and Living Together” calls upon “all persons who have faith in God and faith in human fraternity to unite and work together so that it may serve as a guide for future generations.”

By “human fraternity,” the proponents of the document mean fraternity in the humanist sense. True fraternity is to extend the riches of the Catholic Faith to all peoples, for it is only through conversion to the One True Church that we become brothers and sisters in Christ.

However, the passage inciting controversy reads:

“Freedom is a right of every person: each individual enjoys the freedom of belief, thought, expression and action. The pluralism and the diversity of religions, colour, sex, race and language are willed by God in His wisdom, through which He created human beings. This divine wisdom is the source from which the right to freedom of belief and the freedom to be different derives. Therefore, the fact that people are forced to adhere to a certain religion or culture must be rejected, as too the imposition of a cultural way of life that others do not accept.”

So God grants each individual the “freedom” to resist the truth and “do whatever thou wilt”? The Church has always admonished mankind “to adhere to a certain religion,” i.e. the Catholic Church. This is not an “imposition” but a profession of the absolute truth that must be adhered to if man wishes to be saved. To say that this preaching “must be rejected” is to say that the Church was wrong for 2000 years.

Moreover, saying that “the diversity of religions” is “willed by God” has every appearance of heresy. The mission of the Church from the beginning is to bring the knowledge of God to the world and “teach all nations” (Matt. 28:19), that all peoples might leave their particular idols and creeds and be converted to the Catholic Church. The Church infallibly teaches that there is no salvation outside the Catholic Church (extra ecclesiam nulla salus), so unless Francis means that this diversity of religion is permissively willed by God to elicit the Church’s response to reach out and convert other religions, he is negating dogma and dignifying the errors of fake religion.

Naturally, other religions cannot coexist with the Catholic Church for the simple reason that Christ did not found them—they operate outside of grace. And whereas some religions may appear to agree with certain aspects of Catholic teaching, they exist in opposition to the Catholic Church, which means the Church may never unite with them.

None less than the exemplary Bishop Athanasius Schneider of Astana has come forward to rebut the pope’s February 4 joint-statement with a statement of his own in which he states that “No authority on earth – not even the supreme authority of the Church – has the right to dispense people from other religions from the explicit Faith in Jesus Christ as the Incarnated Son of God and the only Savior of mankind with the assurance that the different religions as such are willed by God Himself.”

“Christianity is the only God-willed religion,” he says. “Therefore, it can never be placed complementarily side by side with other religions.”

He reiterates the Church’s infallible teaching that “Outside the Christian Faith no other religion can be a true and God-willed way, since this is the explicit will of God, that all people believe in His Son: ‘This is the will of my Father, that everyone who looks on the Son and believes in him should have eternal life’” (John 6: 40).

“The Incarnated Son of God taught that outside faith in Him there cannot be a true and God-pleasing religion: ‘I am the door. By me, if any man enters in, he shall be saved’ (John 10: 9). God commanded to all men, without exception, to hear His Son: ‘This is my most beloved Son; hear Him!’ (Mk. 9: 7). God did not say: ‘You can hear My Son or you can hear other founders of a religion, for it is My will that there are different religions.’ God has forbidden us to recognize the legitimacy of the religion of other gods: ‘Thou shalt not have strange gods before me’ (Ex. 20: 3) and ‘What fellowship has light with darkness? And what concord has Christ with Belial? Or what part has the faithful with the unbeliever? And what agreement has the temple of God with idols?’ (2 Cor. 6: 14-16).

“If other religions likewise corresponded to the will of God, there would not have been the Divine condemnation of the religion of the Golden Calf at the time of Moses (cf. Ex. 32: 4-20); then the Christians of today could unpunished cultivate the religion of a new Golden Calf, since all religions are, according to that theory, God-pleasing ways as well.”

His Excellency reminds us that “[t]rue universal brotherhood can be only in Christ, and namely between baptized persons,” pointing out that “God gave the Apostles and through them the Church for all times the solemn order to instruct all nations and the followers of all religions in the only one true Faith, teaching them to observe all His Divine commandments and baptize them” (cf. Mt. 28: 19-20).

He backs up his point with the words of St. Augustine: “The Christian religion is the only religion which possesses the universal way for the salvation of the soul; for except by this way, none can be saved. This is a kind of royal way, which alone leads to a kingdom which does not totter like all temporal dignities, but stands firm on eternal foundations” (De civitate Dei, 10, 32, 1).

Bishop Schneider concludes by saying: “Outside the Christian Faith no other religion is able to transmit true supernatural life: ‘This is eternal life, that they [may] know you the only true God, and Jesus Christ whom you have sent’ (John 17: 3).

+ Athanasius Schneider, Auxiliary Bishop of the Archdiocese of Saint Mary in Astana”

With Pope Francis’ statement on “diversity of religions,” post-conciliar ecumenism has shifted into high gear. We pray that he cease from using his position to advance this secular humanism, remembering the warning of Holy Scripture:

“For power is given you by the Lord, and strength by the Most High, who will examine your works, and search out your thoughts: Because being ministers of his kingdom, you have not judged rightly, nor kept the law of justice, nor walked according to the will of God. Horribly and speedily will he appear to you: for a most severe judgment shall be for them that bear rule.” (Wisdom 6:4-6)