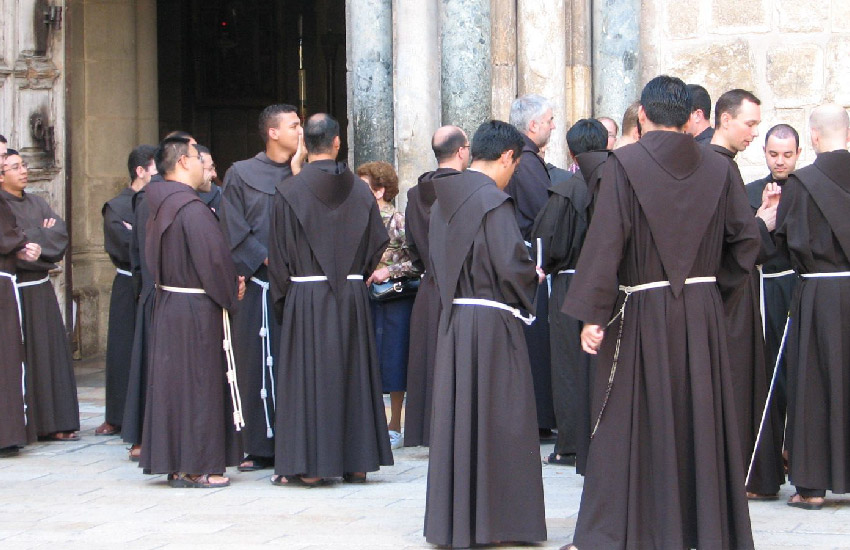 Who’s Who in the Church Militant – Part Three

Consecrated Religious: Consecrated religious are men and women who give their lives completely to God. They live in a religious community. There are several kinds of religious orders. Each one has a unique mission and charism. Religious can be either contemplative or active. Typically, they make vows of poverty, chastity, and obedience.

In Catholic terminology, these three vows are referred to as the ‘evangelical counsels.’ It has always been held that they are the principal means by which a soul attains sanctity and becomes ‘perfect as also your heavenly Father is perfect’ (cf. Matthew 5:48). Through chastity, one resists the concupiscence of the flesh and combats the capital sins of lust, sloth and gluttony. Through poverty, one resists the concupiscence of the eyes and combats the capital sins of avarice, envy, and anger. And through obedience, one resists the ‘pride of life’ and combats that capital and primordial sin of pride.

The evangelical counsels are also quite intimately related to the three pillars of penance which the Church highlights especially during lent: Prayer (obedience to God and all His legitimately established authority in men), Fasting (temperance and chastity of all bodily desires), and Almsgiving (accepting some poverty for the charity of God and neighbor).

Although the laity do not make these evangelical counsel vows per se, every Catholic, by virtue of his baptism, is called to live them according to their state in life. For example, we could say all Catholics should live in simplicity: within their means and avoiding debt as much as is reasonably possible, tithing at least ten percent, and with a proper detachment from all the goods of this world. Every Catholic, whether single or married, is called to live chastely, which primarily means living in accordance with all the implications of the 6th and 9th Commandments.[1] And every Catholic must live in obedience to all legitimately established authority over him which is legitimately exercised, be it in the ecclesial, civil, or familiar spheres.

There are many religious orders in the Church. Four examples of orders are the Benedictines, Carmelites, Franciscans, and Dominicans. The Benedictines follow the Rule of St. Benedict, written in 516 AD for monks living communally under the authority of an abbot. Their motto is “ora et labora” (work and pray). They can be either contemplative or active. The Benedictines are well-known for their devotion to the liturgy and many liturgical experts have come from their ranks, including St. Gregory the Great (+604), Venerable Bede (+735), St. Odo of Cluny (+942), and Dom Prosper Guéranger (+1875).

The Carmelites refer to themselves as the “Order of Our Lady of Mount Carmel.” Their origin is ancient, as they trace themselves all the way back to St. Elias the Prophet (9th century BC). St. Elias’ disciples lived at Mount Carmel, awaiting the Messiah; and tradition holds that a number of them adored the Christ Child at Bethlehem and that they built the first chapel dedicated to Our Lady. The Carmelites wear the Brown Scapular given by Our Lady to St. Simon Stock, and anyone enrolled in the Brown Scapular is automatically made a Third Order Carmelite. They have the spirit of hermits and often prefer silence and solitude. Some of the Church’s greatest mystical Doctors hail from the Carmelites, including St. Teresa of Avila and St. John of the Cross.

The mendicant orders are perhaps better known by most Catholics because people have more interactions with them. These orders were founded at a time when the Church needed great reform. Pope Innocent III had a dream in which an impoverished man was holding up and rebuilding the fallen Church. Shortly thereafter, he was approached by both St. Francis and St. Dominic requesting permission to start their respective orders. Both orders like to hold that their founder was the man in the Pope’s dream, but perhaps God kept the full identity hidden so the Pope would approve both orders.

The Franciscans are dedicated to “living the Gospel” and emphasize poverty and simplicity. The women’s branch is called the Poor Clares. And finally, the Dominicans are committed to learning and study and passing on the fruit of their contemplation to others. The Dominicans are known to excel in teaching and as being avid promoters of the Holy Rosary. Both of these orders played influential roles as missionaries bringing the Catholic Faith to the Western Hemisphere.

Monk: A monk is a man who is part of a religious order and who lives a communal life in a monastery, abbey, or priory under a monastic rule of life. Monks can also be priests, but they do not have to be. Monks who are not priests are usually referred to as ‘Brothers.’ Monks pray the Divine Office at the designated hours of the day. A monastery can be an abbey, governed by an abbot, or a priory, governed by a prior.

Friar: A friar is also a consecrated religious. Friars are men who are usually part of one of the four mendicant orders (i.e., Augustinians, Carmelites, Dominicans, and Franciscans). Friars differ from monks because they live out the evangelical counsels in service to society, rather than through cloistered asceticism. In contrast, monks live in a self-sufficient community, whereas friars work among laypeople and are often supported by donations or other charitable support.

Cloistered Nun: A nun has similar duties to a monk but is a woman who is dedicated to God. Cloistered nuns are contemplative nuns who spend their lives in prayer and sacrifice. They remain at their monastery. They live away from the world to be closer to God. They have little contact with anyone in the outside world, so they may freely devote their attention to God. They serve the Church and the world at large in a supernatural way that is often unseen, unnoticed, and sadly underappreciated. A group of cloistered nuns is governed by an abbess, who is elected to this office based on the specifics of Church law and the order’s rule. A Rite of Benediction of the Abbess is administered by the bishop.

Active Nun: Active nuns also live in community, but they work in the world and directly help others in a physical way. They may work at Catholic schools, hospitals, or nursing homes. They also work with the poor and sometimes they teach. They live an active mission to serve others and to pray. They are not cloistered and may be around other people. One example is the Little Sisters of the Poor.

Other Groups in the Church

Hermits: Hermits live alone in silence and solitude. They devote their lives away from the world to be totally committed to God. Being a hermit is a unique vocation and is usually more difficult than living in community. St. Paul of Thebes, born in 229 AD, was the first to live as a hermit. Along with St. Anthony of Egypt, they are two of the greatest examples of hermits in the Church’s history. Anchorites are usually cited as a type of hermit; but unlike hermits, anchorites were required to take a vow of stability of place. An anchoress is a female anchorite.

Third Order: A Third Order is connected to a religious order, allowing laypeople to be spiritually part of the religious order without having to take vows. These lay members, called tertiaries, live the spirituality of the order and follow a Rule of Life that is adapted for the order’s lay members. Tertiaries may marry and have a family. Tertiaries make special promises to live in a holy way but do not take vows. Franciscans, Carmelites, and Dominicans all have Third Orders.

The Necessity of Religious Life

It has correctly been observed that religious are like the “power cells” of the Church. They dedicate their lives in complete sacrifice to God, loving Him with all their strength. They also pray unceasingly to God on behalf of the entire Church. Hence, many graces which the world receives come through the intercessory role of religious.

Since this is hidden and supernatural, people in the world tend to ignore or discount their impact. Yet, every major reform of the Church is heavily indebted to the efforts of religious – be it the Desert Monks of the 3rd and 4th centuries, the Benedictines and Irish Monks in the so-called ‘Dark Ages,’ the Cluniacs in the 10th century, Cistercians in the 12th, Franciscans and Dominicans in the 13th, or the Jesuits and Carmelites in the 16th.

The strength of religious life is like a barometer for the rest of the Church. If there are many holy religious vocations, then the Church is healthy and transforming the world. When religious life wanes, grows weak, becomes lethargic, or abandons its saintly founder’s charism, then it grows small in number and the Church becomes worldly, weak, and diseased. The Church in these times will not experience a true reform and renewal until religious life is once again strong and vibrant.[3]

[1] A thorough and excellent explanation of the Ten Commandments can be found in The Catechism Explained, A Practical Manual, by Fathers Francis Spirago and Richard Clarke (originally printed in 1899 with a revision in 1921 by Benziger Brothers, and re-printed by TAN in 1993).

[2] Some of these terms are often confused or used inexactly in common Catholic parlance. For example, a visitor to Quito, Ecuador quickly learns that “convents” are religious houses – be it for men or women – that are active religious orders – that is, they have regular interaction with the laity. On the other hand, “monasteries” are for more cloistered or contemplative orders – be they for men or for women. In the USA, we tend to think of ‘convents’ as houses of female religious only, but that is not how the term is used throughout the Catholic world.

[3] It is a sad commentary on the Church after the Second Vatican Council that religious life has virtually been decimated. Many religious men and women abandoned their vocations in the 1960s and 1970s. Nearly every religious order changed and diluted its constitutions, and many have neglected the spirit of their founders. Today, few young people seriously consider a vocation to the religious life and evangelical counsels. It is only among orders that remain faithful to their Catholic identity and those in ‘traditional’ groups that we are seeing any growth in religious vocations. Is this not perhaps one of the clearest signs from God we have today?