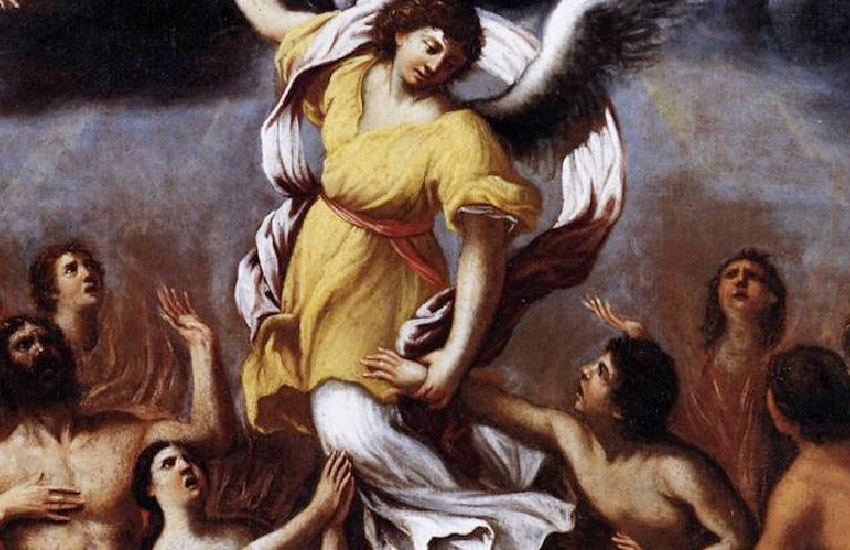 Gain Suffrages for the Poor Souls Through the Rosary

“If they have died repentant for their sins and having love of God, but have not made satisfaction for things they have done or omitted by fruits worthy of penance, then their souls, after death, are cleansed by the punishment of Purgatory; also … the suffrages of the faithful still living are efficacious in bringing them relief from such punishment, namely the Sacrifice of the Mass, prayers and almsgiving and other works of piety which, in accordance with the designation of the Church, are customarily offered by the faithful for each other.” Council of Florence (1438-1443)

Connected with the doctrine of Purgatory, ‘suffrages’ is a term few modern Catholics can easily define. What is a suffrage? Father John Hardon’s Modern Catholic Dictionary defines it as: “The prayers prescribed or promised for specific intentions. More particularly, suffrages are the Masses, prayers, or acts of piety offered for the repose of the souls of the faithful departed.”

Suffrages are the prayers, Rosaries, and Masses that we offer for the souls in Purgatory. This is something that we can do at all times – and should do – as it is one of the most charitable acts that we can do. To give to the hungry or counsel the doubtful or clothe the naked are all very worthwhile. But in all of these, we can receive praise from the person we are helping. The dead, however, cannot monetarily reward us for our efforts. To give our merits for the souls in Purgatory is truly to do work with no prospect of a reward in this life[1].

Offering up the Rosary for the Poor Souls

Suffrages are intimately connected with the Message of Our Lady of Fatima. While we are all aware of our Blessed Mother’s plea to offer prayers for the conversion of poor sinners, She also repeatedly asked for the Rosary to be offered. Along with the Holy Sacrifice of the Mass, there is nothing else of more benefit we can do for the Poor Souls than offering the Rosary for them while in the state of grace ourselves. The following is taken from Manual of the Purgatorian Society:

“St. Dominic declares that the redemption of the holy souls from Purgatory is one of the principal effects of the Rosary. The Venerable Alanus[2] writes that many of the brethren had appeared to them whilst reciting the Rosary and had declared that next to the Holy Sacrifice of the Mass there was no more powerful means than the Rosary to help the suffering souls.

“Also, that numerous souls were daily released thereby, who otherwise would have been obliged to remain there for years. St. Alphonsus Liguori therefore says: ‘If we wish to be of material assistance to the souls in Purgatory, we must always recommend them in our prayers to the Blessed Virgin Mary, and especially offer the holy Rosary for them.’ Let us then frequently and with devotion recite the Rosary, which is so pleasing to our Blessed Mother, recommended most especially by the Holy Church, discloses to us a rich source of grace, and is so efficacious in relieving the suffering souls and opening Heaven to them.

“Should our labor prevent us from reciting the entire Rosary [all fifteen mysteries] every day, let us, at least, say it in part [five mysteries]. This simple homage to the Queen of Heaven will draw down great blessings upon us, and the holy souls will be wonderfully consoled and relieved, if this devotion be offered in their behalf.”

Lent As a Time to Merit for the Poor Souls

As we know by faith, the souls of the suffering in Purgatory can benefit from the prayers and sacrifices of the souls on earth who pray and make reparation while in the state of grace. During this Lent, what will you do for the souls of our brothers and sisters in Purgatory who suffer because of their sins?

They cannot pray for themselves, but you can free them from their sorrows by making reparation for their sins. And since Lent is founded on growing in charity by the threefold means of prayer, fasting, and almsgiving, gaining indulgences for the Poor Souls is something we should be doing. You can gain an indulgence every day by praying the Rosary in a church or oratory or by reciting it as a family, a religious community, or a pious association.[3]

Through Our Lady’s intercession, may these souls be freed of their pains and see the Lord soon in all His celestial glory.

[1] To “Pray for the Living and the Dead” is one of the seven Spiritual Works of Mercy. We do well to always remember that the Spiritual Works of Mercy are of even greater importance than the Corporal Works of Mercy because their end is the salvation of the soul, whereas the latter’s end is the preservation of the body. The world does not recognize this. In fact, all too many “do-gooders” and social justice advocates speak as if they promote some of the corporal works but neglect, nay even ridicule, the spiritual works. This is, in fact, counterproductive. As Catholics who have faith in God, we must always advance both and keep their proper priority in right order.

[2] Blessed Alan de la Roche (1428-1475) is often known as the second founder of the Rosary Confraternity after St. Dominic. The Rosary had fallen into lamentable disuse after the great preaching of the Dominican founder and defeat of the Albigensians. Europe then suffered the Black Plague, the Avignon Captivity of the Papacy, the Hundred Years War, invasions from the Muslims, and the Great Western Schism. Which pious soul does not realize that faithful recitation of the Holy Rosary by the baptized could have prevented ALL of these evils? Although Blessed Alan was a renowned Dominican theologian, Our Lord appeared to him and chastised him for ‘crucifying Him again’ because he was failing to promote the Holy Rosary. Our Lady would also later appear to Bl. Alan. He worked unceasingly to promote the Rosary, and we are greatly indebted to him for its revitalization and popularization throughout Christendom. (He is also known as Bl. Alanus de Rupe.)

[3] All the usual conditions for an indulgence apply, including the intent to gain the indulgence, being in the state of grace, and praying for the pope’s intentions. It is to gain this indulgence that the pious custom developed of praying an Our Father, Hail Mary, and Glory Be at the end of the Rosary for the pope. We recommend praying for the traditional intentions of the papacy. And of course, at Fatima, Our Blessed Mother exhorted us all to pray for the Pope, and St. Jacinta Marto dedicated her life to praying very much for the Holy Father. Thus, these additional pious prayers at the ‘tail end’ of the Rosary help one live the Message of Fatima.

[4] Using https://divinumofficium.com/cgi-bin/horas/officium.pl, choose “defunctorum” in the bottom right box. Then you will have the option of either Matins, Lauds, or Vespers. I suggest praying Lauds if you visit the cemetery in the morning or Vespers if it is an evening visit.