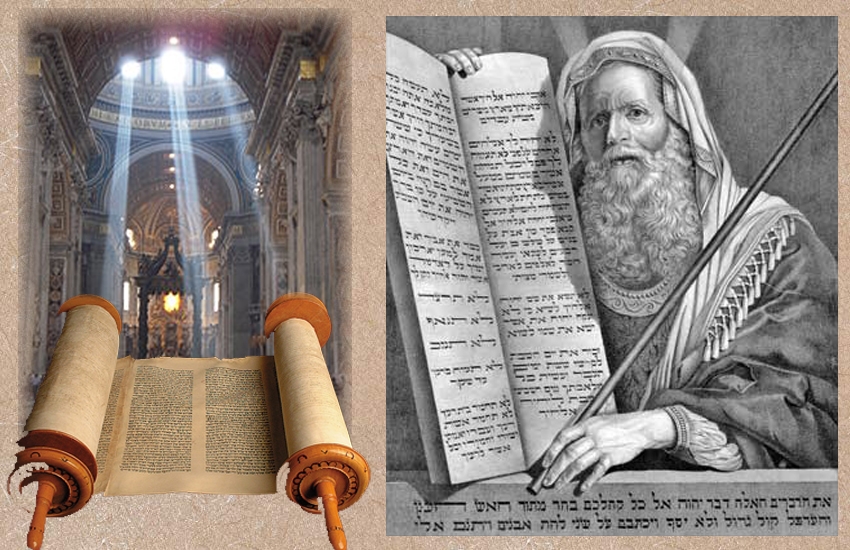 Part 5 – Basic Catechism on the Bible

And God said again to Moses: Thus shalt thou say to the children of Israel: The Lord God of your fathers, the God of Abraham, the God of Isaac, and the God of Jacob, hath sent me to you. (Exodus 3:15)

When I began teaching Catholic Secondary School religion, I was oblivious to the modernist and heterodox underpinnings of the curriculum documents. This applies to the Catholic system in which I work. If your children attend Catholic schools, this may not apply to all, and hopefully you have found one of the few faithful schools. In my case, it is consistently an uphill battle against error on many levels. I confronted this inconvenient truth in my first week a few years ago. In our grade nine and ten curriculum expectations we are to cover various parts of the Bible, specifically the Books of Moses (first five books) and the Gospels. Naively, I displayed a resource from the school collection for my pupils to copy into their notebooks. As I was reading through the document, I was disheartened to find a skeptical and almost unbelieving theme throughout. Needless to say, we have not used that resource in my classroom since.

Since then I have noticed a prevalent error surrounding the notion of Mosaic authorship of the first five books of the Bible. These books are commonly called the Books of Moses, the Pentateuch and some refer to them as the Torah.

Previously I wrote of the importance of the pre-Vatican II judgments of the Pontifical Biblical Commission, the PBC. As with the traditional doctrine of Creation, the traditional authorship of the Books of Moses was also settled by the PBC. Common in modernist-inspired scholarship today is the notion that Moses did not actually write or compile the first five books of the Bible. Modernist scholars claim that the books were actually written during the Babylonian Captivity of the Jews, some 1000 years after Moses. The claim is that the tradition was handed down orally, and Moses was labeled as the traditional author by the Jewish tradition as a pious homage to him. Not only is this view condescending to the Old Covenant patrimony of our faith, but it is also wrong.

The PBC clarified a series of questions regarding Mosaic authorship,[1] and they concluded four vital truths.

In my article on the correct interpretation of Genesis, we see the Church in her wisdom governs strictly when approaching Scripture. Furthermore, we need not worry about textual errors or translation issues, as the Latin Vulgate is assuredly free from error. It is often said that the Church has seldom declared infallible interpretations of Scripture. This is true, but also misleading. The Church need not declare on most matters explicitly when there are strict confines that implicitly render it difficult to interpret freely.

In the case of Mosaic authorship, the Church has always held the Great Prophet to be the primary author of the Books of Moses. Furthermore, as seen in the PBC answers, the clarifications given by the Church are nuanced and helpful. Of course it is possible that after Moses’ death a conclusion of his life was written. Also, if Moses were to consult the tradition and writings available to him, he did so to assure the history to be in accordance with the venerable wisdom and experience handed-on by the patriarchs and ancient ancestors of God’s Chosen People.

Denial of the true Mosaic authorship is yet another modernist attempt to delegitimize the truth of the Old Testament. In the mind of a modernist, one can not allow the first five books to be true, as it further cements the Church in contradiction with the passing wisdom of the world. If Moses be denied as author, then it is far easier to justify denial of the content. Hence, faithful Catholics must hold firm to the truth of Mosaic authorship, as it is foundational in reading the Scriptures as was intended by God.

Our Lord said in reproach of the Pharisees: “Think not that I will accuse you to the Father. There is one that accuseth you, Moses, in whom you trust. For if you did believe Moses, you would perhaps believe me also; for he wrote of me. But if you do not believe his writings, how will you believe my words?”  (John 5:45-47)

As is so often the case with faulty modern scholarship, we must use our common sense as a guide. Jesus Christ, the King of Heaven and Earth, stated clearly that Moses wrote of Him and that we must believe Moses in order to believe Him. If you are presented with conflicting information about the authorship of Scripture, perhaps you should refer that person to Our Lord and Savior. It would be a sight to behold, a prideful man disputing with God about His own words!

A similar atmosphere of error is common amongst scholarship on the Gospels. We will address this topic in the next article of the series.

Editor’s Note: A popular theory, mind you one that is unproven and assuredly false, is that at least four major independent sources were used by redactors at the time of the Babylonian Captivity to compile the Pentateuch. Scholars have named them Yahwist, Elohist, Deuteronomist and Priestly, and abbreviate them Y, E, D, and P, respectively. Academics then spend countless hours and gallons of ink arguing which particular passages came from this or that source. Dissertations are argued, articles written, books printed, and conferences held, all of which generate a continual source of revenue, especially for the parties most on the “cutting-edge”. This ‘scholarly criticism’ and ‘process of reconstruction’ provides an illusion of great learned intelligence, when it is in fact quite ridiculous. One could employ the same literary tools and methods to argue that there are various sources for numerous works we know to have been written by one author, say St. Augustine, St. Thomas Aquinas, or even modern writers like Charles Dickens and William Faulkner. In fact, it would be quite easy for you or I to write a literary work and have it be interpreted five-hundred years from now as having come from four different sources.

It is important to note that this kind of scholarship was all pioneered by Protestants who did not accept the Catholic Church’s teaching on the inspiration and inerrancy of Sacred Scripture. Sadly, many Catholic scholars began to follow in the footsteps of these Protestants! Following Vatican II, this methodology became vogue and those who strove to defend tradition and magisterial authority were usually ridiculed, silenced, and persecuted. It is terrible to note that nearly all seminaries now teach this type of protestantized biblical scholarship. Thus, one should not be surprised if a local parish priest summarily dismisses the notion of Mosaic authorship and instead waxes on about the Yahwist, Elohist, Deuteronomist and Priestly sources of the Pentateuch.

[1] The ‘Replies of the Pontifical Biblical Commission on Questions of Sacred Scripture’ are contained in the Acta Sedis Sanctæe and the Acta Apostolicæ Sedis. A translation into English can be found in The Scripture Documents edited by Dean P. Béchard, S.J. (The Liturgical Press, Collegeville, MN 2002). Certain relevant portions of this translation are reproduced in footnotes 2-5. Note: Those interested in reading more may avail themselves of a translation by E. F. Sutcliffe, S.J. located on-line here.

[2] Question: Whether the arguments amassed by critics to impugn the Mosaic authenticity of the sacred books designated by the name Pentateuch are of sufficient weight, notwithstanding the very many evidences to the contrary contained in both Testaments, taken collectively, the persistent agreement of the Jewish people, the constant tradition of the Church, and internal arguments derived from the text itself, to justify the statement that these books have not Moses for their author but have been compiled from sources for the most part posterior to the time of Moses.
Answer: In the negative.

[3] Question: Whether the Mosaic authenticity of the Pentateuch necessarily postulates such a redaction of the whole work as to render it absolutely imperative to maintain that Moses wrote with his own hand or dictated to amanuenses [scribes, assistants] all and everything contained in it; or whether it is possible to admit the hypothesis of those who think that he entrusted the composition of the work itself, conceived by himself under the influence of divine inspiration, to some other person or persons, but in such a manner that they render faithfully his own thoughts, wrote nothing contrary to his will, and omitted nothing; and that the work thus produced, approved by Moses as the principal and inspired author, was made public under his name.
Answer: In the negative to the first part, in the affirmative to the second part.

[4] Question: Whether it may be granted, without prejudice to the Mosaic authenticity of the Pentateuch, that Moses employed sources in the production of his work, i.e., written documents or oral traditions, from which, to suit his special purpose and under the influence of divine inspiration, he selected some things and inserted them in his work, either literally or in substance, summarized or amplified.
Answer: In the affirmative.

[5] Question: Whether, granted the substantial Mosaic authenticity and the integrity of the Pentateuch, it may be admitted that in the long course of centuries some modifications have been introduced into the work, such as additions after the death of Moses, either appended by an inspired author or inserted into the text as glosses and explanations; certain words and forms translated from the ancient language to a more recent language, and finally, faulty readings to be ascribed to the error of amanuenses, concerning which it is lawful to investigate and judge according to the laws of criticism.
Answer: In the affirmative, subject to the judgment of the Church.