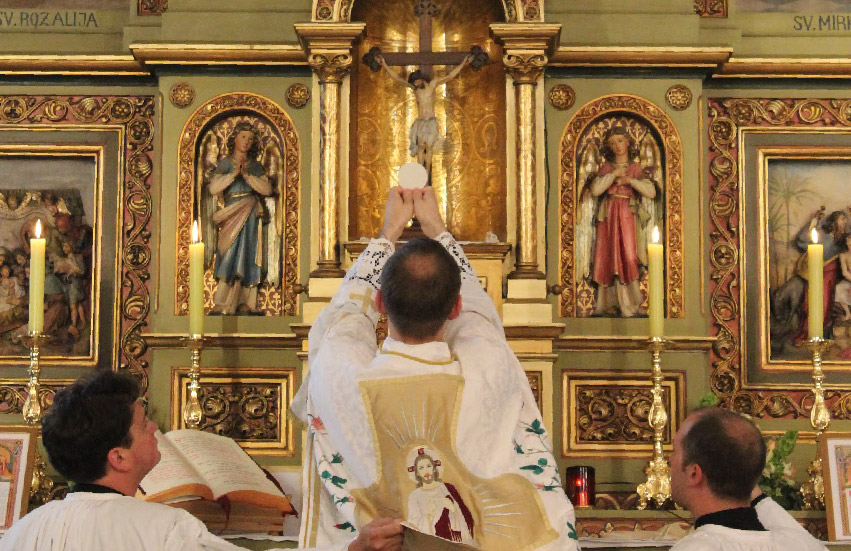 Editor’s Note: The simplest answer is that, YES, Catholics may attend Mass and receive Holy Communion at the chapels of the Society of St. Pius X without incurring any penalty, stigma or sin. As this is an involved topic, one article would be too long to cover this subject matter. Hence we will be posting these articles as a series over numerous days. We will cover such issues as schism, “full communion,” valid and licit sacraments, true obedience, Vatican II, excommunication and more. If you are interested in these topics, please read on!

Part I – The SSPX Is Not in Schism

With the recent coronavirus problem, many faithful Catholics are faced with a dilemma in their parish. In some cases there are restrictions being imposed on the functionality of the liturgy that make it virtually impossible for someone to attend their usual Mass in good conscience. Everything from registering for attendance, to being required to wear masks, to banning music, to great limitations in seating capacity, and even suspension of receiving Holy Communion reverently (kneeling and on the tongue) have been imposed nearly everywhere.

As a result, many are wondering if they may attend their local Society of Saint Pius X chapel. Here at The Fatima Center, we have worked with good priests of the SSPX in the past, so perhaps it would be helpful to clarify their situation to enable our readers to make a more informed decision.

Admittedly, the Internet is loaded with a range of dissenting opinions. Even if you ask your average parish priest, or even priests who offer the Traditional Latin Mass, you will encounter an array of answers. I have personally heard from various priests everything from: “They are like the Lutherans,” “They are schismatic like the Orthodox,” “Their Masses are fine, but I wouldn’t recommend them,” “It is no issue; in fact, [Archbishop] Lefebvre was probably a Saint,” “Yes, I encourage you to attend there,” and everything in-between. Some have called the SSPX a “cult,” others have accused them of acting like the only ark of salvation, and others have said they don’t accept any popes since St. Pius X. Many of these claims are outright calumnies. Clearly, it is impossible for all these claims – some actually conflicting with others – to be true all at the same time; therefore, clarity is needed.

Here is a collection of frequently asked questions which I think cover virtually any quandary or objection someone may put forth about the Priestly Society of Saint Pius X. (Please note, these are my own words and should not be seen as an ‘official’ statement by any other entity.)

What is the SSPX?

The SSPX is a priestly fraternity canonically erected by Archbishop Marcel Lefebvre for the purpose of maintaining and propagating the Traditions of the Catholic Faith and preserving the holy priesthood by forming and supporting good priests.

Are they in schism?

No. This is an easy and clear-cut answer.[1] Those who respond otherwise are grossly misinformed. In fact, even if the excommunication of their four bishops in 1988 (more on that later) were taken at face value, they have now been authoritatively made null and void.[2] Moreover, those excommunications never applied to the hundreds of priests in the Society or to the faithful who receive the sacraments or pastoral care from them.

Being in schism is a formal term.[3] In essence, it means one rejects the truth that the pope has universal authority over the Church (or that a bishop has authority over his diocese). Practically, this means a schismatic group sets up or adheres to their own authorities, denying the ecclesial jurisdiction and even canonical law of the Catholic Church. Liturgically, it means they will not pray for the pope or the local bishop in the Roman Canon. The SSPX is not guilty of these schismatic acts.

Now even excommunication is not sufficient for one to be in schism. For example, one could be personally excommunicated for some crime, yet one is not thereby placed under the authority of some other church or religious group. Only the proper authority can make such a claim; and Cardinal Castrillón Hoyos, while president of the Pontifical Commission Ecclesia Dei (the papal-mandated Vatican congregation dealing with the SSPX), made it clear they are not in schism. He did this more than once.[4]

It is well known that Cardinal Castrillón Hoyos said in an interview, “[I]t cannot be said in correct, exact, and precise terms that there is a schism.”[5] Unfortunately, this verbiage can be confusing on account of the negative phrasing. The same thing said with positive phrasing would be: ‘To say the SSPX is in schism is incorrect, inexact and imprecise.’

Being in schism is a binary matter – you either are in schism or you are not. There is no in-between. Our Lord tells us, “But let your speech be yea, yea: no, no: and that which is over and above these, is of evil” (Matthew 5:37). Cardinal Castrillón Hoyos did affirm, “To say the SSPX is in schism is incorrect.” Any other answer is a foggy attempt to present what is in reality an imperfect and difficult situation as something other than it is.

Furthermore, even Pope Benedict, when he was Cardinal Ratzinger, admonished a bishop in Hawaii in 1991 for wrongly excommunicating families from his diocese who had their children confirmed by the SSPX.[6] Benedict made it clear that there was no schism.[7]

They may not be in schism, but aren’t they “schismatic”?

When someone makes this assertion, it seems to be playing with words. A serious problem with our manner of speaking today is imprecision and using terms without properly defining them. (Incidentally, this is a hallmark of modernism and a modus operandi of today’s ecclesial ‘dialogue’.) How is the word “schismatic” being used in such an assertion?

Schism and schismatic should mean the same thing; we simply have a noun and an adjective form of the same word (concept). For example, to say that a breakaway church, like the Russian Orthodox, is “schismatic” is the correct usage.

However, to infer that a group of Catholics are “schismatic” because they have an “attitude” that reflects schism is, in fact, casting a judgment upon the interior life of every single person in that group. As disciples of Christ, we are called to judge objective external acts but we are to refrain from judging the internal spiritual disposition of a soul. In this case, the objective external act is “schism” and the proper Church authority has judged that the SSPX is not in schism. None of us should then presume to judge the “internal attitude” of this or that person in that group, let alone of the entire group at large.

Rather, we should deal with fellow Catholics as St. Thomas Aquinas so eloquently says: “…unless we have evident indications of a person’s wickedness, we ought to deem him good, by interpreting for the best whatever is doubtful about him.”

Some have argued that while the SSPX might not be in formal schism, they are in material schism. We will deal with that more technical issue in the next article of this series.

[1] This is confirmed by Edward Cardinal Cassidy, President Emeritus of the Pontifical Council for Promoting Christian Unity, who declared in an official letter (Prot. N. 2336/94) dated May 3, 1994: “’I would point out at once that the Directory on Ecumenism is not concerned with the Society of St. Pius X. The situation of the members of this Society is an internal matter of the Catholic Church. The Society is not another Church or Ecclesial Community in the meaning used in the Directory.” The Suicide of Altering the Faith in the Liturgy [hereafter, SAFL], p. 166.

[2] The “excommunication” of the four bishops consecrated by Archbishop Marcel Lefebvre and Bishop Antonio de Castro Mayer (of Campos, Brazil) on June 30, 1988, which had been declared by the Congregation for Bishops in a decree dated July 1, 1988, and which the Society of St. Pius X had always contested, was withdrawn by a decree (presented here) mandated by Benedict XVI and issued by the same Congregation on January 21, 2009.

[3] Canon 751 defines schism as the “refusal of submission to the Roman Pontiff or of communion with members of the Church subject to him”. It is not merely a simple refusal of subjection to papal or other ecclesiastical authority, but rather it is a rejection, “an adamant refusal to submit to the Pope or to remain in communion”. (SAFL, pp. 121-122.)

[4] In fact, Cardinal Castrillón Hoyos clarified this three times. In 2005, regarding the 1988 consecrations done without pontifical mandate, he stated that it created a “situation of separation … even if it [the SSPX] was not a formal schism.” (“Rapprochement by unhasty stages, but not too slow either”) Again in 2005, that in a 2004 meeting between Pope Benedict XVI and Bishop Fellay (then Superior General of the SSPX), it was stated, in Castrillón Hoyos words: “It cannot be said in correct, exact, and precise terms that there is a schism. … They are within the Church…” (“They are within the Church”) Then, in 2007, Castrillón Hoyos stated that the SSPX priests and adherents “are not schismatics” because: “It is Lefebrve who has undertaken an illicit Episcopal consecration and therefore performed a schismatic act. It is for this reason that the Bishops consecrated by him have been suspended and excommunicated. The priests and faithful of the society have not been excommunicated.” (“The President of the Ecclesia Dei Commission, Cardinal Hoyos hopes for reconciliation with the Society of St Pius X”). [Cited at https://en.wikipedia.org/wiki/Canonical_situation_of_the_Society_of_Saint_Pius_X#cite_note-20]

[5] This is the second quote cited in the previous footnote.

[6] “On June 28, 1993, the ruling of the Sacred Congregation for the Doctrine of the Faith, communicated that the six individuals in question, adherents and supporters of the Society of St. Pius X, did not perform ‘schismatic acts in the strict sense as they do not constitute the offence of schism; and therefore the Congregation holds that the Decree of May 1, 1991 (the decree of excommunication) lacks foundation and hence validity.’” (SAFL, pp. 165-166.)

[7] There is a hierarchy of authority in the Church. The Pope has supreme and universal authority over every diocese. Thus, if he, or the Vatican congregation to whom he entrusts his authority in a particular matter, says a particular group is not in schism, then a local bishop may not proclaim the opposite.