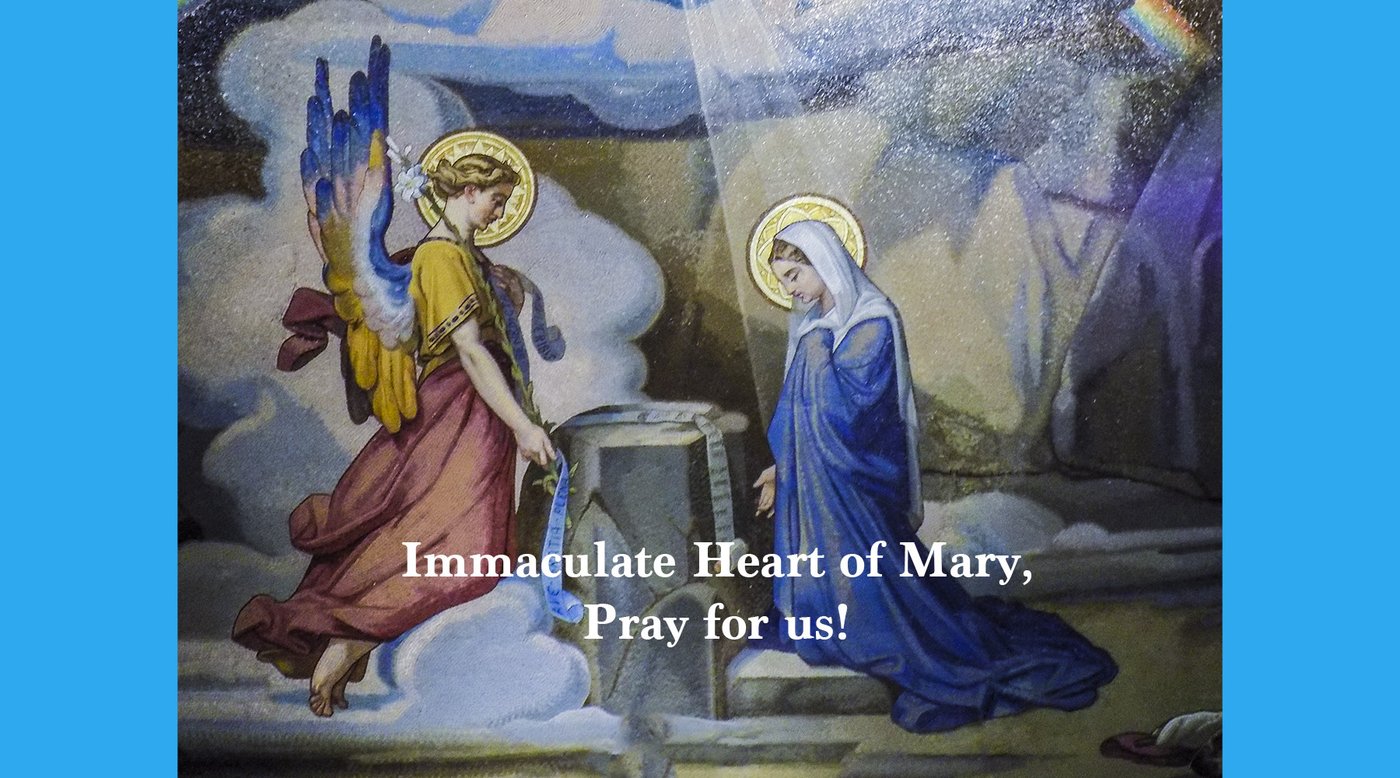 Tomorrow, on First Friday (1 May 2020), The Fatima Center will begin a 54-day Rosary Novena, with its specific intention being the Consecration of Russia to the Immaculate Heart of Mary as requested by Our Lady of Fatima. The Novena will conclude on the Vigil of St. John the Baptist (23 June 2020).

It is only by this Consecration that our world will be granted a period of peace, the conversion of Russia, and the avoidance of greater chastisements – including the prophesied annihilation of nations. This Consecration is also the only way to bring about a great conversion among mankind, and a glorious renewal and flourishing of both the Catholic Church and society as a whole. Consequently, it will also end the current ‘coronavirus chastisement’ and all its associated restrictions.

We hope you join us in faithfully praying this novena.
More information is available here.

Some people also choose to follow a particular method when praying this Novena. There are certain prayers which can be used to begin and conclude the five decades, as well as a brief meditation before each Mystery. This structure also affords a particular place in which the specific intention of the Novena is stated, takes into account our Lady’s cherished title of Queen of the Most Holy Rosary, and ensures that the first three novenas are intentionally offered in petition and the latter three in thanksgiving. These prayers are devotional, not “mandatory.” If you would like to use them, you can download them here.

This powerful novena dates back more than 100 years to a Church-approved apparition of the Blessed Virgin Mary in Naples, Italy. It occurred during the reign of Pope Leo XIII, often known as the “Pope of the Rosary” because he published twelve encyclicals on the Holy Rosary (1883-1898). He never ceased to promote and popularize the daily recitation of Our Lady’s Psalter.

The young daughter of a commander, Fortuna Agrelli, lay close to death. She had been suffering intensely for 13 months from three separate incurable diseases. Prominent physicians had already abandoned hope, but the suffering girl and her faithful family placed all their trust in the Blessed Mother.

They began a novena of Rosaries on February 16, 1884. They persevered in this pious prayer for two weeks with their plea seeming to pass unanswered. Nevertheless, as with the persistent widow in the Gospel (cf. Lk 18:1-8), their undaunted faith coupled with an unrelenting knocking opened the doors of Heaven.

On the third day of March, the Queen of the Most Holy Rosary appeared to the afflicted child in marvelous beauty, sitting on a high throne decorated with flowers. The Infant Jesus was on Her lap. Mother and Child, clad in gold embroidered garments, were accompanied by Saint Dominic and Saint Catherine of Siena. (Under this particular appearance, the Blessed Virgin Mary is frequently venerated by the title of Our Lady of Pompeii.)

Holding a rosary in Her hand, Our Lady looked with motherly compassion upon the suffering maiden, who implored: “Queen of the Holy Rosary, be gracious to me; restore me to health! I have already prayed to Thee in a novena, O Mary, but have not yet experienced Thy aid. I am so anxious to be cured!”

“Child,” responded the Blessed Virgin, “thou hast invoked Me by various titles and hast always obtained favors from Me. Now, since thou hast called Me by that title so pleasing to Me, ‘Queen of the Holy Rosary,’ I can no longer refuse the favor thou dost petition; for this name is most precious and dear to Me. Make three novenas, and thou shalt obtain all.”

The Agrelli family promptly obeyed Our Lady; and upon completing the sixth set of Rosary novenas, Fortuna experienced a miraculous cure.

A Most Powerful Novena

The Queen of the Holy Rosary appeared to Fortuna a second time famously saying, “Whoever desires to obtain favors from Me should make three novenas of the prayers of the Rosary in petition, and three novenas in thanksgiving.”

Thus began this most powerful and Heaven-sent devotion, now known as the 54-day Rosary Novena. It consists of praying five decades of the Rosary each day for 27 consecutive days in petition, followed immediately by five decades each day for 27 consecutive days in thanksgiving – whether you have obtained the favor or not. In this way we foster and strengthen our complete and trustful surrender to the Queen of the Holy Rosary.

After Fortuna was miraculously cured, Pope Leo XIII was so deeply moved by the report of this miracle, wrought through the power of Our Lady’s Holy Rosary, that he indulgenced the novena, and in many of his encyclicals he urged upon all the faithful a strong devotion and love for the Holy Rosary. It was further promoted by Blessed Bartolo Longo at the Shrine dedicated to Our Lady of Pompeii. (The story of Bartolo Longo is particularly noteworthy for our times because after becoming a satanic priest and avowed enemy of the Catholic Church, Our Lady granted him an amazing and inspiring conversion.)

Many miracles have been wrought through this novena, and so it has been called “The Irresistible Novena” and “The Miracle Novena.” It is known as a “laborious novena” because it requires much more perseverance than other novenas. Yet for this reason it is also known as a “novena of great faith and love.” I myself have prayed it several times and on each occasion my prayers have been answered – though not always when or how I expected.

Our Lady of Fatima and the 54-day Rosary Novena

We also do well to remember that when the child seers at Fatima asked Our Lady Her name, She responded by saying “Our Lady of the Rosary,” which is a close variation of the title by which She is invoked in this particular Novena. Thus, Our Lady Herself established a profound connection between Her apparition to Fortuna Agrelli and Her apparitions to Lucia dos Santos and her cousins, Saints Francisco and Jacinta Marto.

Our Lady also appeared to Fortuna just a few months before Pope Leo XIII’s famous vision of Our Lord granting satan more power to try and destroy His Church. He had this vision on October 13th 1884, precisely 33 years before the Miracle of the Sun. It was after this terrifying vision that Pope Leo penned a prayer to St. Michael the Archangel1 and requested that certain prayers be offered by all the faithful after every Low Mass.[1]

Most Catholics know that Our Lady of Fatima requested that all Catholics pray five decades of the Rosary every day. If we live according to the Message of Fatima and pray a Rosary every day, then it is ‘second nature’ to make a 54-day Rosary Novena, because we continue our normal prayer routine and simply fix the same intention throughout this period.

On the other hand, for those who are not accustomed to praying the Rosary daily – as Our Lady repeatedly and insistently requested at Fatima – there is perhaps no better way to establish this habit than by praying a 54-day Rosary Novena. Here I add my personal testimony.

I grew up in a family that was very devoted to Our Lady of Fatima and we prayed the family Rosary often (though not every evening). I attended a seminary for several years, earned a Master’s Degree in Theology, spent a year at a Cistercian Monastery, began to attend the Traditional Latin Mass – and still, I had not developed the habit of praying the Rosary daily. I got married and began to have children, we heard numerous sermons on how important it is to pray the Rosary every day – and still, we did not pray the Rosary consistently.

It was not until our family experienced a terrible crisis and we sought to pray a 54-day Rosary Novena that we developed the firm and unshakable habit of doing what Our Lady requested: pray the Rosary every day. Incidentally, our intention was answered. There was still plenty of suffering, yet the ‘answer’ was far more wondrous than we ever imagined.

With God’s grace supplying for our weaknesses, we offer these fifty-four Rosaries with as much faith, hope, and charity as possible, knowing that Our Lady will intercede on our behalf, that She is all powerful with God, and that Our Heavenly Father will give good things to His children who thus ask (cf. Mt 7:7-11).

[1] Thisprayer is a longer version than the one many Catholics have memorized. It was originally published in the Roman Raccolta of July 23, 1898, and a supplement approved July 31, 1902. You can find it in the Raccolta published by Loreto Press or at numerous websites by searching for the “original” or “long” version of Pope Leo’s St. Michael Prayer.