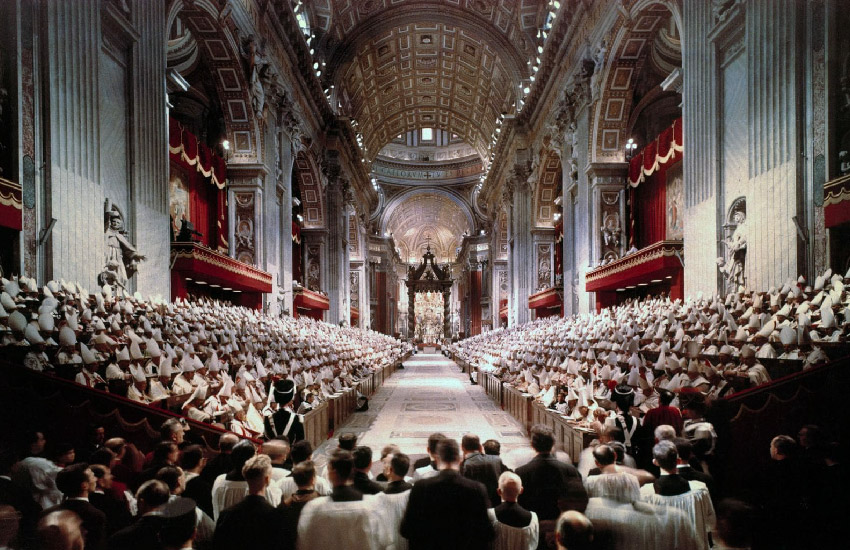 Kalb on Vatican II: Exactly so.

Why has the Second Vatican Council been such a radically disruptive event in the life of the Church, such that Archbishop Viganò proposes that we simply forget it, leave it behind, and bring an end to the otherwise endless debates over what the Council meant to teach between 1962 and 1965 and how exactly that teaching can be reconciled with what the Church has always taught?

The always insightful James Kalb, the lawyer and scholar whose book The Tyranny of Liberalism is a must read for the thoughtful, provides what I believe to be the only reasonable answer to the question in this piece over at Crisis magazine.

Kalb proposes that the answer to the question, in a word, is dicta—the legal term for statements in a judicial opinion that are not necessary for the court’s decision but are merely observations not in themselves binding on the parties to the dispute.

As Kalb explains, by analogy the documents of Vatican II are loaded with dicta, none of which were necessary to any binding statement of Catholic doctrine or dogma. This Council, unlike any before it, wanted to say a lot of things about a lot of subjects in the form of commentaries on this or that rather than simple declarative statements of what the Church teaches and what the faithful must hold—the subject matter of every ecumenical council before Vatican II.

And yet, says Kalb, for all this verbiage “the major documents don’t give us much that’s concrete. They enact no canons, pronounce no anathemas, decide no particular cases, and adopt no new doctrinal definitions. Instead, they present lengthy discussions of the Church and its relation to the world that are sometimes eloquent and sometimes confusing… they’re dicta.”

As such, the Vatican II documents are by and large “not the sort of thing [a lawyer] would customarily view as binding—however much he might respect the source. Even when they deal with something fairly concrete, like the reform of the liturgy or religious life, they leave the specifics to future decision.” But, for the same reason a lawyer would view the documents as non-binding dicta, so would a thoughtful member of the laity. For the most remarkable—but little known—fact about Vatican II is that its documents do not actually require a Catholic to believe or to do a single thing he was not obliged to believe or to do before the Council.

As Kalb notes, even where the Council documents, however infrequently, venture beyond the realm of dicta into language that might appear binding in some way, “it’s not clear what they bind us to. The Council tells us that people have the right to religious freedom ‘within due limits.’ But what limits are due? They make some general remarks, and that’s it. The Council shows us that we can say favorable things about the modern age and other religions. That’s true, but we can also say not-so-favorable things, and the prudence of one statement or another isn’t something on which definitive guidance is possible.”

The result, Kalb concludes, is that “[h]alf a century and more after the Council we have no accepted understanding of what it did. Instead, we have those who support a ‘hermeneutic of continuity’ and those who support a ‘hermeneutic of rupture,’ with the latter divided between those who reject the traditional Church and those who reject the Council. Worse, there’s a crisis in the Church—at least partially stemming from the Council—regarding doctrine, discipline, and unity, and a radical decline in Catholic adherence in the very region [Europe] that most influenced the documents.”

So, why is this not the very definition of a Council so problematic it is best forgotten? And if it were forgotten, would the Church suffer any harm in the least? If so, what harm? That there is no concrete answer to such questions is yet another demonstration of why the Second Vatican Council ought to join the Second Council of Constantinople in the annals of ecumenical councils about which the less said the better.