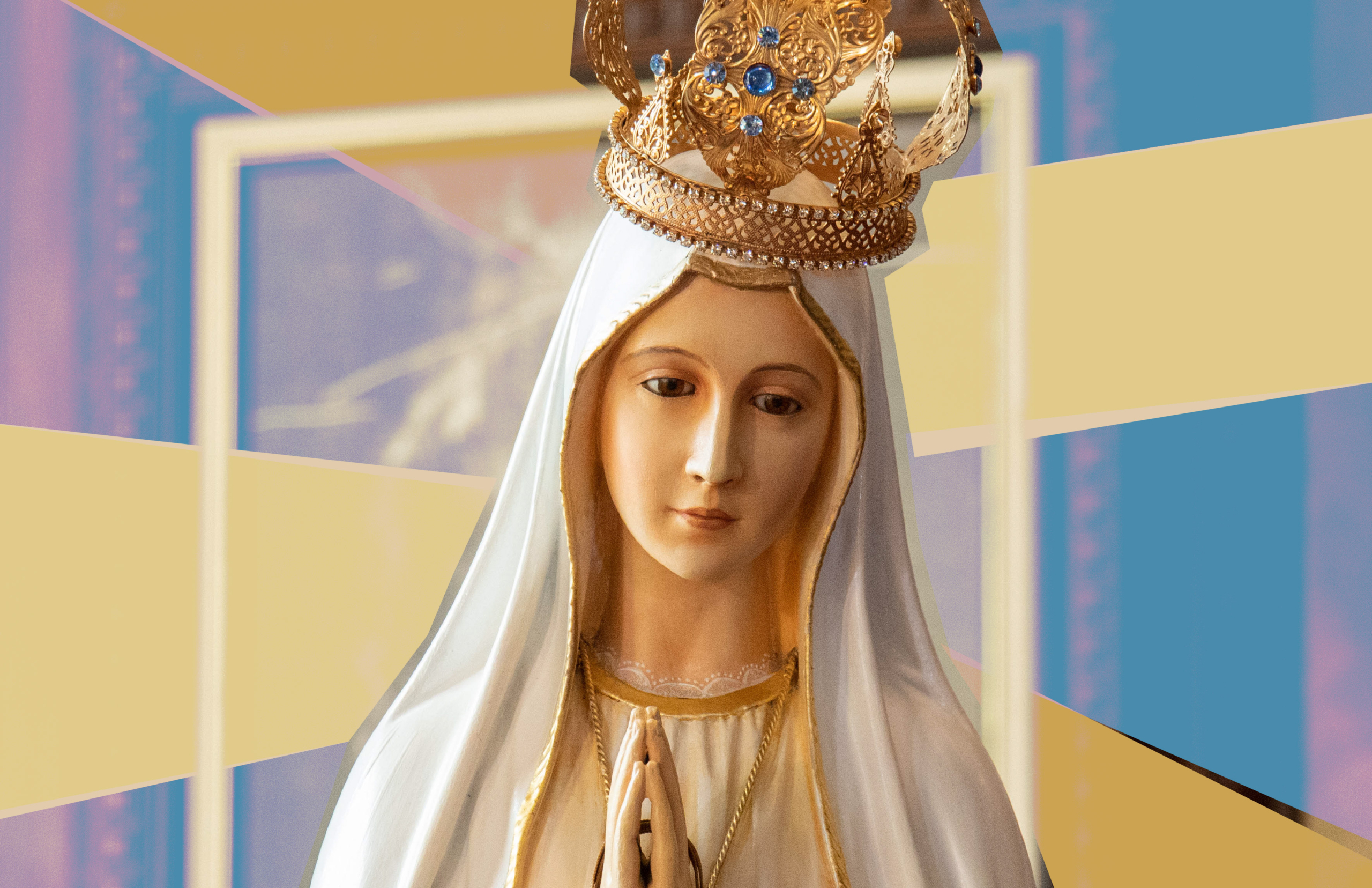 It is All About Fatima

THESE ARE UNCERTAIN TIMES

This year and especially these last few days have been admittedly some of the most stressful moments for Catholics in recent history. Perhaps not since the time of the great wars or communist dictatorships have we lived under a shroud of such uncertainty. As I write this, the United States’ Presidential Election is still undecided, and even if a winner is declared soon, it seems like there will be weeks — if not months — of legal activity surrounding allegations of fraud, or perhaps even violence as a result of impending civil unrest.

Throughout the roughly six months leading up to the onset of the coronavirus lockdowns, I kept saying to my wife, “something’s gotta give, things are too crazy in the Church and in the world to be sustainable.” I do not pretend that this was some sort of divinely-inspired intuition, but rather just an observation of the facts.

AS GOES THE CHURCH, SO GOES THE WORLD

The great corruption in the Church necessarily means that the world will suffer as a result. All grace flows from the altar, and if the Church is stifling the font of grace — either through less efficacious offerings of the Holy Sacrifice[1] or heretical teaching — then the world will be like an arid desert, thirsting for truth and sanctifying grace.

All Catholics must understand this fundamental principle of Catholic truth. Far too many ‘practicing’ Catholics (meaning, they normally go to Mass on Sunday) seem far too unconcerned with this reality. Far too many Catholics don’t seem to connect the dots between the problems we recognize in the Church (moral depravity, silent leaders, unfaithful teaching, etc.) and the deficiencies in the Sacred Liturgy. This does require us to see the world with the eyes of faith — which is the only way Catholics should see it

We have long suffered in the Church, and our moral fabric in society is at an all-time low. Thus, is it any wonder that we live in a world with such diabolical disorientation?

FATIMA IS THE ANSWER

Over the past two years, I have begun to discover the depth of the Message of Fatima. For some time, even before this discovery, I had been praying for the intercession of Our Lady of Fatima, but it was nothing more than a pious invocation of Our Lady. Of course, it is good to invoke the name of Our Lady, but I did not understand the Message or the controversy surrounding the failed attempts to truly consecrate Russia to the Immaculate Heart of Mary, or the hiding of the Third Secret.

But, as I continued to be “red pilled” on the truth about Fatima, almost entirely due to the efforts of The Fatima Center, I realized that Fatima is the key to everything at this point in time.

WE ALREADY LIVE UNDER THE ERRORS OF RUSSIA

Of course, when we consider the Errors of Russia we think of the error of Soviet Communism. Like most people, I long considered communism to be a largely economic endeavor, and that as long as we lived in a society that favored capitalism, or had relative economic liberty, then that must be proof that we do not live under actual communism.

But, as I began to listen to sermons and conferences by Father Chad Ripperger, a well-known priest, author, and exorcist, talks from Fatima Center conferences, and sermons from other faithful and courageous priests, I came to understand that the financial aspect of communism is but one of the tools in the arsenal of the ideology. Ultimately, communism is about controlling people in a way that leads them to reject God, with the final end of sending them to hell. It is an idolatry of the state, an exaltation of man, and a rejection of saving truth.

Take a moment to consider what the various communist states did and still do to their citizens. In order to destroy the Church, they would corrupt the priesthood,[2] destroy marriage, promote sterilization and abortion, and promote heretical ideas through state-run institutions so as to corrupt the minds of the youth. Do these facts not perfectly fit our current society?

In communist Russia it was legal to go to church, after a persecution, but only a small number of people would attend. Is Church attendance any different now in our “free” society? The churches were subject to the political orthodoxy of the state, and therefore watered down their message. Is that functionally any different than our reality? Educational institutions were dominated by an atheistic, materialist and secular bias that was outright antagonistic towards any message from the Faith. Don’t our institutions of ‘higher learning’ mirror this? Family life was strongly controlled by the state through schools, health systems, and government mandates. Is that different from our society?

Communism is ultimately an utterly materialist philosophy. Thus, a large emphasis is placed on the equity of material things. What is the main message of most politicians and the main desire of most of the electorate? To either have more high-paying jobs, or to have material comforts provided by the state.

OUR LADY SPEAKS WITH PRECISION

Furthermore, it is important to note that the ‘Errors of Russia’ are not a one-to-one correlation with communism. Our Lady could have used the word ‘communism’ but She did not. And She does not err in Her words. She also did not say these errors would originate in Russia. Rather, the context of Our Lady’s words are clear: errors will spread from Russia to the rest of the world, regardless of where they originated.

The originator of communism as a materialist philosophy and economic model is largely credited to Karl Marx, a German. In previous series, articles, and videos, I have explained how evolutionism is also an ‘error of Russia,’ even though its founders are generally seen as Charles Darwin, an Englishman, regarding human biological origins; Father Georges Lemaître, a Belgian Catholic priest, as regards cosmological origins; and Teilhard de Chardin, a French Jesuit, as regards theological evolution.

Finally, many have argued that the first (and fundamental) ‘error of Russia’ is the rejection of the Papacy. When Russia first became Catholic under Vladimir the Great (988 A.D.), they joined under the Patriarchate of Constantinople. Thus, when the East split into schism (1054 A.D.) Russia went into schism as well. However, when the East agreed to return at the Council of Florence (15th century), the Russian Orthodox refused and claimed the Patriarch of Moscow was equal in authority and independent of the Patriarch of Constantinople and the Patriarch of Rome (the Pope). The history of the East is replete with schism after schism, going all the way back to the Council of Nicea (325 AD), though after a time they would seek reconciliation with the Holy Father.[3] So rejecting the Papacy is also not an error which originated in Russia. Nevertheless, it is accurate to call it an error of Russia.

The Errors of Russia, and communism in particular, are ultimately an ideology to cast souls into hell. These errors are tools of the devil. The devil is a liar, and he does not care what his plans are labeled as, so long as they work to damn souls. He is perfectly satisfied if a supposedly “free” society sees itself as such, as long as the majority of souls die in a state of mortal sin; and he is conversely satisfied with an overtly communist regime — as long as the results are the same.

FATIMA IS OUR ONLY HOPE

Our Lady instructed us to pray the Rosary every day for peace, and requested that the Pope consecrate Russia to the Immaculate Heart of Mary. There is no other way to have lasting peace in our world, and there is no other way to finally rid the world of the errors that She so distinctly warned us of. Whatever may come out of these times, politically, religiously or otherwise, we must rely more heavily on the Virgin Mary’s intercession, and depend on Her heavenly aid.

[1] While it is true that all Masses are valid so long as the priest follows the correct formulae, with the correct matter and intent, it is not true that all Masses are as efficacious for the congregation or the Church. This is why a more reverent Mass, offered by a more holy priest, is always desired. See Cranmer’s Godly Order by Michael Davies, pages 48-49, for the writings of Father Josef Jungmann, who explains this concept in depth.

[2] Bella Dodd testified more than 50 years ago on how the Communist Party in the USA would put communists into Catholic seminaries to corrupt the priesthood.

[3] We must continue to pray that the Russian Orthodox will once again seek to end their schism, seek reunion with Rome, and accept the full authority of the Pope, Christ’s Vicar on earth. Remember, Russia’s conversion foretold by Our Lady will not be to “schismatic Orthodox Christianity” but to full Catholic unity with Rome. We are convinced that once Russia is consecrated to the Immaculate Heart of Mary this long-standing schism between East and West will be ended.