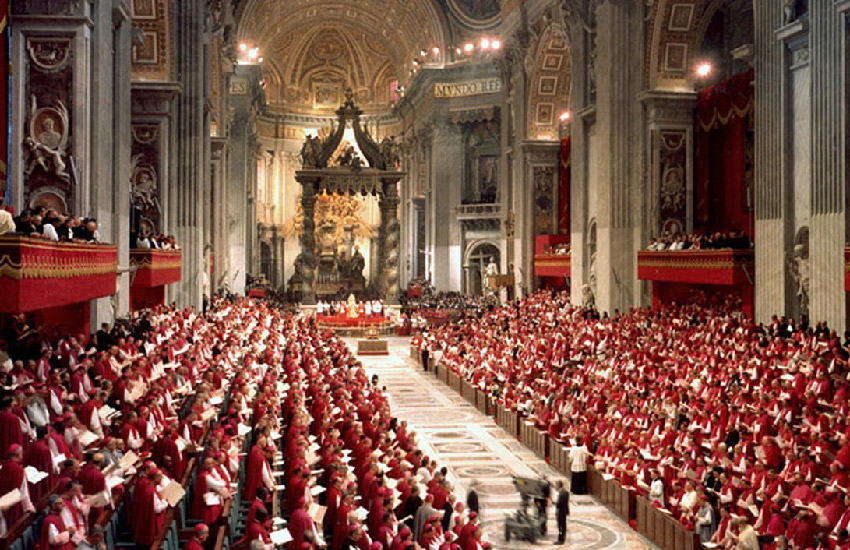 In keeping with our recent series of articles on the Society of Saint Pius X, we will continue with our presentation of information that goes contrary to the misinformed narrative about the SSPX. To this point, we have covered the topics of attending an SSPX Mass, whether or not they are in schism, and their being in communion with Rome.

As we stated in the first article, the objections and questions surrounding the SSPX are varied and come from a wide array of angles. Since the Second Vatican Council we have witnessed a great downfall of ecclesiological understanding,[1] and as a result many confusing statements or opinions circulate that unjustly fog the perception of the place of the SSPX within the Church.

Once we put many of the basic questions about communion and schism to rest, as we have done in preceding articles, a typical objection often arises:

Doesn’t the SSPX have an irregular canonical status?

The SSPX does not suggest that their situation is “normal.” It is no secret that they are treated differently than other societies of priests, and that Rome has given conflicting and ambiguous statements about the SSPX in the past. On the one hand, it is clear that attendance at their Mass constitutes no sin, and that Catholics may even tithe in good conscience.[2] Yet, on the other hand, Pope Benedict XVI said in a 2009 letter (an unfortunately confusing and ambiguous letter itself) that the ministers of the SSPX have “no canonical status in the Church and its ministers cannot legitimately exercise any ministry.”

However, under the same Pope Benedict in the spring of 2009, the SSPX was asked to move their ordinations of priests out of the German jurisdiction, and they complied. As a result, the SSPX had a strange and indisputable two-week “legal” status in the Church that lasted until Easter of that year.[3] Furthermore, there are currently dozens of dioceses around the world that utilize the SSPX to facilitate Traditional Latin Mass wedding ceremonies, their confessions have long been recognized by Rome, and, under Pope Francis, the SSPX has recognized authority to ordain priests in any diocese in the world, without needing the consent of the local bishop.

All of these activities constitute “legitimate ministries” which would indicate Pope Benedict’s 2009 statement cited above is inexact. Since the Vatican’s own official acts run contrary to it, that statement appears to be erroneous and was perhaps written out of political concerns.

Regrettably, saying one thing and then acting in a contrary manner has become a frequent occurrence within today’s post Vatican II hierarchy. Yet, is this not the inevitable result of using novel and ambiguous phrases instead of clear and precisely defined terms? Or is it not the result of abandoning fundamental axioms of reason, such as the principle of non-contradiction?[4]

Unfortunately, such inconsistencies serve to undermine one’s own authority and cast doubt on the binding degree of said claim. To further “muddy the waters,” there are even numerous other instances we could point to from before 2009 that demonstrate similar inconsistencies and inaccuracies.

The only real conclusion we can draw is that since the Vatican is unclear as to what the phrase “irregular canonical status” actually means, they themselves must be unsure of what it means. If the authorities in Rome don’t know what this term means and they refuse to define it, then how are local bishops and priests and the simple lay people supposed to know what it means? And if we can’t be certain about what a term really means, is it not better to avoid its use altogether? Especially when using it may increase confusion and lead us and others into sins against charity?

The notion of calling a canonical status “irregular” is, in fact, an irregular occurrence. Nowhere in Church history can we find usage of this term in a theologically or canonically similar manner. The Church Fathers and first Ecumenical Councils never used this term in dealing with those who embraced the early Trinitarian and Christological heresies. The schism between the Eastern Orthodox and Rome does not carry such terms, and neither do the events surrounding the Protestant figures who separated themselves from Rome. Even the Jansenists, Quietists and Modernists of the more recent centuries never faced such unclear terms.

As we said in our previous article, you are either in the Church or you are out of the Church. It is true that one can be in the Church and still be disciplined, censured or placed under penalties, but one’s status is not thereby vaguely referred to as “irregular.” Rather, in such cases, the Church follows a canonical procedure (with legal counsel, trials and even appeals) which ends in a precise and clearly defined judgment. The entire process is documented. The judgment is formal and public.

Most importantly, the individual under penalty knows the precise punishment, reason(s) for the punishment, and what is necessary for proper and formal reconciliation with the Church. Would it not be unjust for an authority to skip the whole juridical process, remain unclear on the specifics, arbitrarily change judgments, act in contradictory ways, and then simply relegate a cleric to “irregular” status?

That being said, this canonical process has not been carried out according to proper ecclesial jurisprudence by the Church vis-à-vis the SSPX. If it had, the public documents recording the process should be readily available. Yet they are nowhere to be found. Thus, it remains clear that regardless of what ambiguous language is used, the priests and bishops of the SSPX as a whole are not under any penalties.[5]

In an Irregular Time of Grave Crisis, What Is Regular?

We could go on and on with the conflicting statements and permissions granted by various Popes and Roman authorities over the years, but it should be clear at this point that the situation is indeed irregular. Yet perhaps instead of saying the SSPX is “irregular,” it would be more accurate to state that the Church hierarchy deals with the Society in a conflicting and irregular manner.

Instead of possibly being an indictment against the SSPX, is this not more likely an indictment of Rome upon herself? After all, one who abides in the truth has no need to change with the wind, contradict its own statements when the ink is hardly dry, or rely upon ambiguous and obfuscating terms. This “irregular” situation of the SSPX is actually one more irrefutable ‘data point’ that we are living through a grave crisis in the Faith and that the Church is suffering through a terrible diabolical disorientation.

Moreover, if we were to follow the foggy logic of “irregular canonical status” to its conclusion, we could apply that to many seemingly “regular” priests and orders in the Church. As noted in a previous article, the Catechism of the Council of Trent explains that not only are infidels and excommunicated persons out of the Church, but also heretics.

Think for a moment; there exist whole religious orders, like the modern-day Jesuits, who under the guidance of their Superior, may deny the basic dogma of the reality of satan! There is nothing “regular” about this situation, on behalf of the Jesuits or the hierarchy of the Church that allows this to continue.

This is in no way a “what about-ism” as I do not mean to compare an unfortunate reality of the Church with what is manifestly a healthy society of priests in the SSPX. Instead, it is simply an illustration to shed light on the fact that the term “irregular” is too vague and offers no canonical specificity.

One of the hallmarks of the post Second Vatican Council theological atmosphere is that various terms are used that further foment ambiguity and confusion. We have already demonstrated that proper terms exist to speak of all the issues pertaining to the SSPX, and those terms – terms that have stood the test of time – should be used.

If the SSPX fits the criteria necessary to be considered as having validly ordained Roman Catholic priests, offering valid sacraments to parishioners who are fully free to frequent them, then it is not the SSPX that is irregular, but instead the situation in the Church that will simply not call a spade a spade. “But let your speech be yea, yea: no, no: and that which is over and above these, is of evil.” (Matthew 5:37)

In our next two articles, we will look at the topics of jurisdiction and “state of necessity,” and how they apply to the SSPX.

[1] Ecclesiology refers to an understanding of the nature of the Church, the Mystical Body of Christ. For example, it is a Divine Institution with interrelated human and divine elements. We say there has been a breakdown in understanding of this reality because the average, and even educated, person does not understand what the Church is, or how she works. We see this with the insistence on splitting hairs between “full communion” and “partial communion,” for example. These things show us that many do not understand the basic reality of what it means to be truly part of the Roman Catholic Church.

[2] Msgr. Camille Perl, Secretary of the Pontifical Commission Ecclesia Dei, in a May 28, 1996 letter and repeated in Protocol No. 236/98 of March 6, 1998: “In the strict sense you may fulfill your Sunday obligation by attending a Mass celebrated by a priest of the Society of Saint Pius X. …If your intention is simply to participate in Mass according to the 1962 Missal for the sake of devotion, this would not be a sin. It would seem that a modest contribution to the collection at Mass could be justified.”

[3] The information for this citation can be found in the section entitled “Did Pope Benedict Lift All Suspensions From Society Priests in 2009?” of the linked article.

[4] The principle of non-contradiction is a fundamental axiom of logic. Its truth is universal and taken as a starting point for further reasoning and arguments. It requires no proof because it is self-evident to human reason and its denial would lead to incoherence and absurdity. In essence, this principle states “It is impossible for the same thing to be and not to be [or, to belong and not to belong to the same thing,] at the same time and in the same respect.”

[5] This statement applies to the Society as a group, not to any individual priest who may have encountered his own troubles on account of his own infractions. Yet, that likewise holds true for every diocese and every religious order in the world.