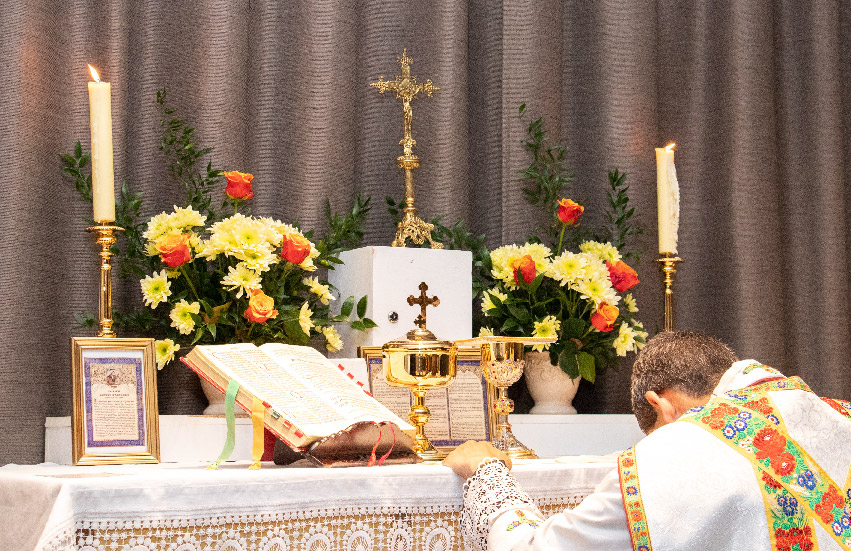 Holy Communion Under One or Both Species?

What Is Holy Communion?

The Eucharist – or Holy Communion – is the very Body, Blood, Soul, and Divinity of Jesus Christ, God Himself, under the appearances of bread and wine. It is not a mere ‘symbol’ of Christ, but rather, It is truly, really and substantially Jesus Christ, our Creator, Redeemer, Judge and King!

At the point in the Mass known as the Consecration, the priest, acting in persona Christi (in the Person of Christ), says, “This is My Body, which will be given up for you” and “This is My Blood…”. These were the words that Our Savior spoke during His Last Supper when He changed the bread and wine into His Body and Blood. By the divine power of God when these same words are spoken by the priest during the Consecration at Mass, the bread and wine become Jesus Christ.

That being said, the Lutherans, although they do not have a valid Eucharist, erroneously believe the communion in their services is both the Lord’s Body and Blood alongside the substance of bread and wine. This is called consubstantiation because both substances[3] are said to exist together in the same object at the same time. The theological view of consubstantiation, which has no basis in the teachings of the early Church at all, was explicitly condemned as heretical by the Council of Trent:

The writings of the early Church Fathers abound in teaching the Catholic doctrine of transubstantiation, long before the term was coined by the Church. To illustrate the clear Catholic view that existed for centuries, even a millennium before Martin Luther, we can turn to a few examples. St. Cyril of Jerusalem (313 – 386 AD) wrote, “Do not, therefore, regard the bread and wine as simply that, for they are, according to the Master’s declaration, the Body and Blood of Christ.” And St. Augustine (354 – 430 AD) similarly and succinctly wrote, “Christ held Himself in His hands when He gave His Body to His disciples saying: ‘This is My Body.’ No one partakes of this Flesh before he has adored It.”

What Is a Eucharistic Species?

In Theology we use the term “species” in reference to the Eucharist. What does “species” mean? The Modern Catholic Dictionary by Fr. John A. Hardon, S.J. defines “species” as the following: “Appearances, especially those of bread and wine, after the Eucharistic consecration. The term ‘species’ is used by the Council of Trent to identify the accidents[4], i.e., the size, weight, color, resistance, taste, and odor of bread, which remain exactly the same after transubstantiation. They are not mere appearances as though these physical properties were unreal. But they are appearances because after the consecration they lack any substance that underlies them or in which they inhere.”

In the Catechism of St. Pius X we find the clear and universal teaching of the Church:

The smallest fragment of the Eucharistic Host is the fullness of Christ: Body, Blood, Soul, and Divinity. And the smallest drop of the consecrated wine is likewise the fullness of Our Lord: Body, Blood, Soul, and Divinity. We may in conversation refer to the consecrated Host as “Christ’s Body” and the consecrated wine as “Christ’s Blood,” but in reality under each of the species of bread and wine there is the totality of Christ, true God and true man, and no substance of bread or wine.

A great confusion over this dogma, a teaching which is necessary for salvation, arises from the modernism which has infected the Church in the past century. In fact, many Catholics fail to understand this because Catholic parishes introduced – more than 40 years ago! – the liturgical abuses of Communion in the hand and distribution of Holy Communion (i.e., the Precious Blood) from the chalice.

The sacrilege of Communion in the hand and the distribution of both Eucharistic species have led to a growing trend of Catholics failing to believe in the Real Presence (i.e., in transubstantiation) and, even for those who do believe in the Real Presence, in believing that the consecrated Host is only Christ’s Body and the consecrated wine is only Christ’s Blood. Thus, there are many Catholics today who hold the false opinion that they receive Christ “more completely” if they receive Holy Communion under both species. Some are even angered by the possibility that the Precious Blood might be reserved only for the priest, mistakenly thinking that they then receive “less grace” or are “discriminated against” for not being ordained. These are pernicious and terrible errors which cause great damage to authentic Catholic Faith in the Holy Eucharist.

Should We Receive Holy Communion from the Chalice?

In the Traditional Latin Mass, Holy Communion is given only to those who are kneeling (with the elderly and ill allowed to stand if they are unable to kneel), on the tongue, and only under one species (i.e., the Sacred Host). Why?

The Baltimore Catechism in Q. 900 advised, “The Church does not give Holy Communion to the people as it does to the priest under the appearance of wine also, to avoid the danger of spilling the Precious Blood; to prevent the irreverence some might show if compelled to drink out of a chalice used by all, and lastly, to refute those who denied that Our Lord’s Blood is present under the appearance of bread also.”

The trend following Vatican II to distribute both Eucharistic species incorporates a Protestant practice that the Catholic Church had repeatedly prohibited in order to both safeguard Our Lord’s Body and Blood and to teach more fully the authentic theology of the Real Presence under one species. For those looking for more thorough information, the Catholic Encyclopedia summarizes the Church’s history of this topic.[6]

[1] Although the Orthodox have a valid Eucharist, it is illicit and therefore Catholics may not partake of it. One who knowingly and willfully participates in an illicit Sacrament is guilty of mortal sin. According to St. Thomas Aquinas:

“Some have contended that heretics, schismatics, and the excommunicate, who are outside the pale of the Church, cannot perform this sacrament. But herein they are deceived, because, as Augustine says (Contra Parmen. ii), ‘it is one thing to lack something utterly, and another to have it improperly’; and in like fashion, ‘it is one thing not to bestow, and quite another to bestow, but not rightly.’ … But such as are ordained while separated from the Church, have neither the power rightly, nor do they use it rightly. But that in both cases they have the power, is clear from what Augustine says (Contra Parmen. ii), that when they return to the unity of the Church, they are not re-ordained, but are received in their orders. And since the consecration of the Eucharist is an act which follows the power of Order, such persons as are separated from the Church by heresy, schism, or excommunication, can indeed consecrate the Eucharist, which on being consecrated by them contains Christ’s true Body and Blood; but they act wrongly, and sin by doing so; and in consequence they do not receive the fruit of the sacrifice, which is a spiritual sacrifice.” (Summa Theologiae, Pt. III, Q. 82, Art. 7, at https://www.newadvent.org/summa/4082.htm#article7)

[2] In his papal bull, Apostolicæ Curæ (1896), Leo XIII definitively ruled with “certain knowledge, we pronounce and declare that ordinations carried out according to the Anglican rite have been, and are, absolutely null and utterly void.”

[3] In these discussions, the term ‘substance’ is used as a technical philosophical term to refer to the metaphysical truth of a thing’s “ultimate essence” or its “absolute reality”.

[4] In this context, the term ‘accidents’ is also a specific philosophical term. It does not refer to something that happens unexpectedly or unintentionally. Rather, it is contrasted with “substance” so that an accident is anything that can change without altering the “substance” or essence of a thing. For example, my location, weight, height, and skin color may all change, but I remain who I am. Similarly, if I lost an arm or a leg, I would still be the same person. These things may change and yet my every essence (nature) does not change; thus, they are classified under the Aristotelian term ‘accidents.’

[5] The Council of Trent condemned as heretical anyone who claimed that the Eucharist is not the Body and Blood and Soul and Divinity of Christ:

“If anyone denieth, that, in the sacrament of the most holy Eucharist, are contained truly, really, and substantially, the body and blood together with the soul and divinity of our Lord Jesus Christ, and consequently the whole Christ; but saith that He is only therein as in a sign, or in figure, or virtue; let him be anathema.”

[7] For more information, see “Mission to Restore Eucharistic Reverence” for ample support and evidence against Communion in the hand, at https://acatholiclife.blogspot.com/2007/07/mission-restore-eucharistic-reverence.html