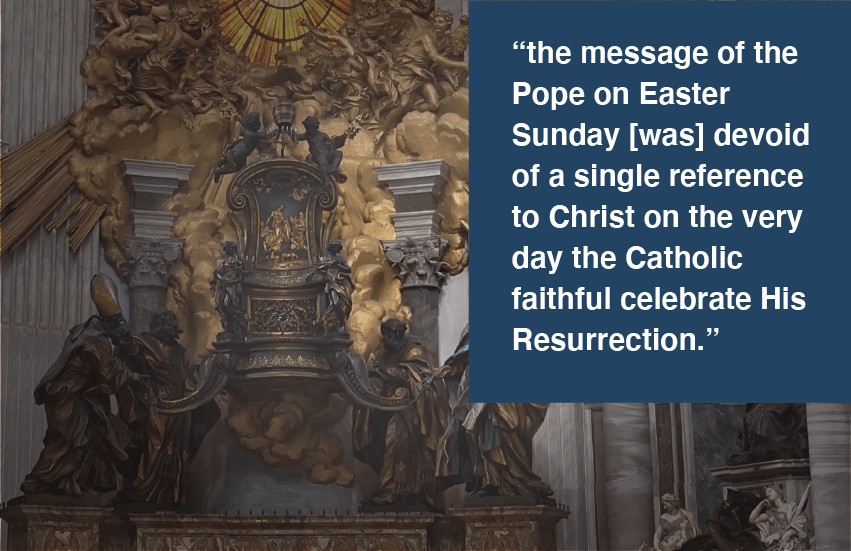 As I write this column for The Fatima Center, my 96-year-old father is battling the Wuhan virus in a New Jersey nursing facility where he is being administered hydroxychloroquine — the drug the lying media mock merely because Donald Trump endorsed it — along with zinc, Vitamin C and a powerful antibiotic. The prayers of many assist him as well.

I am asking readers of this column to remember my father in your prayers. We have every hope he will recover from the virus, whose potential lethality is not in question. Likewise not in question, however, is the lethality of the annual flu epidemics, which claim tens of thousands of lives each year in America, especially among the elderly.

What is in question is the veritable cult of civic subservience to a particular coronavirus merely because public authorities and the lying media have induced widespread panic over its existence by breathlessly tallying every death attributed to it — hour-by-hour, day-by-day, week-by-week. Had this been done, say, during the flu pandemic of 2017-18 involving the H1N1 or “swine flu” virus that first appeared in 2009, how much greater would the panic have been, given that the 2017-18 pandemic caused an estimated 61,000 deaths in the United States alone and was “severe for all ages”?

What is going on here? I think the answer is clear by now to all but the willingly obtuse: Orchestrated fear over this particular virus is being exploited by the globalist Left to remake the world according to its designs. The “post-COVID world” the globalists now gleefully anticipate will — so they hope — usher in a new era of global socialism in which the globalist elites, as always, live in luxury while the hapless masses bear the yoke of their centralizing schemes.

How sad it is, how terrifying really, to see none other than the Pope himself politicizing this virus to preach socialist economic measures now being advocated by the Democrat Party in the United States. In a letter addressed to “popular movements” on Easter Sunday, no less, Francis said nothing of the Risen Christ, the hope of life eternal He represents, and the unavoidable reality of suffering in this world which, if embraced as He embraced the Holy Cross, is the means of purification on the way to eternal beatitude.

Instead, incredibly enough, Francis stoked class warfare and resentment of the rich and called for a “universal basic wage” — a key plank in the socialist platform in virtually every nation.

Herewith the pertinent phrases of this appalling missive, which represents a total de facto abandonment of the role of Vicar of Christ — a title Francis has demoted to a mere historical artifact — and instead expresses the concerns of a Leftist politician:

The exploitation of a viral pandemic to promote “change” approved by the globalist Left is utterly shameless, and the amount of Leftist cant compressed into a mere two pages is astonishing. This was the message of the Pope on Easter Sunday, devoid of a single reference to Christ on the very day the Catholic faithful celebrate His Resurrection.

We have to confront the reality of our situation: We have a Pope who closes the churches but calls for open borders in the midst of a pandemic. To quote Antonio Socci: “Pope Bergoglio asks for the reopening, not of the churches but of ports for immigrants, and he does so by writing to Luca Casarini.”

Socci is referring to a handwritten letter from Francis to one Luca Casarini, portrayed by the Leftist press in Italy as a “lifeguard” who saves “migrants” in the Mediterranean, when he is actually “an ultra-left militant who is being investigated for aiding illegal immigration.” As Casarini boasted, the Pope told him in the letter that “I am close to you and your companions. Thanks for all you do.” In fact, Casarini promotes the deadly trade of human trafficking the Pope himself encourages. Francis calls for open borders, and consequent drowning deaths in the Mediterranean, at a time when even the EU nations have closed their borders to prevent spread of the Wuhan virus.

What can the faithful do but bear the brunt of this uncanny pontificate until God deigns to give the Church a new earthly head? The next Pope, one hopes and prays, will be the one who finally executes Heaven’s command that Russia be consecrated to the Blessed Virgin Mary so that the diabolical disorientation we now witness, in both Church and State, will end in the midst of the Triumph of the Immaculate Heart.