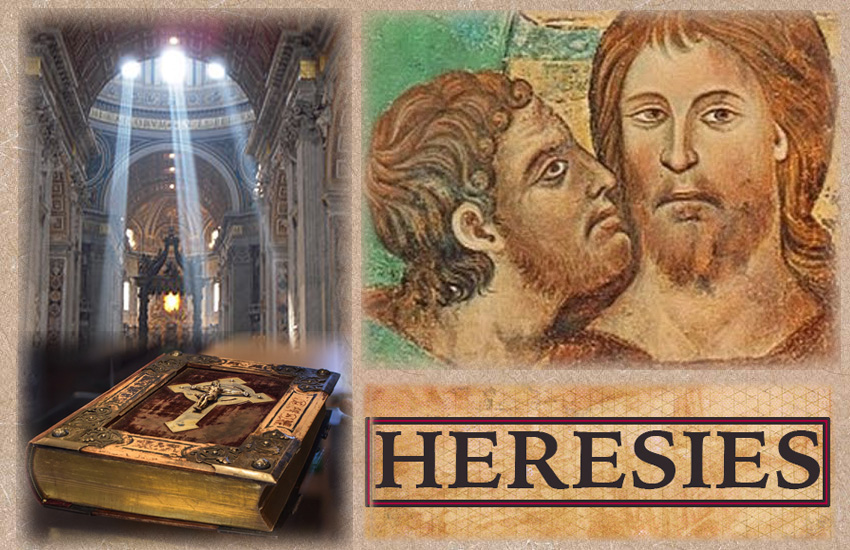 Part 12 – Basic Catechism on the Bible

The infamous Jesuit Teilhard de Chardin is one of the most despicable, yet widely read proponents of gnostic-evolutionary theology of the past century. In fact, his influence reached so far that even many of our leaders and influential theologians of recent years have fallen prey to his writings.[1] Perhaps de Chardin’s most famous idea is the “Cosmic Christ.” According to him, this is the “omega point of all evolution.” Sadly, de Chardin even blasphemously claimed, “It is Christ, in very truth, who saves, – but should we not immediately add that at the same time it is Christ who is saved by Evolution?”[2]

The crux of why evolutionism and Gnosticism are so intimately linked is understood by the notion of “emanation.” Emanation, the way it is used in gnostic theology, means that the essence or “stuff” of something is released in some capacity in order to facilitate the procreation of something else. This implies that a “divine source material” comes forth from God and is the primordial essence for each created thing. This error entails that each created thing in a way contains a “piece” of God, which is not theism, but pantheism. This type of fallacious thinking can be peppered with Catholic language and appear orthodox, but it is nothing more than dressed-up Hinduism.

Yet this notion makes no sense when you do any research into orthodox theology or even good science. The more reliable natural sciences will tell you that there is a constant state of decay amongst created things,[4] which in fact does make sense if you consider the Fall. We are to believe as Catholics that after the Original Sin, death came into the world as a result of decay which stems from the death of the soul through mortal sin. The soul is the form of the body, thus when the form is corrupted then the body must be also. This corruption in our nature is inherited in each subsequent generation, and although we can retrieve the sanctifying grace necessary for salvation through the sacraments, we cannot recreate our fallen material nature.

This poses a real problem for both evolutionist and gnostic alike. On the one hand, the disciple of de Chardin must believe that each created thing contains the “divine stuff” necessary for pro-generation and evolution, but at the same time must believe in the decay of created things. In order to reconcile this problem, the Teilhardian once again appeals to the idea of emanation to suggest that all created things “yearn” to return to their divine source when they reach their “omega point” — final end.

This is, as I have said, the same thing as Hinduism, and it is also rubbish scientific thought. How can something both evolve and decay at the same time?[5] It cannot, and any child with common sense could tell you this. In order to “fix” this contradictory problem, the materialist gnostic, i.e. evolutionist, appeals to the Big Bang. The Big Bang is nothing more than materialist emanation from a primordial (and unfounded) source that sets forth all things in the universe. Like the mythical primordial ooze, in this Big Bang is present all that is necessary for the complexification of life and the evolution of the heavens. Big Bang cosmologists will also tell you that at the root “everything is energy,” and when the universe finally does destabilize, everything will be essentially imploded back to the “singularity.”[6] Big Bang cosmology is nothing more than pantheistic, Teilhardian physics. It is nonsense and offensive to God and His Majesty. No Catholic should buy into this demonic delusion for even a second. It offends both common sense and the proper interpretive sense of Divine Revelation.

Gnosticism is ultimately demonic, and therefore will use any means necessary to deceive people from the saving truth. There is no distinct dogma of Gnosticism, because it is in fact “evolutionary.” It changes with the times in order to deceive people in all contexts. Ultimately, an end of Gnosticism is to have people focus on anything other than God Himself. This may be by false spiritualism, but it may also be by a disordered focus on material things. Although proponents of evolution may feign a strict adherence to empirical science, this is not true. It is built into the human heart to desire truth, hence Christ as the Truth incarnate. But, sinful man is susceptible to being fooled by partial truths, especially if his pride is thereby satisfied.

There are many partial truths in gnostic thinking, as well as in evolutionary thinking. But, these truths ultimately lack a solid foundation in reality. What’s worse, they do not demand true morality. An ancient gnostic could have his natural yearning for God satisfied by an appeal to religious ideas. But he also has his pride puffed up by the “secretive” knowledge that only the most “enlightened” possessed, of which he of course was a member.

Evolution functions in the same way. Man cannot live without a creation story, as doing so would mean that he is something like an orphan with no patrimony or beginning. Thus, evolutionary theory gives the prideful modern man a materialist ‘creation myth’ to latch on to. There is, of course, no basis for virtually any of the claims of evolution, so the evolutionist is free to construct icons and stories to fill in the gaps.

This contradiction of Divine Revelation is in turn a direct blasphemous attack upon God. It rejects the foundational truth we profess at the start of the Creed, “I believe in God the Father Almighty, Creator of Heaven and Earth.” Clearly, one cannot be a gnostic illuminati or proponent of Darwinian evolutionism and also a true disciple of Christ.

[2] This quote is from the same article referenced in footnote one.

[3] Complexification is a term used often by Teilhard de Chardin, and it is used to describe a process from which simpler and less complex things are evolved into more complex and sophisticated “higher” things. He applied this to both material and spiritual things.

[4] The Second Law of Thermodynamics states that a closed system spontaneously moves towards thermodynamic equilibrium, that is the state with maximum entropy (randomness or disorder).

[5] A tell-tale sign of modernism is to claim two mutually contradictory statements are true. The modernist repeatedly violates the basic logical principle of non-contradiction (that is, contradictory propositions cannot both be true in the same sense and at the same time).

[6] The singularity is the absurd idea that there is a self-containing starting and ending point to all created things.  All things come and go to this “single” destination where they find their “alpha and omega” point.