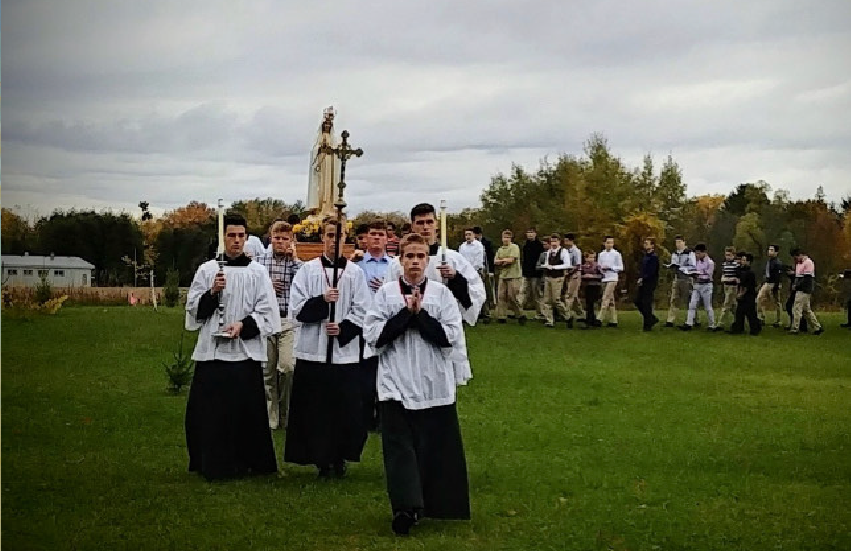 Summary of the Global Compact on Education

Read Part 2 which describes how the Vatican’s Global Compact on Education is a ‘Masonic Manifesto’ which could have been expected, as it represents a message which Pope Francis has consistently advocated.

Part 3 — Summary of the Global Compact

The Writing Was on the Wall

It is with a heart full of sadness that we must face reality: Pope Francis has consistently undermined Church teaching with a plethora of statements, interviews, actions and omissions.[1] We might think of his “who am I to judge” statement uttered on an airplane interview. As a result, the whole world then claimed the Catholic Church was somehow changing her teaching on sexual ethics. Also, the encyclical Amoris Lætitia fomented terrible dissent and confusion as it undermined traditional Catholic morality by advocating situation ethics. Even worse, it gave bishops and pastors the green light to administer Holy Communion to those living in a state of public sin. And Francis has left the formal dubia of the four cardinals unanswered for well over 1500 days (since 19 September 2016).

Furthermore, in his encyclical on the environment we find statements such as: “prevents us from seeing nature as something separate from ourselves or as a mere setting in which we live. We are part of nature, included in it and thus in constant interaction with it.” Inherent in the freemasonic worldview is a sort of pantheism, since we are deified into our own gods, and this pantheistic sense is rife within statements such as these from Laudato Si; the idea that we are a “part of nature” is more like Hinduism than Catholicism. Pope Francis has suggested that there is no hell, that some souls might simply be annihilated upon death, which is a common in error in Eastern religions.

Yet, perhaps most lamentable for those devoted to Our Lady of Fatima, Francis has even implied blasphemy against the Blessed Virgin Mary.[2]

Although these novel initiatives continue to scandalize the Catholic faithful, they should no longer ‘catch us by surprise’ – precisely because they are all part of a consistent freemasonic and non-Catholic message. Far worse is that many Catholics remain unaware of this devastation, which is ample evidence that the Catholic Faith has been lost among so many of the baptized. An even greater travesty is that this is harming the faith of many and severely hindering the apostolic work of the Church. Amidst this great debacle, many souls are falling into hell.

Let us, therefore, pray that God will draw good out of these evils. For example, with every scandalous statement or action by Francis, it seems more and more Catholics are becoming aware of the ongoing relevance and absolute importance of Our Lady’s Message of Fatima.

The Document in Brief

Because Freemasonry exalts man to the place of ultimate judge of morality, it is a grasping at equality with God, which is not unlike the Original Temptation of Adam and Eve to “become like gods, knowing good and evil.” The True Religion has been at odds with this temptation since the beginning of time, and this is clear when we contrast the nature of pagan religions with Catholicism.

In our faith, we understand that we are indeed separate from God. However, contrast that with Hinduism, which expresses that we are all “atman” (soul-like particles of the universal nature), which will eventually go back to “brahman” (the ultimate spiritual state). We are uniquely made by God, and even in Heaven we remain so; but the language emanating from the Global Education compact smacks of this eastern pantheistic outlook. Sadly, some of the pantheistic language included is from Laudato Si, which the Pope wrote at the beginning of his pontificate: “There can be no renewal of our relationship with nature without a renewal of humanity itself. There can be no ecology without an adequate anthropology” (no. 118). What is being suggested here in this document by citing the Holy Father’s encyclical on the environment? Are we supposed to rethink our very nature in order to serve the needs of “ecology?” This is troubling indeed.

It is telling that the majority of citations in anything coming out of the Global Compact on Education are from documents or messages already promulgated by Francis. His papacy has been a veritable parade of Freemasonry for the world to see. The demon spirit of Freemasonry has long reigned in the world and the Vatican, and now it is as plain as ever. What is worse, most of the clergy the world over will go along to get along, even if they do not believe the nonsense shoved down their throat from Rome. “You wish to establish the reign of the chosen ones on the throne of the prostitute of Babylon; let the clergy march under your standard, always believing that they are marching under the banner of the Apostolic keys.” (Permanent Instruction of the Alta Vendita)

As always, the solution is the Rosary and other fervent prayer that Russia will be consecrated to the Immaculate Heart of Mary. Humanly speaking, the task of turning things around is impossible, but it is not a human endeavor in which we participate. As Saint Paul says, this is a battle between Principalities and Dominions, and therefore let us put on the Armor of God and fight under the mantle of Our Lady, with Saint Michael as our General. There will be a Triumph of the Immaculate Heart, and the taste of victory will be ever so sweet after the bitter toleration of this Freemasonic deluge.

[1] An entire website (https://en-denzingerbergoglio.com) has been dedicated to cataloging the sayings of Pope Francis which undermine Catholic teaching. While it is created by Spanish-speaking Catholics, part of it has already been translated into English.

[2] In a homily at the Santa Marta house, Pope Francis said: “She was silent, but in her heart, how many things told the Lord! ‘… You had told me that he would be great, you had told me that you would have given him the throne of David, his forefather, that he would have reigned forever and now I see him there!’ Our Lady was human! And perhaps she even had the desire to say: ‘Lies! I was deceived!’” (December 20, 2013)