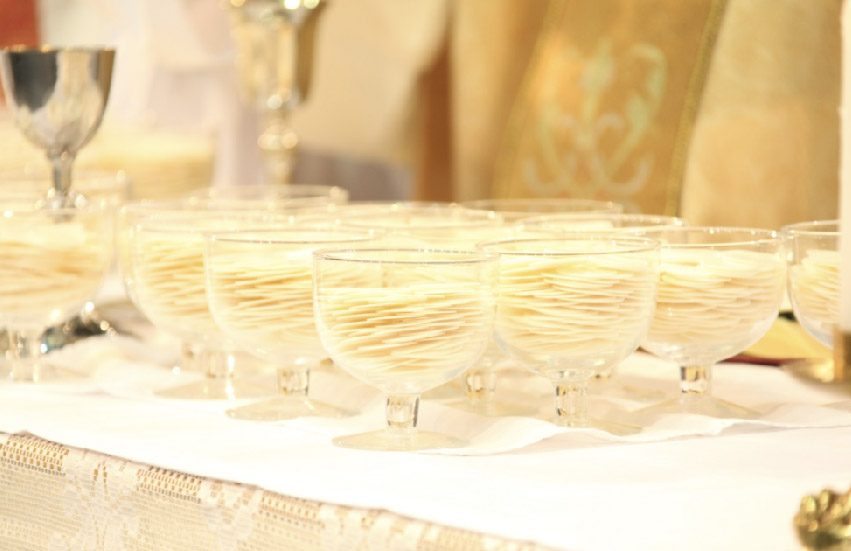 As we continue to meander through the dizzying reality that has become the Twilight Zone episode of the year 2020, we are witnessing a rise in sacrilege at Catholic churches throughout the world. As the Church celebrates the Feast of Corpus Christi this week (Thursday, June 11), it is fitting to reflect upon the current situation in light of this great Mystery of Faith.

To Receive Properly or to Abuse

In some places, bishops have mandated that Communion on the hand be the normative method, even against the advice of medical professionals who have clarified that on the tongue is “more sanitary.” In other places, prelates have succumbed to, shall we say, more “innovative” ways to distribute the Eucharist. In one instance, a pastor in the Archdiocese of Cleveland, Ohio even considered handing out the Body, Blood, Soul, and Divinity of Our Lord in a plastic bag. To make matters worse, the pastor was willing to distribute to anyone who simply came to the parish door! Thankfully, this monstrous way of abusing Jesus Christ seems to have been called off, due to sane and rational Catholics flooding the diocese with their devout objections.

In conversation with someone on Twitter, I was informed that a parish in Indiana had implemented a “Communion as you go” approach. This means that you are handed the Eucharist, in your hand, and then expected to leave the building as quickly as you possibly can. We already have a grave problem in that many Catholics are accustomed to receiving the most Blessed Sacrament without due preparation or adequate thanksgiving.[1]

For example, St. Louis de Montfort spent hours preparing to receive Holy Communion and then hours on his knees after reception of the Holy Eucharist. Can we not spend fifteen minutes[2] in this most necessary spiritual exercise? One of the principal reasons why Catholics are deriving so little spiritual grace and fruit from this Sacred Sacrament – the source and summit of our lives – is that we don’t spend sufficient time in preparation or thanksgiving.

Before I go on, I should mention that as much as these stories may invoke legitimate feelings of righteous anger towards faithless hirelings who facilitate these abominations, we must above all pray for the souls of these priests. Any cleric who treats the Most Holy Eucharist in such a manner, or who oversees such a desecration, is quite literally playing with [eternal] fire.

I imagine that most everyone who reads this website understands quite well the problems with this type of handling of the Sacred Host. However, it is still worth considering the practical issues that arise from these circumstances.

If you speak with anyone experienced in demonic warfare – an exorcist, for example – you will learn that satanists use consecrated Hosts in their infernal rituals. In some cases, motivated adherents of diabolical worship will boldly steal the Eucharist from tabernacles or the monstrance in an Adoration chapel. In many cases, they have been known to take advantage of the liturgical abuse of reception in the hand by quickly tucking the Body of Christ in their pocket as they scurry away from a distracted priest (or “extraordinary minister”). Both of these maneuvers entail some risk. More than a few times, concerned and attentive Catholics have stopped these demonic criminals in their tracks. However, with absurd practices such as those already mentioned, any devil worshipper could easily take Our Lord hostage!

As sensational as the sequestration of Jesus Christ by a satanist may be, the simple fact that many pastors and laymen are willing to put up with any sacrilege at all is the real problem.

Sadly, we should not be surprised that luciferian liturgical abuses could be so easily instantiated, as these absurdities are only the logical result of decades of sacrilege and abuse.

That Communion on the hand, something dubiously licit, is even normative in most Novus Ordo parishes should be sufficient evidence that many in the Church operate under a sort of functional atheism. What I mean is that the willingness to treat Our Lord’s Real Presence in such a manner speaks volumes as to what one actually believes. Now, I understand that the issue is certainly complicated for some, and I do not mean to suggest that an average layman, or even a priest in every case, does not believe in God. After all, it is custom in many places to distribute and receive on the hand, and surely some have never given the issue much thought. However, the way that we act is reflective of what we believe, and one does not simply go from a holy reverence for the Body of Christ to distribution of His Body in a plastic bag.

For example, imagine if you were to attend a funeral and witness a careless handling of the remains of a deceased loved one. I would think that the improper handling of the body of a family member or friend would not be tolerated by those who love him. In fact, I would gather that even a stranger would find the mishandling of the corpse of a fellow human person to be unacceptable. If you witnessed someone abuse the solemn reality of a man’s funeral, what would you think?

This may seem like a crude analogy, but it is more similar than one might think. The Holy Sacrifice of the Mass is, in fact, a sacred memorial. The death (and Resurrection!) of Our Lord is made present to the faithful by Holy Mother Church. And, it is truly the Body of Christ that is present to us, not merely a symbol.

If we truly do love Jesus, then we should be outraged at even a smidgen of liturgical abuse, just like we would be at a haphazard memorial of any other person we love. Furthermore, if so many priests and laymen are willing to submit themselves and others to sacrilege, how can we believe that they truly love Our Lord?

Once again, I do not mean to judge the interior disposition of any man, as I have already said this issue can certainly be complicated. Nonetheless, the mistreatment begs the question of not only love of God, but perhaps even a doubtful belief that He is even present at the Mass.

Now, if a priest or layman doubts the Real Presence of Jesus on the altar or in the tabernacle, does he even believe in Jesus Christ in the first place?[3] Perhaps he would say that he really does believe “in god,” but does he believe in the One True God, in He Who said, “Amen, amen I say unto you: Except you eat the flesh of the Son of man, and drink his blood, you shall not have life in you.” (John 6:53)

The Sacred Body of Our Lord is not a mere symbol, and certainly not something to be distributed like a common grocery store item or piece of fast-food. No, Our Lord should be treated in the manner He ordained through the sacred tradition of the Catholic Church. Anything other than that begs the question of whether a man really believes in Him at all.

[1] Any Catholic missal worth its salt will include an abundance of prayers to help one prepare devoutly for Holy Communion and make a generous and heart-felt thanksgiving. Some of the best known are the Prayer of St. Ambrose and Prayer of St. Thomas Aquinas before Holy Communion, and those of St. Bonaventure and St. Augustine after Holy Communion. Yet, there are many more, and Catholics would do well to familiarize themselves with such prayers and frequently offer them. You can download HERE a short .pdf document where we have compiled a sampling of such appropriate traditional prayers.

[2] The Baltimore Catechism, Lesson 23, tells us what amount of time should be spent in thanksgiving:
“Q. 914. What length of time should we spend in thanksgiving after Holy Communion?
“A. We should spend sufficient time in Thanksgiving after Holy Communion to show due reverence to the Blessed Sacrament; for Our Lord is personally with us as long as the appearance of bread and wine remains.”

[3] St. Thomas Aquinas explicitly teaches that one who denies even one article of faith (a de fide or infallible dogma) no longer has the supernatural gift of Faith. This is because Faith is an act of the will by which one’s intellect assents to all the truths revealed by God, Who can neither deceive nor be deceived. If one accepts 99% of all dogmas, but rejects just one, then he only holds those other teachings as true based on his own intellectual opinion, and not upon the supernatural gift of Faith. Thus, one who does not believe in the Real Presence of Christ in the Eucharist does not have Faith. And as St. Paul teaches, “without faith it is impossible to please God” (Heb 11:6).

You can read St. Thomas’ explanation here. A quick summary of his words on this topic are: “Just as mortal sin is contrary to charity, so is disbelief in one article of faith contrary to faith. Now charity does not remain in a man after one mortal sin. Therefore neither does faith, after a man disbelieves one article.” (Summa Theologiæ, Second Part of Part II, Q.5, Art. 3)