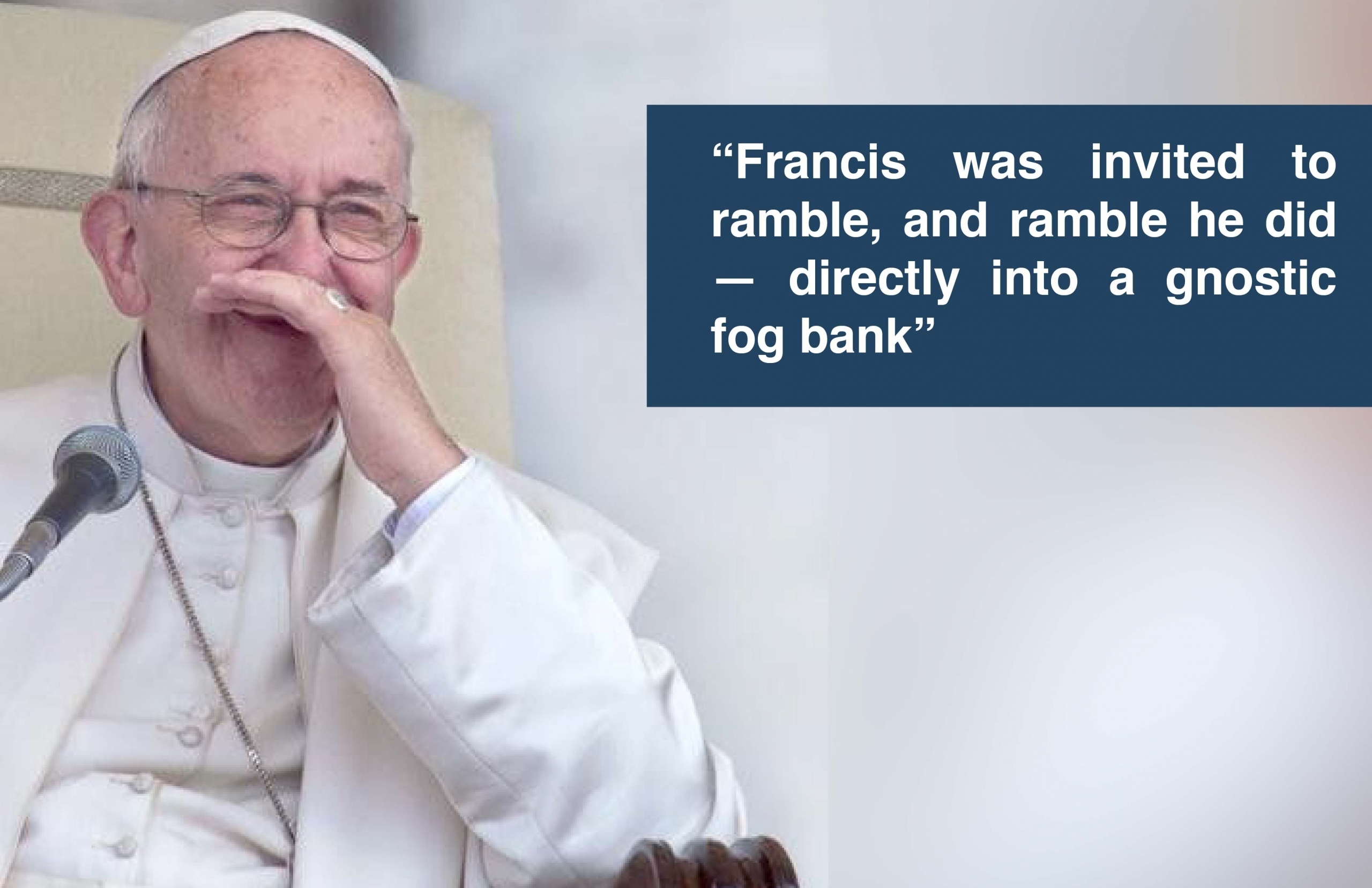 In an interview with The Tablet, Francis rightly condemns the barbarity of eugenic abortion and the Malthusian mentality behind the practice of contraception, but only in passing. From Francis we never see as to these moral issues a formal declaration as explicit as his demand for abolition of the death penalty — a just punishment for a guilty party convicted of the crime of murder — which he falsely equates with abortion, the intrinsically evil mass murder of innocents.

If only the interview had ended there. But, of course, it didn’t. Francis was invited to ramble, and ramble he did — directly into a gnostic fog bank, which is where his musings lead so often, even as he condemns Gnosticism (the heresy of secret revelation to the initiated few).

I will skip over the Pope’s nebulous musings on the need for “an economy that is less liquid, more human” as a response to the Wuhan virus epidemic. Suffice it to note that his Easter Sunday call for a “universal basic income” is precisely an appeal to liquidity: tax the “rich” — meaning the upper middle class as opposed to the billionaires for whom taxes are a trivial matter — in order to redistribute hard cash to those who prefer not to work. Yes, prefer not to work. For welfare and unemployment benefits already cover those who, in theory, are unable to work through no fault of their own, whereas “universal basic income” is simply “a government guarantee that each citizen receives a minimum income.”

We encounter the gnostic fog bank when Francis answers a question about whether he sees emerging from the “crisis” of the virus a Church that is “more missionary, more creative, less attached to institutions?” To which Francis replied:

Utter nonsense. First of all, there is nothing “Pelagian” about an institutional Church whose institutions were divinely established 2,000 years ago, which is the Catholic Church.

Secondly, a Church without fixed institutions is by definition not an institutional Church but a church whose structure is in flux.

Third, if this flux is supposedly guided by the Holy Spirit, “who makes the Church” in an ongoing structural revelation through history, then someone has to claim the ability to discern what “the Spirit” is producing in the ecclesial flux right now, and there we have precisely a gnostic conception of the Church dependent upon the claimed knowledge of “people who knew.”

No Pope before the Second Vatican Council would recognize such thinking as remotely Catholic. Rather, Pope Saint Pius X would condemn it as the essence of Modernism, according to which “the Church itself is fed by the need of accommodating itself to historical conditions and of harmonising itself with existing forms of society. Such is religious evolution in detail.” And such is a Church that, according to Francis, must accommodate itself to a “post-COVID world.” Quoth Francis: “This is the freedom of the Spirit in the midst of a crisis, not a Church closed off in institutions.”

Perhaps the Wuhan Virus is better named the Gnostic Virus, whose emblem in politics is the face mask, imposed by Democrats, and in the Church the shuttered parish, imposed by Modernists who despise a Church “closed off in institutions.”