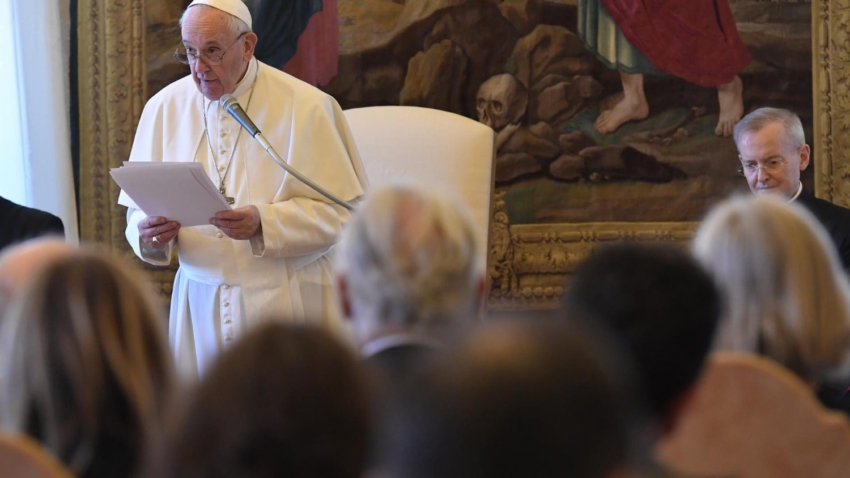 “Now, the masonic sect produces fruits that are pernicious and of the bitterest savor. For, from what We have above most clearly shown, that which is their ultimate purpose forces itself into view – namely, the utter overthrow of that whole religious and political order of the world which the Christian teaching has produced, and the substitution of a new state of things in accordance with their ideas, of which the foundations and laws shall be drawn from mere naturalism.”
– Pope Leo XIII, Humanum Genus (1884), No. 10.

Most of our readers are aware of what constitutes Freemasonry. Nonetheless, a quick refresher may be helpful. Freemasonry is a pseudo-religious/philosophical ideology that operates in secrecy. Since 1738, no less than eight popes have condemned it. Joining a masonic sect comes with the penalty of automatic excommunication.[1]

The term ‘Masonry’ can refer to specific secret societies that call themselves Freemasons, or to groups that operate under similar principles and associate in some manner with masonic enterprises. As it is designed to be secretive, it is difficult to pin down which groups truly are affiliated, or the specific beliefs of each masonic sect. Over time, certain secrets have been released, either by defecting members or by those within who intentionally wished to divulge information.

Freemasonry allows belief in a ‘Supreme Being’ but seeks to eradicate all dogma. It wholly rejects the reality of grace, of the sacraments, and of the miraculous. Salvation does not come from Jesus Christ and His Cross, but from men working on a purely natural level. They reject Christ as King and hence seek to destroy all monarchies and all hierarchy. The secular State must reign supreme. Freemasonry proclaims a universal brotherhood of men by insisting upon ‘equality and liberty for all.’ It seeks to replace the worship of God by exalting the cult of man.

Freemasonry seeks to establish a one-world government with a one-world religion, where they have control over all the earth’s resources and have power over all men. In order to achieve this objective, Freemasonry knows it must destroy the primary obstacle preventing this – the Catholic Church, which is the one true universal society that is capable of granting all men true freedom, fraternal charity, global peace, and salvation.

Masonic groups have done much to influence all society. For example, they have been at the foundation of the major revolutions in France, Mexico, the Americas, Italy and Russia. It is a little known fact that through the influence of French Academia in Russia throughout the 1800’s, freemasonic ideals and organizations became widespread in that land. Communist organizations, like the Bolsheviks, not only held masonic ideals and operating principles, but were even funded by Freemasons.

In essence, freemasonry is an ‘anti-religion’ which facilitates an ‘anti-church.’ It is a demonically-inspired organization with ultimate allegiance to Satan himself. Saint Maximillian Kolbe recognized this at Saint Peter’s Square in 1917. He witnessed a group of Freemasons celebrating their bicentennial and proclaiming: “Satan Must Reign in the Vatican. The Pope Will Be His Slave” (read details here). As the pope is Christ’s Vicar, diabolic freemasonry seeks to usurp that authority.

John Vennari, of happy memory, disclosed the Freemasons’ admitted plan in his booklet, The Permanent Instruction of the Alta Vendita. It contains the Italian freemasonry manifesto to take over the Church. The booklet, which is available from The Fatima Center, relays the following:

The Instruction called for the dissemination of liberal ideas and axioms throughout society and within the institutions of the Catholic Church so that laity, seminarians, clerics and prelates would, over the years, gradually be imbued with progressive principles.

In time, this mind-set would be so pervasive that priests would be ordained, bishops would be consecrated and cardinals would be nominated whose thinking was in step with the modern thought rooted in the French Revolution’s Declaration of the Rights of Man and other “Principles of 1789” (equality of religions, separation of Church and State, religious pluralism, etc.).

Eventually, a Pope would be elected from these ranks who would lead the Church on the path of “enlightenment” and “renewal.” They stated that it was not their aim to place a Freemason on the Chair of Peter. Their goal was to effect an environment that would eventually produce a Pope and a hierarchy won over to the ideas of liberal Catholicism, but who would all the while believe themselves to be faithful Catholics.

These Catholic leaders, then, would no longer oppose the modern ideas of the Revolution (as has been the consistent practice of the Popes from 1789 until 1958 – the death of Pope Pius XII – who condemned these liberal principles) but would amalgamate them into the Church. The end result would be a Catholic clergy and laity marching under the banner of the Enlightenment, all the while thinking they are marching under the banner of the Apostolic keys.

We must pay special attention to the fact that it was not their aim to place a Freemason on the Chair of Peter, but to have a man there who outwardly presented himself as a Catholic, while at the same time promulgating the ideals of ‘liberal Catholicism’; that is, the Enlightenment-inspired freemasonic ideals describe above. Does Pope Francis not fit this description?

One of the primary objectives of the Church is to teach the Faith, which is a divine command of Our Lord, Who said, “Going therefore, teach ye all nations” (Matthew 28:19). Thus, it is the goal of the masonic enterprise to infiltrate into Catholic and public education in order to corrupt the youth, thereby making them susceptible to their false principles. They have been willing to be patient, progressing slowly so that their ideology seeps more deeply into each successive generation and permeates every facet of society.

Public education has long been under the guidance of masonic principles, which are usually presented under the guise of the “Enlightenment” (more appropriately referred to as the “Darkening”). Religious indifferentism, loose morals, socialism, evolutionism, the ‘sacrosanctity’ of nature, and a disdain for past greatness (e.g., think anti-Columbus hysteria) are all hallmarks of the masonic education initiative. Although we often say our educational system is ‘broken,’ it has actually been extremely effective in achieving its goal of creating a society dominated by this festering ideology. In fact, a ‘liberal’ today is simply an intellectual Freemason, whether he uses that title or not.

Catholic education has long been infiltrated as well, though this take-over was dramatically intensified following the Second Vatican Council. As the hierarchy sought to open the windows of the Church to let in worldly ‘fresh air,’ it was the smoke of Satan that seeped in. This should have been foreseen since freemasonic darkening principles were masquerading under the cloak of the ‘fresh air’ of modernity.

Within a few short years, Catholic education was in complete ruin. Catholic universities, for example, now openly promote heresy and even abortion, an unnatural vice without shame. Few are the Catholic institutions that boldly teach the Social Kingship of Christ and the infallible dogma that there is no salvation outside the Church. Rare is the seminary that familiarizes future priests with the great papal encyclicals which for more than a century (1830-1950) resisted the lies of freemasonry.

To make matters worse, it seems that Pope Francis and his Vatican cohort are no longer hiding their leanings towards the Lodge. The Global Compact of Education presents us with a Masonic Manifesto, masquerading as Catholic teaching.

This article will continue in Part II: A Masonic Manifesto.

[1] This automatic excommunication is explicit in the 1917 Code of Canon Law (see #2335, below) and it remains implicit in the 1983 Code of Canon Law (Canon 1374). Anyone who doubts this can also reference official documents dated 17 February 1981 and 16 Nov 1983. The latter is signed by Joseph Cardinal Ratzinger, then prefect for the Congregation for the Doctrine of the Faith.

An English translation of Canon 2335 reads: “Those giving their name to masonic sects or other associations of this sort that machinate against the Church or legitimate civil powers contract by that fact excommunication simply reserved to the Apostolic See.” (1917 Code of Canon Law, edited by Dr. Edward N. Peters, Ignatius Press, 2001.)