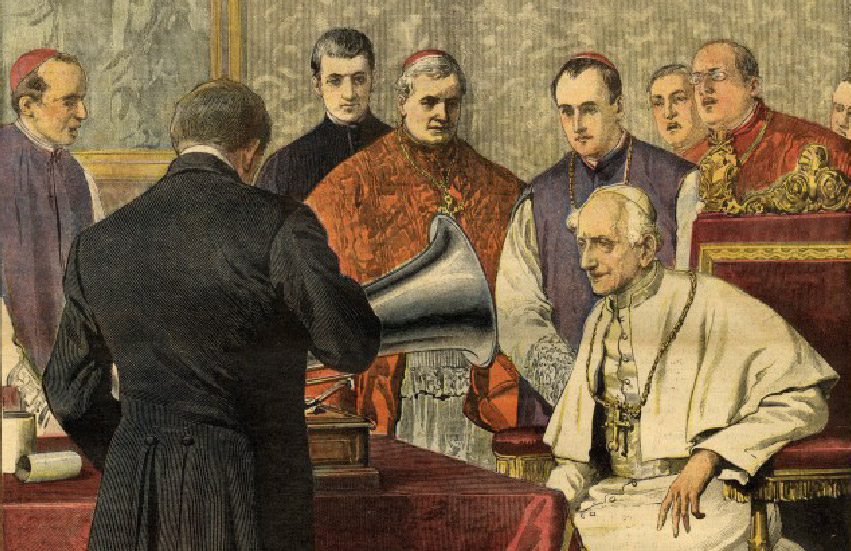 The Kingship of Christ – Part X

(Read the previous post in this series: Religious Freedom)

In our last article, we spoke about the true Catholic position on Religious Freedom and the principles associated with religious freedom. Similar principles apply to a proper understanding of the freedoms inherent to the expression of information. Our contemporary society views the freedom of expression as it does the freedom of religion; that is, a freedom to say or publish anything at all, no matter the content.

I use the term “freedom of expression” rather than “freedom of the press,” or “freedom of speech,” because I believe this more accurately describes our modern media landscape. In the past, print media was the only accessible form of publication, therefore it made sense to approach the issue as a press issue. However, today it is possible to express ideas through a variety of mediums (e.g., print, audio, visual, virtual), therefore a more encompassing term is useful.

Now, some people are “free speech absolutists”. This is a person who believes there should be no censorship for any reason. However, they are in the minority and most people do believe certain restrictions are advisable, even necessary. Common sense should suffice to debunk the absolutists’ false notion.

For Catholics, the crux of the matter is how we navigate between a natural plurality of ideas within a framework of Catholic governance. As with the discussion concerning the civil liberties afforded to non-Catholic worship, the discussion about press-related freedoms is simple to understand and nuanced in application.

Most people and virtually all societies admit certain restrictions on expression. The classic example is that it is illegal to yell “Fire!” in a crowded theatre, when there is no fire. It is simple enough to understand that this untrue declaration would amount to more than a mere simple prank, but instead a potentially violent stampede of frightened persons. Furthermore, public detraction of someone’s character in a way that harms a man’s reputation can constitute a legal offence. In practice, however, issues like this are most often settled by the victim personally seeking legal action, rather than by common application of legal principles by the state.

Limitations of lawful expression like these appeal to the common understanding that all men at least partially share Natural Law principles. A basic principle is that you are not allowed to knowingly say something untrue which can cause harm to others. Both of the examples above help make this point clear.

What Is the Purpose of Speech?

The fundamental question we should ask is why human beings have the power of speech. Ultimately, Natural Law indicates this is so that we can discover and convey that which is true. While experience, perspective and the availability of information can influence what one perceives as true, speech should nevertheless be used to express truth and not intentionally deceive.

We can further employ the Golden Rule. No one wants others to use speech to intentionally deceive them. Thus, one should himself never do this to another.

Unfortunately, civilization today largely ignores God’s laws and even attempts to re-write the Natural Law. Therefore, most secular societies abuse the right of the state to prudentially govern lawful expression, and instead inconsistently apply the threat of legal action for expressed ideas that go, not against truth, but against the “social orthodoxy”.

In some countries, like Canada, these abuses are carried out in the name of protecting people from “Hate Speech.” It should not come as a surprise that a godless state would fail in its understanding of how to ensure lawful expression; therefore, let us look at the Catholic understanding.

Freedom of Expression in a Catholic Society

As is common in the Catholic philosophical framework, the freedoms granted to the press and publishers are governed by good common sense and ordained towards the public good. The Catholic Faith is, above all, concerned with the health of a man’s soul, even more than the health of the body; therefore, the proliferation of true and false ideas through all forms of media is of great concern to the Church.

In essence, ideas expressed through any form of media can be of positive or negative value for the state of a man’s soul; therefore, they should be regulated by the standards applied to any morally licit or illicit action. For example, we would never expect a Catholic society to legally permit recreational drug use, as this would constitute the mortal sin of intoxication. Similarly, it would be lawful to restrict the proliferation of blasphemy, as this would be in violation of the Second Commandment.

The harm that certain forms of expression, print or otherwise, can do to the health of souls has long been understood by the Church. One only has to think of the great harm that Martin Luther did to the Mystical Body of Christ using the revolutionary printing press of his era. Through print media and public sermons, the arch-heretic of the Protestant Revolution led countless souls away from the True Church, and inspired innumerable dissident communities.

If we consider how great is the extent of various forms of expression through modern media, one could argue that strong restriction on public expression is warranted in our day.

Drawing on tradition and the Natural Law, Pope Leo XIII wrote the following in the encyclical Libertas (1888):

“Men have a right freely and prudently to propagate throughout the State what things soever are true and honorable, so that as many as possible may possess them; but lying opinions, than which no mental plague is greater, and vices which corrupt the heart and moral life should be diligently repressed by public authority, lest they insidiously work the ruin of the State. The excesses of an unbridled intellect, which unfailingly end in the oppression of the untutored multitude, are no less rightly controlled by the authority of the law than are the injuries inflicted by violence upon the weak.” (Paragraph 23)

In this address the Holy Father confirms that only true and honorable opinions are granted true freedom in public expression throughout a state, and that lying opinions should be repressed.

In reference to “lying opinions” the pope does not simply mean conjectural opinions about irrelevant matters, but instead erroneous notions that deny truths and doctrines approved by the Church. Furthermore, Pope Leo considers the dangers of public expression of an “unbridled intellect” as something to be restricted, analogous to the protection the state affords to the physical wellbeing of weaker members of society.

In addition he goes on to say: “If unbridled license of speech and of writing be granted to all, nothing will remain sacred and inviolate; even the highest and truest mandates of natures, justly held to be the common and noblest heritage of the human race, will not be spared.”

As with much of the Leonine magisterial corpus, the words of the great pope are as much prophecy as anything. Libertas was published in 1888, and if we consider the atmosphere of what is currently expressed at all levels of public discourse today, the Holy Father was correct.

Nothing remains sacred in today’s public forum, especially the Holy Name of Jesus and other sacred things. The highest and truest mandates of natures, like the truths of human sexuality, are cast aside for absurd ideas that deny basic Natural Law principles.

We could go on, but suffice it to say that the modern conception of freedom of expression has been a disaster and has worked against the Kingship of Christ in our societies.

Let us be on guard against this erroneous idea; and instead of promulgating such a notion, let us insist that only truth be given free reign.

Read the next article in this series: Is There a Catholic Government? (Part XI)

[1] As Catholics, we are beholden to the Laws of the Church and the Commandments of God; therefore, what is moral for our personal lives is already governed by the limits of the Moral Law. It is not practical or even possible to govern how a man may speak or express himself privately; thus, we must encourage a moral life governed by an understanding of what constitutes a sin.